Rona Ambrose and the Great Con War on Marijuana 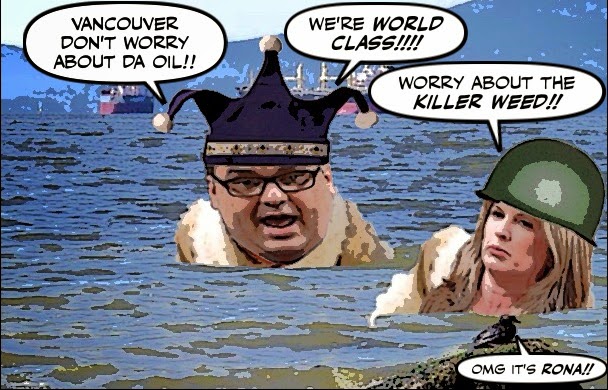 You might think that the Harper regime had annoyed the people of Vancouver  enough recently, with their slow response to the oil spill in English Bay.

And their outrageous claims that it was a "world class" operation.

But no, apparently not. Because now after James Moore's world class buffoon act.

Here comes that other Con clown Rona Ambrose, to declare that the real threat to the city is the KILLER WEED !!!!

In a letter to Mayor Gregor Robertson, federal health minister, Rona Ambrose, says she is "deeply concerned" at the city's plan to discuss a proposal to regulate the growing crop of pot shops.

The letter, sent Thursday, says that "legitimizing and normalizing the use and sale of marijuana can have only one effect: increasing marijuana use and addiction."

Based on the outrageous claim that marijuana is addictive, and that regulating pot shops would make the drug more available to children.

Even though health officials beg to disagree.

"How can we reduce the harms associated with marijuana use? The best way to do that is to apply a regulatory approach, which is exactly what the city is proposing," Daly said.

So as usual, Ambrose doesn't know what she's talking about. And she's the Health Minister eh?

But then like every other Con these days, she's only playing politics.

And as she made clear in a radio interview yesterday, it is just another attempt to go after Justin Trudeau. 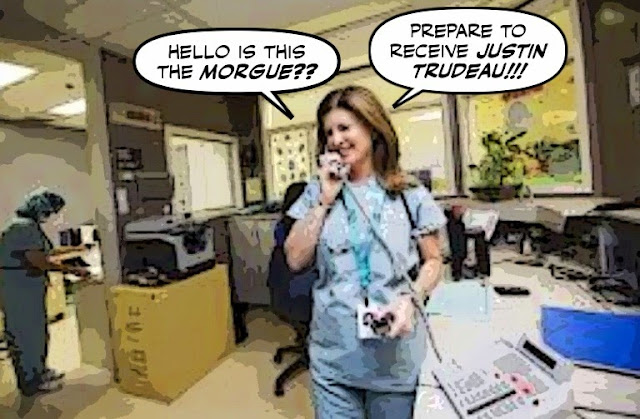 Our government stance is clear, we do not support legalization. I would not support a Justin Trudeau Canada, where what's happening in downtown Vancouver [is repeated elsewhere] where pot dispensaries are opening up on corners.

Another attempt to resuscitate this misleading campaign...

And defend the Con's $7 million dollar Health Canada campaign, that was timed to run just after that attack ad.

(Q) How much money is spent on enforcement of marijuana laws across the country every year?

I can't tell you that. I don't know. All I know is that marijuana is very, very harmful to youth...and that's why we have spent money on an ad campaign and we will continue to do that.

The ad campaign that even the sedate sedated Canadian Medical Association called a political football.

In a late statement issued on Monday, the group responded by saying "the CMA is on record as calling for a public education campaign on the dangers of marijuana use by youth. "We did not ask for a multi-million-dollar taxpayer-funded advertising campaign to be turned into a political football."

But then Ambrose has never let science or harm reduction get in the way of her foul right-wing ideology.

She's made sure that it will be almost impossible to open another supervised injection site in Canada, like the Insite clinic in Vancouver... 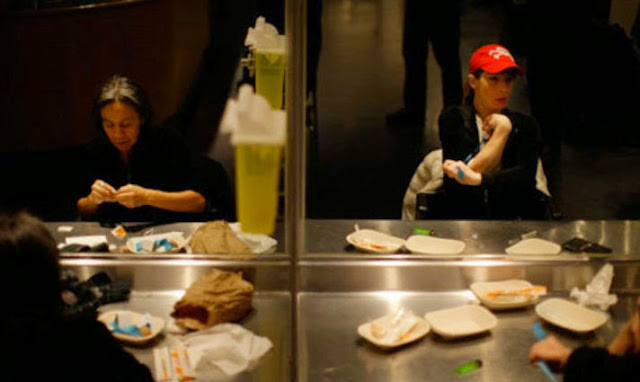 Even though it has saved thousands of lives.

And she is just following the depraved dictates of her diseased master... 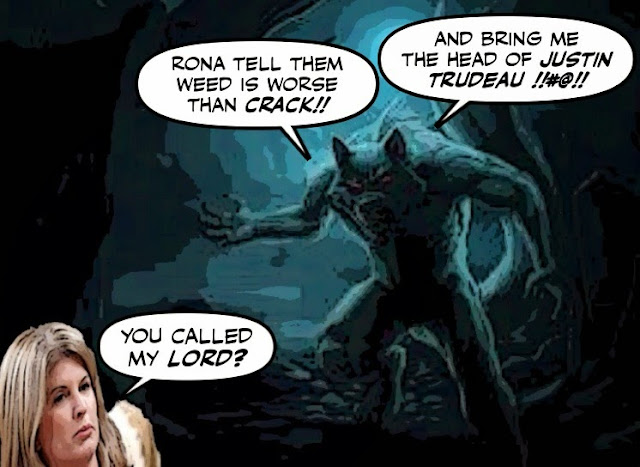 While posing as a Health Minister.

You know, once upon a time many years ago when I first started portraying Ambrose as a village idiot, I used to feel a touch of remorse and wonder whether I was being too harsh...

The Cons are playing politics with the lives of Canadians... 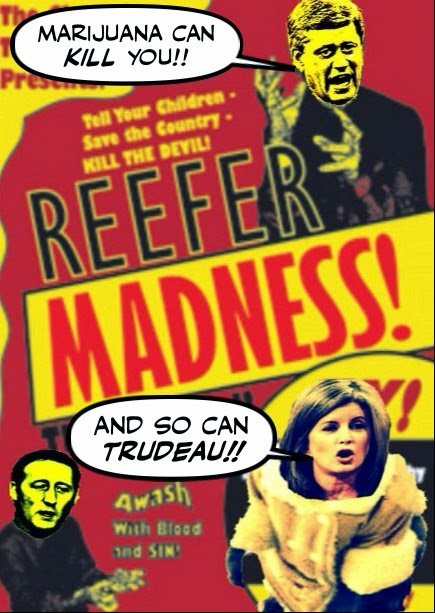 It is Reefer Madness.

And we will not be safe or sane.

Until we fire them ALL...

I wish Vancouver's mayor would tell Rona to STFU! It's just another wedge issue that her and Boss Hog are trying to make political hay out of. Ignoring the facts and issuing threats will only make smoking weed more appealing to youth due to the forbidden fruit aura they're giving it. They probably know this but hey, it could bring more votes eh? Instead of wasting millions on their ridiculous ads extolling the "evils" of marijuana, they could be advising on the responsible use of alcohol. After all, how many times do we read about someone killing or maiming someone in a drunken rage whereas, you never hear about the guy who smoked a joint, got silly, had a pizza and fell...asleep.
JD

Link will not let me recommend this post........I must be one of "those terrorists" eh?

I agree with JD above........maybe if all the marijuana users vote, the Cons would be ousted?

hi JD....the whole War on Drugs is nonsense, and the Great War on Marijuana is simply insane. And yes it is just another attempt to create yet another wedge issue. And Rona Ambrose's views are so out to lunch she isn't fit to be a Heath Minister. Binge drinking is a far greater problem for young people in Canada, but where are the Health Canada ads about that? Rejecting science and harm reduction makes them all unfit to remain in office...

hi Kathleen...sorry about that, I was a bit too sleepy and screwed up the link. But it's fixed now and thanks for trying... :)

Rona, the conservative twit who had what, 3 different appointments by Harper? Qualified for none of them. I seriously think there should be a vetting for the minister of health, not just who became the best pet of Emperor Harper.

I COULDN'T stop laughing when Rona made her speech. If people want to smoke M.J. they will. They can either purchase it in a decent place with a decent product or would Rona and her Cons prefer people buy junk laced with other junk. Oil spills are a lot worse for our health and environment than smoking weed.

Most of us who grew up from the 70s on, smoked weed at one time or another. we didn't move on to stronger drugs, we didn't go crazy. We became the middle class of Canada and are now the aging baby boomers. Rona and her Cons need to get a grip. Of course her spewing such garbage around might have simply been a distraction from the oil spill. Whatever the Cons are trying to do, its just too funny for words. This is B.C. and wwed has been a part of our province for a very long time.

Let the Cons focus on health care or the lack there of in Canada. Let the Cons deal with the environment and dealing with chemicals which are produced like meth, crack, etc.

I don't know any one who moved from weed to harder drugs. I do know hard liquor drinkers though who moved to coke and more than one. Its simple. Those who move on, will move on to stronger drugs regardless of the laws. Society has been getting high since humans were on earth. Stevie and Rona aren't going to stop that.

If an election were fought over pot, Steve and his Cons might actually loose the election.

The American states which have legalized the sale of weed are doing fine. They haven't fallen off the deep end of the world. What they are doing is getting a lot of tax money with little complaint from their citizens. stevie is so driven by his religion he can't see straight. Its o.k. to bomb innocent people to death in other countries but its not o.k. to smoke some plant anyone can grow in their garden. YA, right there Rona, now get some health care for the north of Canada and stop talking nonsense.

hi Stoneman....believe it or not the village idiot has now had SIX ministerial titles. I know because I had trouble remembering any of them so I looked it up on Google. I think it's safe to say that just about ANYONE can be a Harper minister. But yes, you might hope that a Health Minister might know what he or she was doing....

hi e.a.f... yes I too thought the idea of Rona trying to change the pot culture in Vancouver totally ridiculous. The city and the police seem to be on the right track, and Ambrose should go back to Ottawa and mind her own business. What also offends me is that she's sounding as if she's not only impersonating a Health Minister, she's pretending she's a Justice Minister. Which is truly frightening. This reefer madness has gone on for too long, and it really needs to end...

Marijuana has a long history throughout the world. Saw this list of famous people who smoke marijuana and came to know that weed was used abundantly some time back. The other day heard about my uncle using it too.

I agree with you on the point of Binge drinking. And alcohol as a whole is WAY much more dangerous than Marijuana, and even the Universities are coming out with the facts that MJ actually has therapeutic properties. I did a presentation in College talking about THC in combination with other drugs to treat brain cancer. THC and cannabinoids have the ability to halt or slow down the progression of cancer. Alcohol doesn't have those kind of properties and in fact it has been linked to actually causing cancer.

I also like the above picture of our current Village Idiot that is Rona Ambrose. Why do these people feel like they can do anything and tell us what to do and what not to do? If they really want to keep our society safe then alcohol and cigarettes. These two drugs have caused numerous deaths and still counting. Why does our society have it all backwards in pretty much every aspect of our lives.