The Harper Regime and the Con Artist Budget 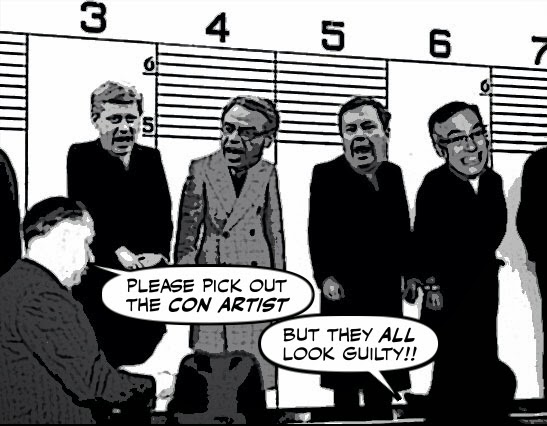 It won't happen of course, not in this corrupted Harperland, where decency goes to die.

But if there was any justice, Boss Harper, Oily Joe Oliver, and the rest of the Con mob would be in a police lineup.

Preparing to be charged with crimes against democracy and electoral fraud.

For conspiring to bribe voters, and trying to con Canadians into believing that what they presented us with yesterday was a budget.

When in fact it was nothing more, as John Geddes points out, than a 518-page campaign pamphlet.

To call a federal budget a political document is a cliché. What else would the annual unveiling of a set-piece plan for taxing and spending be? But in this election year, with every eye in Ottawa squinting ahead to the Oct. 19 fixed date for Canadians to go to the polls, Finance Minister Joe Oliver’s budget is even more political than usual—a 518-page campaign pamphlet.

And the only reason they were able to balance the budget was by slashing government jobs and social services, holding a fire sale of government assets.

And most unforgivably by raiding the so-called rainy day fund... 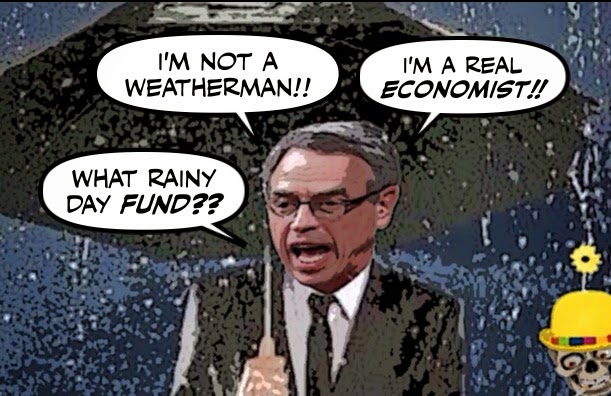 But the way he managed to write this budget in black ink wasn’t, strictly speaking, frugality. In fact, Oliver had to take the contingency reserve—the cushion built into the budget against unexpected economic woes—and shrink it from $3 billion, where it was set as recently as last fall, down to $1 billion. If he hadn’t given himself that $2 billion bonus, Oliver’s 2015 fiscal plan would have remained in the red.

Can you believe that? Siphoning money out of a fund designed to protect us from natural disasters like a flood in Alberta or an earthquake in BC.

Clearly, the government is hoping Canadians will be too busy tallying the benefits the budget contains for them to fret about how Oliver avoided posted another deficit.

Even though Jason Kenney said that would NEVER happen... 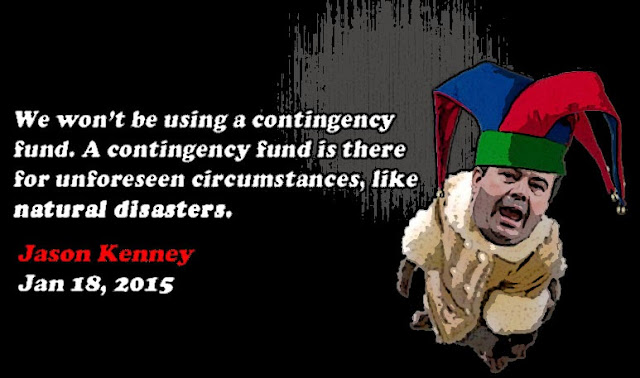 And his depraved leader would have us believe that only HE can keep us safe? 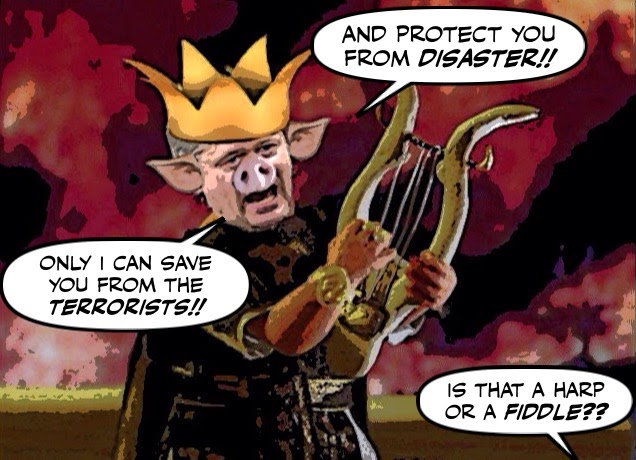 Are Harper and his Cons just criminally irresponsible or are they INSANE?

But then of course it is all fraud, just smoke and mirrors... 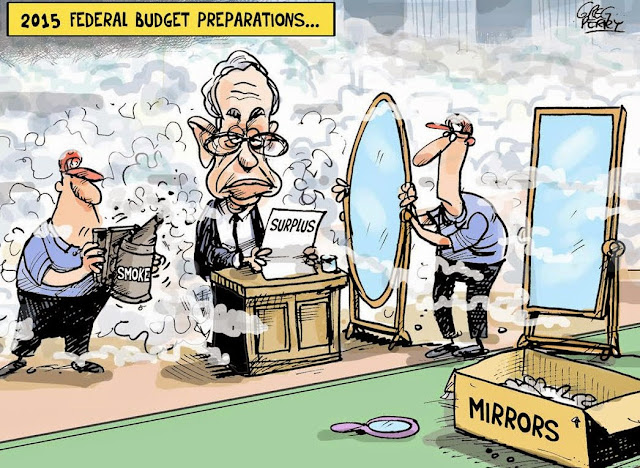 A hollow piece of propaganda that does nothing to boost our struggling economy.

In the end, this budget is 518 pages of mainly nothing. There are some issues, such as climate change, that are not addressed at all. There are others, such as aid to manufacturing, that evaporate under scrutiny.

None of this should be a surprise. The Harper Conservatives don’t approve of government. In their heart of hearts, they would prefer that it do nothing. Which, except for vote-buying, is largely what this budget does.

And is nothing more than a blatant attempt to buy the election with OUR money.

Or as I said last night, the porkiest and most shameful hog fest this country has ever known... 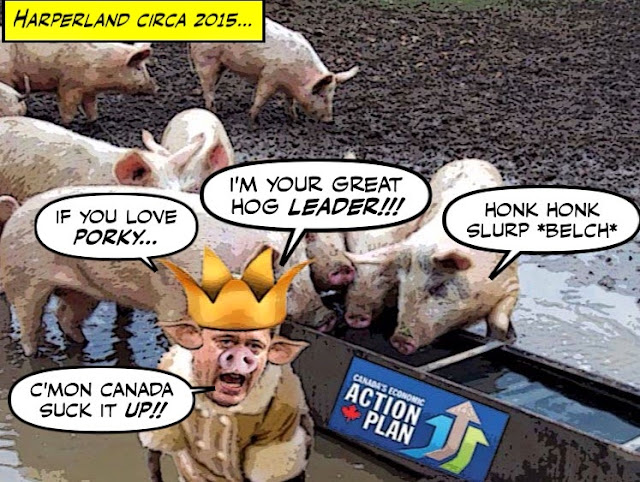 For that's how low we have fallen.

And the good news? Harper and his mob are rowing in the wrong direction.

While balancing the budget may be Finance Minister Joe Oliver’s top priority, a new poll shows Canadians put jobs and the economy first. The poll of 1,005 Canadians conducted by Ipsos on behalf of Global News found 59 per cent of respondents prefers a budget that invests in jobs, the economy and social programs even if it runs a deficit, while 41 per cent prefer a balanced budget.

So while they may receive a small boost from this most political of budgets, it will almost certainly prove short lived.

Because their numbers are also heading in the wrong direction.

And the real state of the economy, and their scandals, will come back to haunt them... 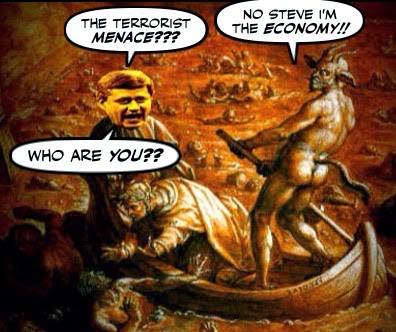 And if the opposition is able to portray Harper and his foul Cons as an old, tired, and corrupt government that would put its interests before the interests of the country, while turning us into a police state.

We will still defeat them. 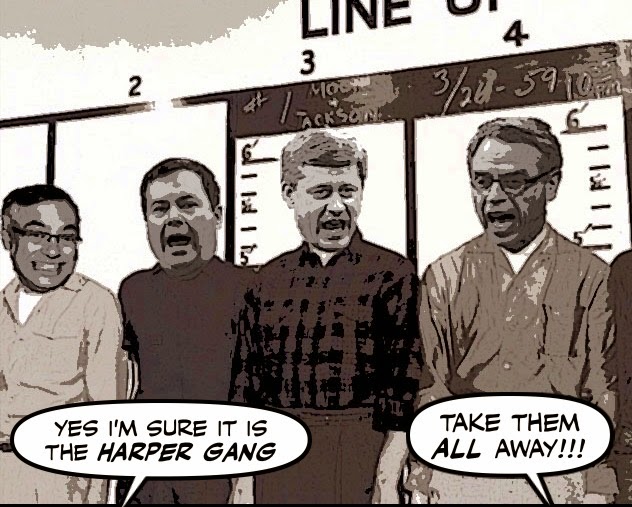 The budget. What a sham. Not just 'smoke and mirrors' but fraud.
Surplus? More like 'Sir Puss' a vile and disgusting leper-like tragedy that we all have to pretend is pretty and wanted.
They give a trivial amount to seniors in the form of RRIF changes and will advertise the hell out of it because old people are the only ones watching mainstream mindless propaganda networks.
They steal from the collected funds of average working Canadians (the EI fund) and spend it on tax cuts for the rich. It's the 'anti Robin Hood' budget: steal from the poor and give to the rich.
Unless the Dippers and Fibbers get their s&!t together and find a way to fix this election for ALL Canadians, we're doomed to repeat the last 10 years, as our country's election system is broken - and the Cons know it!

Wasn't it nice of them to calculate their budget on the premise that the "kicked while they're down" Public Service's disability and sick leave provisions are gutted while they are still supposedly bargaining about it. It's one thing when they put out erroneous data re: sick leave but this truly shows what a bunch of bullying bastards they are.
JD

By using the contingency fund to balance their books they admit they are in the midst of a crisis. I am a senior and I don't believe seniors are prepared to trade their grandchildren's futures for a few dollars. I want to see jobs for them and good educational opportunities. And I want to see the danger of climate change and pollution addressed for their sakes and the sakes of their future children.

I'm just waiting for the Health Care Bomb to drop, then maybe a few Seniors will finally wake-up!

When you are over six trillion dollars indebted where is the surplus? People are stupid enough to buy this bull shit?

I totally agree........it is another Canadian Disgrace!

If you’re happy with Tuesday’s federal budget announcement, we bet we could describe you without ever having met you: you’re likely an older Canadian, well off financially, you have investments and you prize law and order.
Perhaps you were a business owner or you were in management.

One pundit said on CBC Radio yesterday afternoon that in order for the opposition parties not to be boxed in by Harper's "balanced" budget, they should admit out front that if one of them forms the government, they WILL run a deficit. (And say the additional money for programs would come from raising taxes, but NOT on the middle class). Start with raising corporate tax levels up to the G7 average. But both Mulcair and Trudeau said yesterday in interviews with CPAC's Peter Van Dusen that if elected, plan to balance the budget.

hi anon...yes it is a shameless budget, all governments use them to try to appeal to voters, but this budget is shameless because it is 100 per cent political, makes no economic sense, and does nothing to deal with the serious problems we face. And of course I agree, progressives have to get their act together, or he just might buy enough Canadians to win himself another four years...

hi JD...yes it seems the scummy Con campaign will climax with an assault on the public service unions, in true fascist style. They'll pit the mob against the workers, and use a strike they deliberately provoked to create yet another wedge issue. They really are human scum, and I'e never seen a government as morally depraved as that one...

hi anon...good for you that is the way all decent people should behave. The Cons are counting on greed to make people forget their sacred responsibility to those who will inherit the earth after we've gone. And it couldn't be more shameful and utterly disgusting. Their lust for power knows no limits...

hi Kathleen...well the healthcare time bomb is ticking. The Cons have done all they can to kill our medicate system by neglect, and now they are preparing to strangle it to death...

hi Mogs...yes good question, the Cons never mention the debt because they have done almost nothing to bring it down, and it's been offloaded on to the backs of future generations like so many other things. Pushed into the future so the Cons can make their shabby record look better, and try to fool Canadians into thinking that they know what they're doing...

hi Kathleen...I'm sorry to hear that your rent is going up. I know when you're living on a pension every dollar counts. And one of my most fervent causes is to raise the CPP so it can provide seniors with more money and dignity. It could easily be enhanced as the Ontario government is trying to do, and for refusing to help the Harper government should be jailed...

hi David...Thomas walk has a good point in his latest column. He points out that a lot of the money the Cons are spraying in all directions is really chicken feed, so the opposition parties don't have to worry about it. And since the Cons are claiming a surplus that should give them all the room they need to make their own promises....

I was wrong about the six trillion it is actually .614 trillion or $614 billion sorry for the confusion my bad.

I apologize for the misinformation.