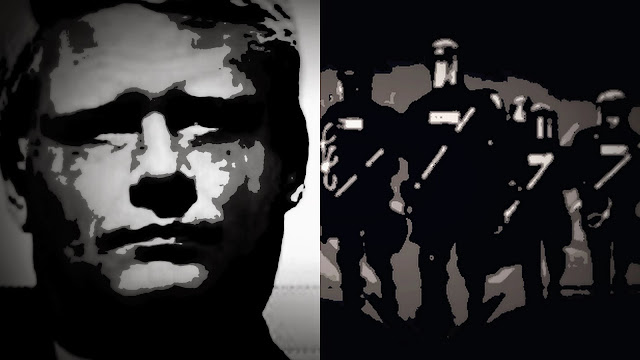 Sometimes in this big beautiful country it seems like we are too small, too insignificant, too weak or too complacent to change anything.

Helpless to stop the monstrous leader who is tearing its guts out, trying to change it beyond recognition, and trying to scare his own people into submission.

But somehow we summoned up the strength to fight Bill C-51, Stephen Harper's plan to turn Canada into a police state.

And now a new poll suggests that the bill has never been so unpopular.

As Stephen Harper's controversial anti-terrorism bill clips through Parliament, en route to becoming law by the summer, public opposition is threatening to take wind out of the prime minister's sails.

Of the Canadians who are aware of C-51, 56 percent oppose the bill while just 33 percent endorse it, according to a Forum Research poll provided exclusively to VICE News.

The terror bill is tanking, losing eleven points in two weeks. And although most Cons still support it, that support is weakening.

The news gets worse for Harper, as one of the biggest drops in support for the bill is amongst his own kind. Of those who said they support the Conservative Party, 72 percent support Bill C-51—that's a nine point drop since Forum asked earlier in March. Meanwhile, 13 percent say they disapprove of the bill.

And that must have Great Desperate Leader in a panic almost a great as the one caused by the Mike Duffy trial.

And what it tells me is that when we make our protest visible to other Canadians... 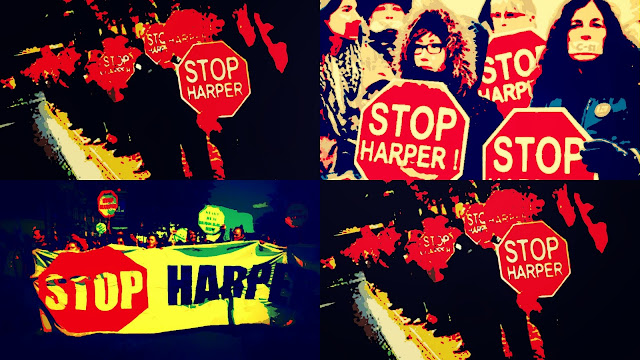 Or noisy enough to get their attention.

And then make a serious attempt to educate them about what's in the bill, and why it's so dangerous.

We can take the wind out of the tyrant's sails.

And when he rams the bill through to the beat of a fascist drum, against the wishes of most Canadians... 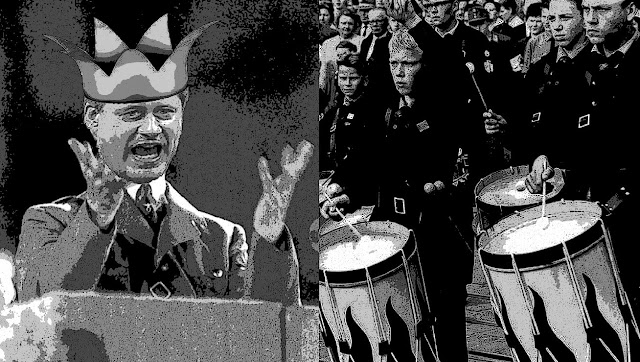 We can make him pay for it, Big Time, in the upcoming election.

So good work everybody. We are a quiet people, there's nothing wrong with that. But when you add complacency it can be a fatal mix.

So we need to keep up the pressure on the internet and in the streets, keep educating people with initiatives like this one.

Or terrifying Harper further, by letting his Con MPs know how YOU feel about their terror bill.

Those are small things, those fighting the bill are tens of thousands not millions. But every sign of resistance counts... 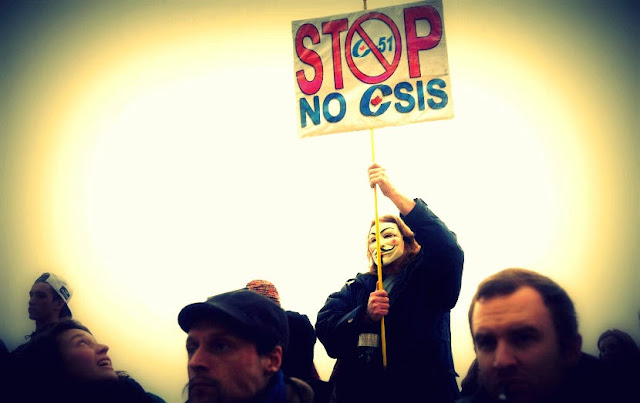 Because at this time in Canadian history resistance really is existence.

And when we break the silence, and show others why they should care, more of them will join us.

We will defeat the Cons. We will scrap the bill.

And the tyrant will be stopped... 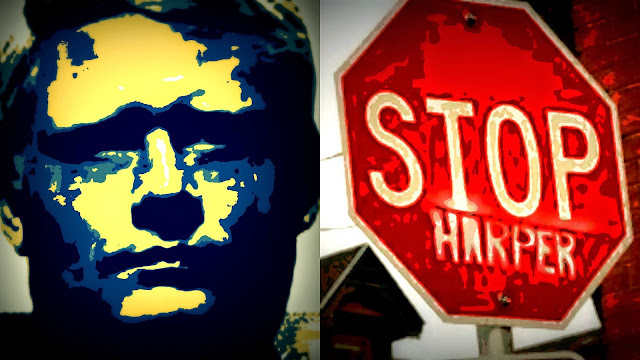 What maybe making the bill so unpopular is its getting more exposure and those doing the exposing are those 4 former P.M. Hate or love him Mulroney has a following, as do the 2 Liberal P.M.s. Joe Clark wasn't in office long, but he is considered by many to be an Honourable man. there is the not small matter of all those law professors, former judges, etc.

as the stories get about i.e the senior and health sciences's prof getting calls from the RCMP about their lawful activities, it is getting talked about at dinner parties, its getting exposure in small papers and blogs. This bill could be the undoing of harper, not by one big event, but by a thousand small cuts.

It will take only a few house calls from the RCMP to people who write letters to the editors, blogs, etc. to sink this bill once it has passed. there is nothing more scary for a small town than to have one of their own visited. harper forgot about that. the RCMP and CISIS has about 5 months to "fxxk up" and I'm sure they will. Then young Trudeau will be ever so sorry he voted in favour of this bill.

Billl c-51, the rumours regarding conscription, a couple of fxxk ups and the coalition might be Greens and NDP, with the BQ holding a few seats. Libs and Cons, in the dumper. It won't be about the economy or the war, it will be about the arrest of ordinary canadians and boos harper won't be able to reign in this police state.

bill C-51 can be used against criminal organization. now some may think that is a good idea, but others will get to thinking, who will be next.........

hi e.a.f...According to a recent study people in this country spend more hours on the internet than any other people in the world.So how Harper ever thought he could threaten internet freedom and get away with it is simply beyond belief...