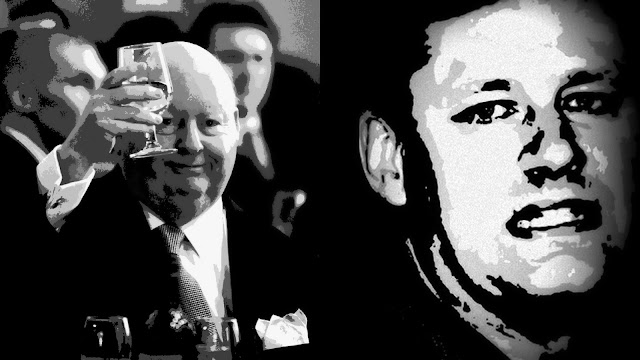 If you've been following the trial of Mike Duffy, you know that the prosecution is having trouble making its case that he broke the rules, because it seems the Senate didn't have any.

And that the judge is getting impatient.

But as Michael Harris points out while the case against Duffy is in shambles.

Three weeks into the trial, Judge Charles Vaillancourt spoke for a lot of Canadians when he stung the Crown with a comment about the administrative swampland of Senate expenses and the unfocussed case against Duffy. So far, the Crown’s evidence, (and there is a long way to go) about the rules applying to what senators are, and are not allowed to do, is as clear as mud.

The case against Stephen Harper couldn't be stronger.

And his refusal to accept responsibity for bending the rules to appoint Ol' Duff couldn't be more absurd.

One hundred gallons of Kool Aid chugalugged in a minute are required to believe Harper’s absurd attempt to say, for the hundredth time, that the prime minister of Canada is responsible for absolutely nothing when things go south politically.

Visions of Nixon: If your prime minister does it, it’s not a crime. 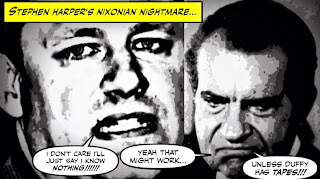 And since there wouldn't have been a scandal if Great Nixonian Leader hadn't appointed Duffy, he needs to be forced to explain himself, in the witness box, under oath.

The Crown has already gainsaid the PM on the issue of Duffy’s constitutional eligibility for the Senate. The Crown has said that he probably wasn’t eligible for the appointment. Unless the Privy Council and the GG’s office are full of sycophantic dolts, they would have told the PM the same thing. So why was the appointment made? We need Harper’s evidence under oath in court — the one place where political marketers don’t have the last word. Well placed sources tell me that the PM knew well about the hazards of appointing Duffy from PEI, but said the critics “would get over it.”

Because I'll like to see how much makeup Harper would feel he needed to try to explain that one... 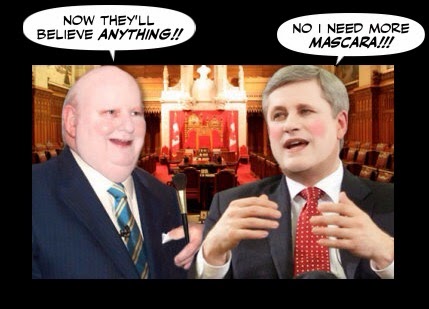 And with the trial threatening to continue forever, Harper must be sweating like a pig, at the thought that he could be called to testify in the middle of an election campaign.

After, or just before Nigel Wright tries to explain the "good to go"

And around the same time that Duffy gets to tell his version of events.

Or tell all those dirty stories about really goes on behind the curtain in the PMO... 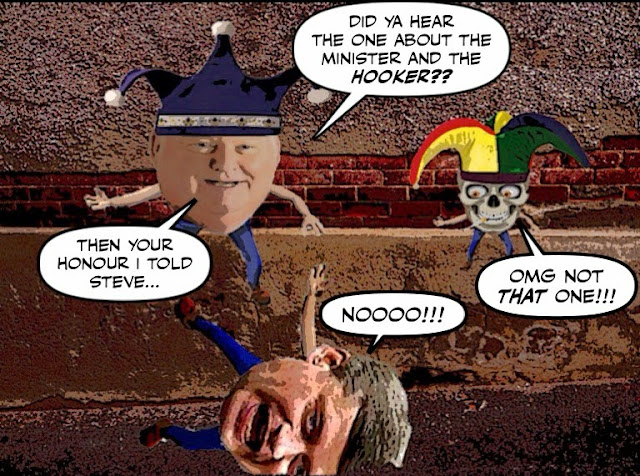 Because Harper would never be able to recover from that fatal combination so close to an election.

So the scandal he created with his appalling judgement and his failure to follow the rules.

Will  almost certainly come back to haunt or bite him.

And with a little bit of luck it will help us destroy him...

It really does come down to great leader's judgement, but sadly the focus is on Duffy and the proof positive that harper should abolish the senate, you know, to save the taxpayer's money or some such thing. Teflon steve has so far distanced himself from Duffy (and Wallin, Brazeau and all the other misfits) that he is still smelling like a rose and we may be stupid enough as a country to give him another 4 years.

Hey Simon, how about a post on what going on in Alberta and how if Notley becomes Premier Harper's head is likely to explode.

One would have to be extremely dumb to think he who played fast and easy with the rules and law is suddenly ignorant to the facts. Harper knew the rules and he broke them. He wanted Duff to prostitute himself in the name of the Cons and he did. "Best Senator Ever" was given as reward, unfettered access to the taxpayer trough. Problem was, Duff couldn't pull himself away from the slop trough and the other little piggy's got jealous and "squealed" on him, "wee, weee, oink snort oink". That's when Harper summoned the magic bus and that little piggy never made it to market, he stayed home, in Kanata.
JD

What kind of Kool-Aid will we have to swallow to be made to believe the F-35 program is still good value for Canada?

Best letter to editor I've read on the matter:

So why isn't Harper on trial?

Harper will go on trial in October when he faces either a really ignorant and stupid Canadian public (what he wants) or an informed public (which will vote him out).

hi bcwaterboy....don't despair, the Duffy trial is taking while to spread its wings, but it is creeping closer to Stephen Harper. For Bayne is clearly putting the Senate itself on trial, and sooner or later he will have to explain why he appointed Duffy AND his good friend Carolyn Stewart Olsen even though they did not meet the residency requirements, Also the fact that the Wright testimony and Duffy's day in the witness box might come quite close to the election will hurt him and knock his campaign off balance. It will be a brutal struggle but I think we can still win it....

hi Kathleen...an NDP win in Alberta would definitely have a big effect on the election. But although I'm hoping for it, I'm afraid I'll only believe it when I see it...

hi Gyor...I will write a post on it, I'm just waiting for the polls to firm up, and see how Prentice's desperate fear campaign develops. As I just told Kathleen if Notley is successful it would have a huge effect on the federal election. But Alberta has disappointed me for so long, I still dare not get my hopes up...

hi JD....of course he knew the rules, just like he knew the rules for appointing Supreme Court judges, but also chose to ignore. It's called the arrogance of power and it will in the end destroy him. The trial is only swarming up and the best is still to come...

hi anon...good question, what kind of Kool Aid would he serve us, and what kind of sedatives will we have to give the pilots condemned to fly that disaster on wings? It's expensive, it's unreliable, it only has one engine, what are we waiting for to cancel the contract.?

hi David...that is indeed a good letter and this sums up the situation excellently:

It's good to see letters from ordinary people like that one, and it should encourage all of us...

hi David...be patient that is where Bayne is taking the trial. First he will prove theSenate had no rules, then he will prove they were all in the same trough, and then he will attempt to prove that the man who appointed Duffy and Carolyn Stewart Olsen also broke their rules so how could anyone be guilty of anything when they are ALL guilty of something. As I said, the best is still to come...

hi anon...you're right the real trial of Stephen Harper will be the next election. And although it will be a harder struggle tan I once thought, I'm still confident that the verdict of most Canadians will be a harsh one, and he will arrested out of office...

"What kind of Kool-Aid will we have to swallow to be made to believe the F-35 program is still good value for Canada?"
Especially when you read up on the war game trials against the Russians' "Flanker" fighters like the SU 30 and SU 35. They've repeatedly proved the far superior weapons against the lame duck F35.
We been had!!!

You can believe it now!