Stephen Harper and the Summer of Protest 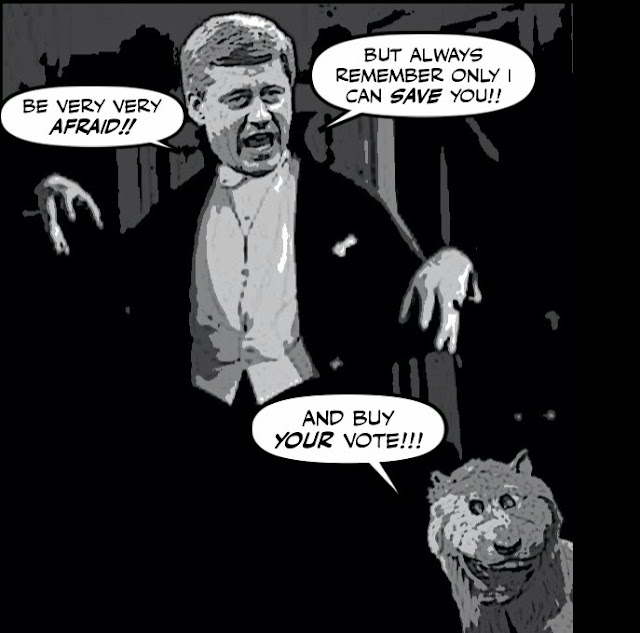 At a time when Stephen Harper is trying to drag us into his monstrous darkness.

By using fear as a weapon against his own people, whipping up war fever for crass political purposes, and trying to bribe us and brainwash us.

While preparing to turn us into a police state, and sucking the life blood out of this country, its democracy and its values.

It's great to see the noble and idealistic Brigette De Pape still standing up to him, still trying to Stop Harper. 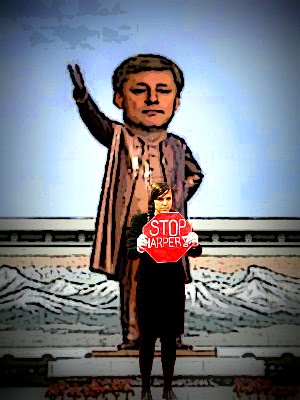 She wants a government that reflects the values of her generation and future generations. She wants an agenda that includes an equitable, compassionate society; treats the environment as a priceless public asset; addresses youth unemployment and student debt; respects the views of women, workers, indigenous peoples and racial minorities; and brings the nation together.

Still standing up for our values, and most importantly still trying to get more young Canadians to vote. Because they can make a difference.

The Tories won nine of their seats by a margin of less than 1,000 votes. They captured Nipissing-Timiskaming, for example, by just 18 votes. Most of the 5,300 students at Nipissing University stayed home. They won Etobicoke Centre by just 26 votes. Had a few more students from the University of Toronto, York, Ryerson or Humber College showed up at the polls, they could have tipped the balance.

And with polls suggesting that Harper has managed to recover most of the senior vote he had lost, we need them more than ever.

Just like we need to keep building our Great Stop Harper Movement all over Canada. 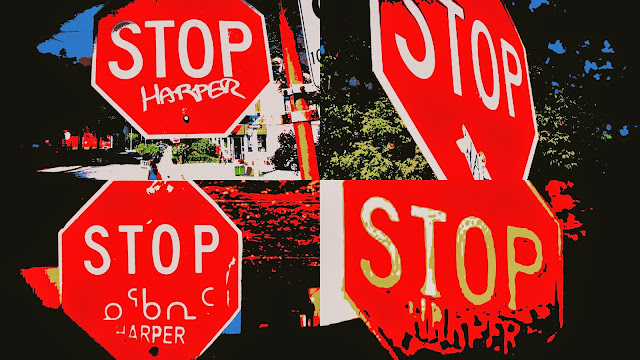 Because not only can a movement motivate more Canadians young and old to vote. It can also help counter the massive barrage of porky ads that the Con Ministry of Propaganda and Disinformation is about to unleash upon us.

And help us get OUR message out... 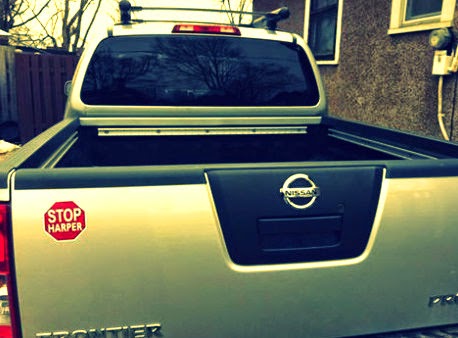 It doesn't have to be a huge deal. My Great Stop Harper Movement at the present time due to exams and other things, consists of four friends, a neighbour and his dog.

But when we all come together, as the Quebec student movement and the labour unions did last Thursday.

It can be an awesome sight...

And it can make even a tyrant tremble in his boots.

So let's let him know that we are not afraid.

Let's make this our summer of protest.

And let's send that scary Con vampire and his fear campaign back to the place they belong... 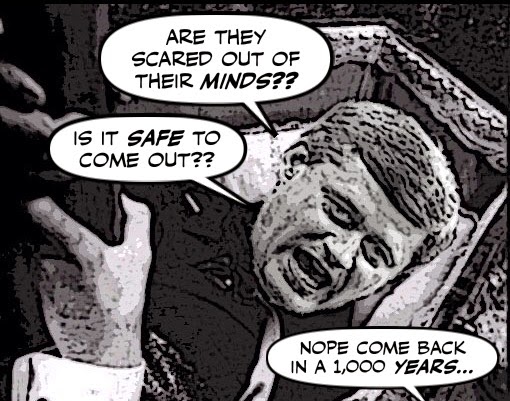 My grandchildren are primed to vote. Two of them just have to figure out how because they will be away from home. Not necessarily easy anymore. Young people will need to be educated on how to get the proper documentation if they are away at school..

Brigette De Pape is most definitively a heroine of this century. How did she come up with a Stop Harper campaign as a child? Brilliant and well done Brigette....

You are amazing and have kicked off STOP HARPER signs across Canada, well done dear.

"Stephen Harper should take note of the fact that 900 highly skilled, highly motivated progressive activists got together in Ottawa and left today with a game plan," From --->>>

Ya hey lets add as much coal as we can to make this particular train run faster and stay on track to eviscerate Harper and his clown gong show...

This article from The Tyee [Tyee is a First Nations coastal people word for a salmon over 30 lbs] gives me positive hope on defeating Harper. The intellectuals are starting to band together to defeat the Harper gong show all smiles ;)

A company that raises funds for good causes (say, environmental issues) could make a killing with "Stop Harper' stop signs..haven't seen any for sale but would be glad to buy them if the money went for something besides the rich getting richer...

We need MORE Brigette De Pape's here in Canada! Also those who have Never voted before and will be eligible during the next Election should make it their Priority to get registered and placed on the Voter's List Before the Election!

Brigette De Pape and Ilona Dougherty are leading the way!

Vice Media will launch a 24-hour TV channel in Canada in 2015
http://www.canadianbusiness.com/companies-and-industries/vice-tv-network-launching-2015-with-rogers-communications/

"We wanted to build a powerhouse for Canadian digital content focused on 18 to 34-year-olds," said Guy Laurence, President and Chief Executive Officer, Rogers.

Justin Ling is VICE Canada's correspondent in the Parliamentary Press Gallery. He focuses on foreign affairs, security, intelligence, privacy, and general screw-ups by people in charge.

Brigette De Pape's courage in holding up that sign in the HoC was and still is extremely inspiring to me. I'm sure Harper has or is still trying to punish her for it as we all know what a vindictive asshole he is.
What we need to do is get our college and university educators to start drilling into their students that the very fabric of this great country is threatened as never before by the monstrous Harper. They need to urge, compel and persuade them to vote to save this country from its destruction if Harper gets another majority.
JD

Once the Cons are defeated at the polls, I'd love to see a campaign to nominate both Brigette De Pape and Ilona Dougherty for the Order of Canada.

De Pape was awesome in her courage agreed anon 1:31 we need more young ones like her to save Canada.

hi anon...yes that is a big problem, especially since the Cons have made changes to the election ad specifically designed to make it harder for people who don't support them to vote. Young people as well as others do need to be educated about the right documentation. But the good news is that I have never seen so many groups trying to do just that. And I will certainly do my part to get that message out...

hi Mogs...I'm not exactly sure how she came up with the STOP HARPER sign but I think it came out of the Occupy movement. I was very inspired by that movement, spent a lot of time at their camp in Toronto. And although it was temporarily defeated by its almost too democratic nature, and the police, it was a source of many good ideas, and of course it still lives...

hi anon...I love that story and your enthusiasm ;) That's the way to go. We have been too silent in our usual Canadian way for too long. But we have been taken advantage of and now it's time to speak out, and hopefully take our protest to the streets. What the Cons have been doing is criminal and un-Canadian and we do need to stop them...

hi mizdarlin...there are a few companies already merchandizing stuff, I'll give them a plug one of these nights. Although our little group has decided to make our own signs with red paper and a stencil. That way if they get torn down we don't have to exhaust our very limited party money to replace them...;)