Doug Ford and the Harperite Conspiracy 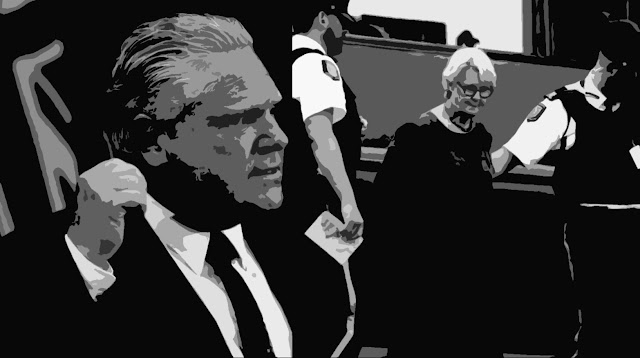 It was a scene I never thought I would see in Canada. It could only happen in Doug Ford's Ontario.

And it can only be called fascism.

Ontario Premier Doug Ford’s government has tabled legislation that uses the Constitution’s notwithstanding clause to push through a bill slashing Toronto council in half because of a judge’s decision earlier this week to strike down the law because it violates the rights to free expression and to elect effective representation.

With the official opposition being expelled from the legislature, old people being led away in handcuffs, and the bestial Ford acting like Big Brother. 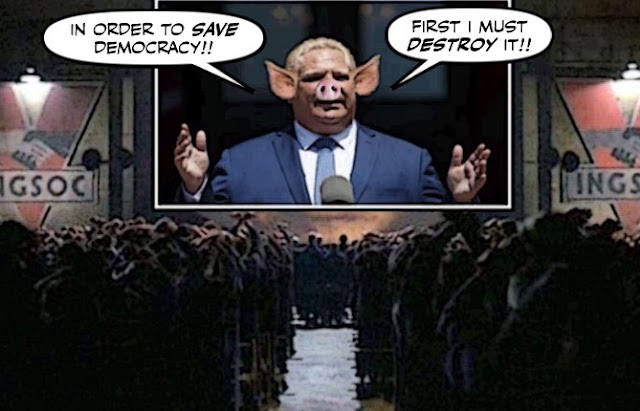 And to make matters worse, and even more disgusting, there was weak Andrew Scheer and his Cons backing that assault on democracy.

The federal Conservatives say Ontario Premier Doug Ford has the legal right to use the Constitution’s notwithstanding clause to move ahead with plans to cut the size of Toronto city council.

In the most cowardly manner possible.

But then of course they would, because the people giving Ford his marching orders are some of the same people who worked in Stephen Harper's PMO... 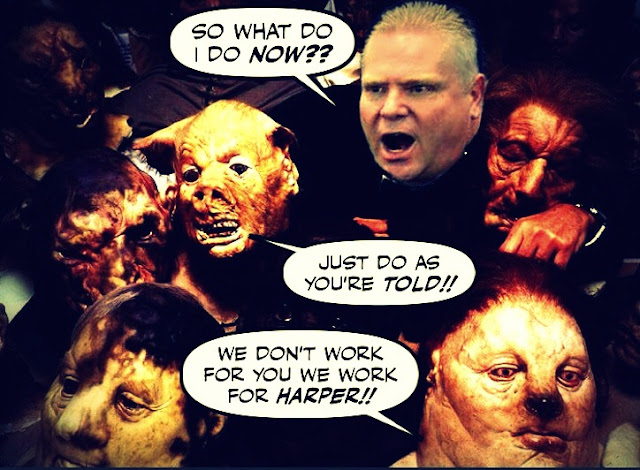 The so-called boys in the short pants like Stephen Lecce... 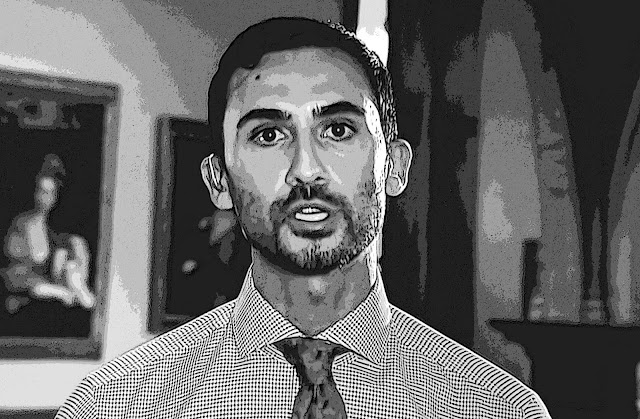 Once he was Harper's Director of Media Relations, Communications Strategist and National Campaign Spokesperson.

And as Paul Wells points out, the Harperites are on a mission and in a hurry.

It took Stephen Harper most of a decade to shred moderate credentials he had worked hard to establish. His staffers, recently decamped to Queen’s Park, apparently wondered all along why he dawdled so and are now determined to get the job done much more quickly.

For those sinister fanatics don't just see the notwithstanding clause as a way to impose their will on Ontario, they also see it as a way to attack Justin Trudeau.

Premier Doug Ford, whose Progressive Conservatives are already fundraising off of his decision to override Charter rights to shrink Toronto council, wants to use his invocation of the “notwithstanding” clause to contrast his “bold leadership” style with Prime Minister Justin Trudeau’s handling of pipelines.

“The thinking is that (the premier) is prepared to stand up to the courts unlike Trudeau,” confided one high-ranking PC insider, who spoke on condition of anonymity in order to disclose internal discussions.

Even though, like their dumb leader, they don't know what they're talking about... 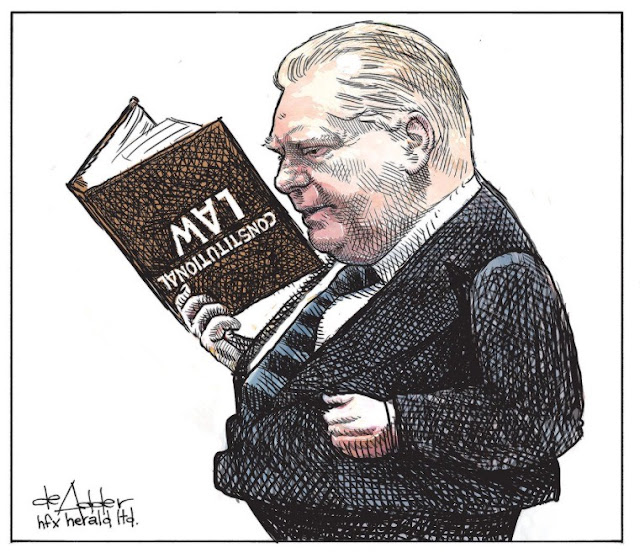 “This is showing bold leadership. Trudeau could have (invoked the) notwithstanding (clause) on the pipeline, but he didn’t,” the source said, referring to the Federal Court of Appeal’s ruling last month that halted the expansion of the Trans Mountain pipeline in British Columbia. (In fact, the prime minister could not do that because it was not a Charter challenge.)

Which is of course what makes them such a threat to the decent people of Ontario.

For today they are going after democracy, tomorrow they'll go after women's rights, gay rights, social services, and medicare.

But at least now we know that Stephen Harper's legacy is still poisoning this country. 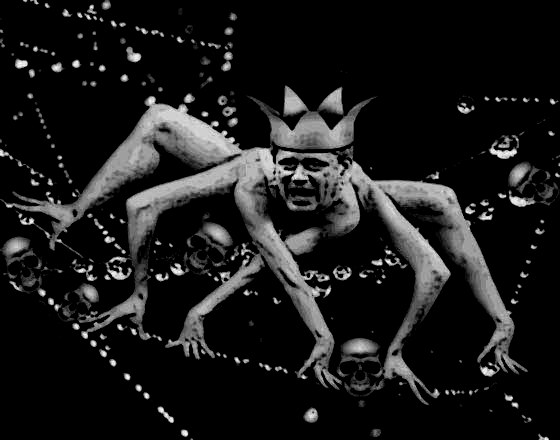 And that if we are to save our Canada, we must expose and destroy the Harperite conspiracy.

Before as I warned yesterday, it spreads all over the country...

And right now that means resisting Doug Ford by whatever means necessary.

With the aim of eventually sending this fascist beast back to the hellish zoo where he belongs... 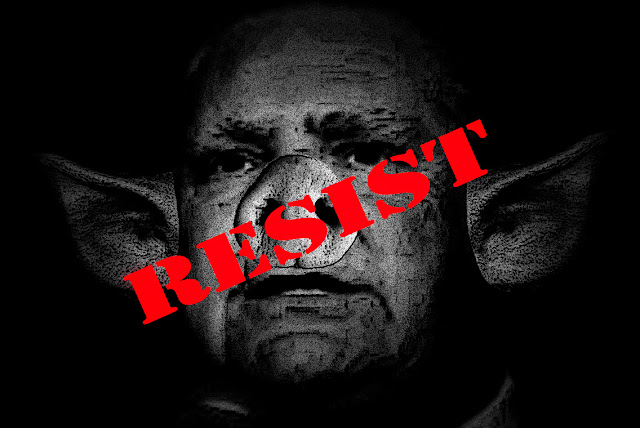 Meanwhile, where are the adults in the Ontario PC party? If they are not prepared to stand up to Ford then they will go down in the next election.

Doug's an idiot, a bully, and a thug, but of course everyone knows the defecation habits of bears in the woods. Three years into office, two of them proving himself incredibly adept at staring down the biggest bully in the world south of the 49th, and Harper's goons are still pushing that old saw about Justin being a meek and mild, wimpy, low-energy, sad, limp-wristed weaksauce soyboy loser? They do know his old man made his name and kickstarted his career staring down gun-toting radical separatists, don't they? Oh, right, they either forgot about that or compartmentalize that "Justin is not his father" (except when attacking the name is convenient), and flushed the Brazeau match down the memory hole too. Make Amnesia Great Again.

Only an idiot like Doug Dotard, and the insecure mouthbreathers of his Make Ontario Great Again or Mooga-Ooga base, would confuse diplomacy, reasoned negotiations and respect for the rule of law with "weakness." Jon Snow knows nothing? More like Doug wouldn't know the Notwithstanding Clause from the Santa Clause. From what I gather it's similar but not exactly the same (and without the loaded dog-whistle) as "state's rights" in the U.S., where you can't just invoke the 9th or 10th amendments either to run roughshod over civil liberties and human rights, and whine "I'm taking my marbles and going home." We fought a war about this. Hopefully Canada won't have to repeat the same thing.

But the fact that the Ford Monster Truck is having peaceful protesters and members of the opposition parties expelled by force shows that he's clearly demonstrating fascist tendencies and ought to face an investigation of his own. Who were those members of the Toronto PD who took a selfie with Faith Goldy? Why are they acting as Doug's personal brownshirts against everyday Ontarians? The fact that it's Harper pulling Doug's strings and letting him LARP both his own (Doug's) and Harper's tough-guy fantasies raises a red flag about that shadowy Bannonite network that's in league with thugs like Orbán of Hungary and who knows who else.

I don't trust Adolf Harper at all, and I still think the IDU ought to be opened to investigation. After all, the Charter was Pierre's crowning achievement. Fat Cat always wanted to rip it to shreds and line his litter box with the scraps, and he never got over losing to the prodigal son. Doug's not smart enough to try and exploit or abuse the Charter against Justin. No, this is the next of Scumbag Steve's nine lives where he wages a personal vendetta by proxy and from the sidelines against the House of Trudeau.

I can't be the only one who thinks this has similar echoes of the Enabling Act. The Conservatives' official motto: "Because It's 1933."

"Where are the adults in the Ontario PC Party?" Crossed the floor or retired to Florida, it looks like. Either way they've fled the coop, or should I say the cuckoo's nest. I wonder how awkward holiday dinners at both the Ford and Mulroney households must be. Apparently, Mikey is nothing like either of his dumbass uncles. Wonder if he'll end up out of a job for daring to speak favorably about the enemy Trudeau.

Then you've got Caroline, who seems to have come down with a serious case of Buckabeer-induced spinal atrophy on top of preexisting hyper-ambition syndrome. "Paul Ryan disease." The Ford monster truck factory of today's PCs ain't her daddy's Oldsmobile, that's for sure. Broadway Ben must be glad he stayed the hell away from the family business and went Hollywood instead.

Trust me this will not get better. You haven't seen anything yet. Wait until they start in on the health and education system.

One does have to was why the Toronto City Council. Ford keeps saying it is to save money, but the people of Toronto pay for it, not the province. The only reason Ford and his ilk are attacking the Toronto City Council is they have far greater plans and they want to ensure the Toronto City council won't be a serious problem for them. it is also a threat to all city councils in the province: confront us and we will eliminate you. If you thing it can't happen, just watch, especially after the give away (sell at amazingly low prices to "friends" of the Cons.)of provincial Crown land starts. Local city/town councils will object because much of it will be land people considered environmentally sensitive or parks, but we know from Gordon Campbell's time in B.C., that didn't stop him.

Watch for changes to B. of D. to University and collegues. they'll be more friendly to the Cons and donors to the party. In B.C. once all those B. of D. implemented by el gordo, one of our bloggers, Norm Farrell compiled a list of their names, how much they received from the positions on B. of D. and how much they gave to the B.C. Lieberal/Con party. the amounts were so close you'd think it was a way of having tax payers pay for donations to the B.C. Lieberals/Cons.

if there is a strong group within the Cons which oppose abortions watch for changes to hospital b. of d. if they appointed by the provincial government. Doctors ought to be careful, they will become very friendly with the directors of the Medical Association and the specialist will make a deal for better salaries leaving the G.Ps. make a wage less than dog groomer. Say, that isn't possible? Well in B.C. G.Ps. are paid $25 per visit with a patient. More if its more complicated but that is what they're paid. My dog groomer makes more.

Get used to it or move or start working on a few Cons who might want to replace Ford.

Ford thinks he can stack Toronto Council with reformatories because he won seats there.What he forgets was demonstrated by the 25 Liberals who represent Toronto today: the same Toronto voter rejected the cons three years ago.

Douggie's excellent plan may be just as good as the rest of the Ford political legacy.

The end game is re-drawing boundary districts so the PCs can gerrymander their way to power in future elections.

UU, I really wish people would stop bringing up the "majority didn't vote for Ford" line. Because we live in a democracy that people take for granted and thus choose not to participate in, we have majority governments created by a quarter of the population. This happens at all levels of government. Trudeau was elected at about 39% which works out to only about 26% of the population, Harper had similar numbers. It is our fault, as citizens, for this. A true democracy can only happen when the people take part. Ford came to power through circumstance; an old tired 15 yr old Liberal gov't that needed to go, an NDP most still don't trust because of the Rae gov't and no other real alternatives. He won by default.