The Strange Defection of Leona Alleslev 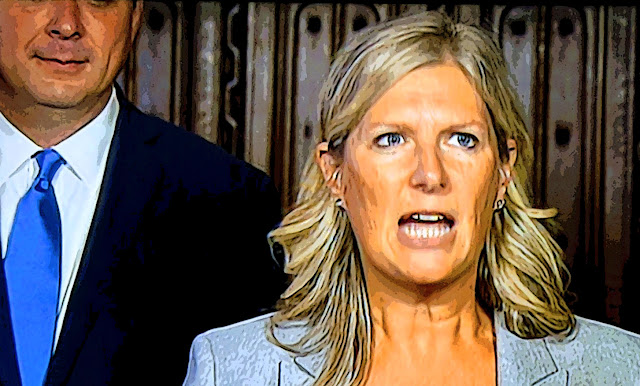 Until I saw her angry face on TV, with Andrew Scheer smirking in the background, I must admit I had never heard of Leona Alleslev.

So I was surprised to learn she was a Liberal MP who had just defected to the Conservatives.

Ontario MP Leona Alleslev is crossing the floor from the Liberals to join the Conservative party caucus — the first such loss for the governing party since the last election.

And the more I learned about her the more surprised I became. 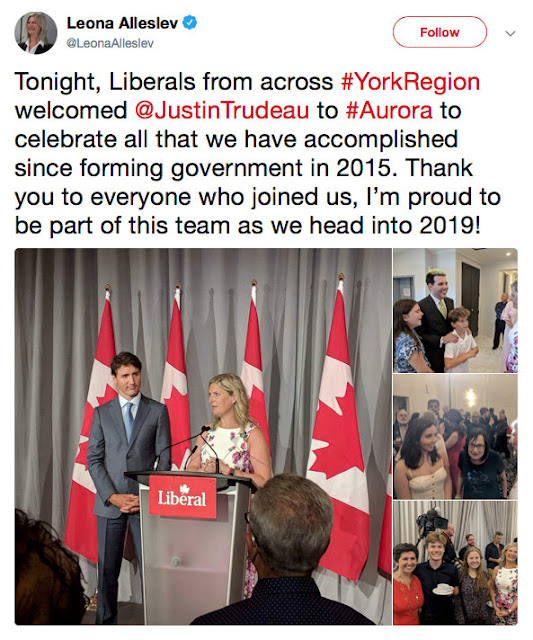 For there she was barely two months ago, welcoming the Prime Minister to her riding and claiming she was proud to be on his team.

And her explanation for that happy scene struck me as somewhat dubious.

In a subsequent interview with CBC's Power & Politics, Alleslev tried to downplay her tweet praising the Liberal government, saying she was simply welcoming Trudeau to her riding — as she would any prime minister. By "proud to be part of the team," she said, she merely meant to say she was proud to "be part of the country."

"My attempts to raise my concerns with this government were met with silence," Alleslev said in a speech in the House of Commons announcing her move. "It's my duty to stand and be counted. Our country is at risk. The government must be challenged openly and publicly.

"To my Liberal colleagues, thank you. But my oath is to country, not party and my sacred obligation is to serve my constituents."

When she is the one who betrayed her "sacred obligation" to the people who voted for her.

So what really happened?

Some pundits claim it's because her riding is usually a Con riding, and since Doug Ford did very well there, she could see the writing on the wall.

Which I think is a mistake, because the way Ford is behaving I believe will make many people in that riding vote for anyone but the Cons... 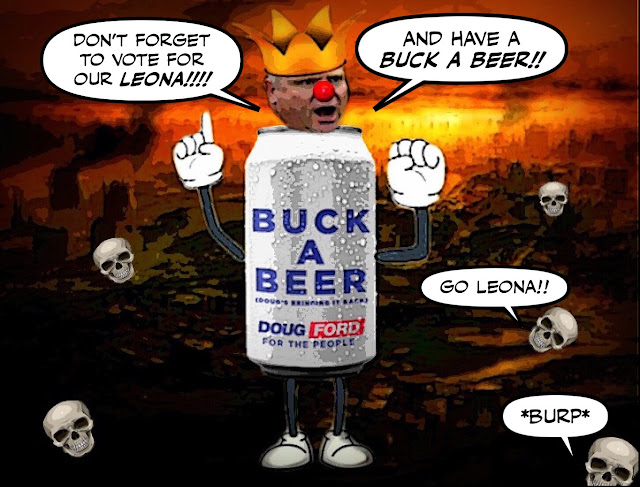 So I have to believe that this is the real reason Alleslev defected.

Alleslev previously served as a parliamentary secretary to the minister of Public Services and Procurement between November 2015 and January 2017. She was replaced by Quebec MP Steven MacKinnon, a former national director of the Liberal Party.

She was dumped as a parliamentary secretary, and she's bitter.

And if that is the reason Alleslev betrayed all those who voted Liberal in her riding, it couldn't be more selfish and pathetic.

And what makes it even more pathetic is that as a woman she is defecting to a party with a religious fanatic as a leader, and a sordid record of misogyny... 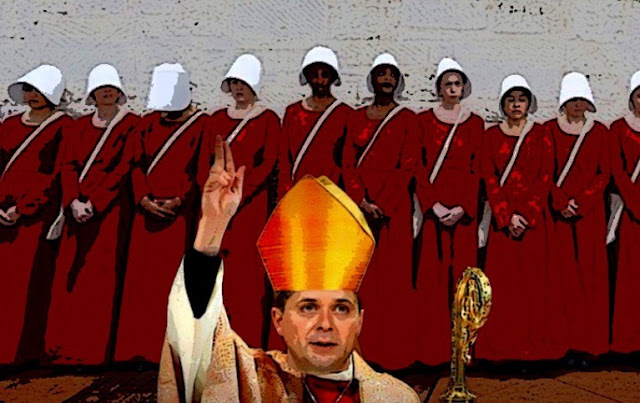 A party of reactionary old white men, where female MPs are treated as second class citizens, and women's rights are seen as something to hee haw over.

If Alleslev is too dumb to realize that now, she soon will... 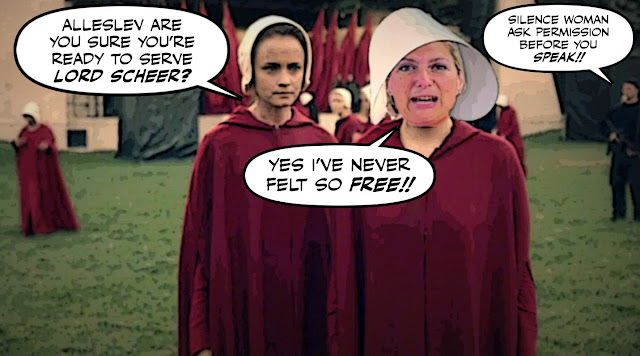 For betraying her constituents and the women of this country, she will deserve the full measure of the contempt she is sure to receive.

And when the election arrives, she will go down to Con hell with the rest of them...

Maybe Hamish dug up some dirt on her and Andy made her an offer she couldn't refuse. He's got to be desperate to find recruits for his Stepford brigade, what with an untold number of disaffected Cons ready to ride sidecar with Mad Max's "People's Power Wheels" tricycle gang. Or, Occam's razor (scooter?) being what it is, maybe she really is just as petty, self-serving and dumb as any other Con, or in this case she-wolf in Scheered sheep's clothing.

Get ready for the Cons to make hay of some idiotic caricature that Trudeau is a "fake feminist" because the person who filled her job subsequently was a man. But obviously, nobody who sides with the GOP or its offshoot north of the border puts country before party. It's all about $$$, personal career before public service, and a Trumpian perversion of JFK's famous call to civic engagement: "ask what this country can do for ME."

See, for instance, Susan Collins and Lisa Murkowski's milquetoast responses to the whether or not they'll vote in favor of the frat-boy pervert seeking a spot on the Supreme Court. Yet another textbook example of the "I got mine" mindset that's come to be expected from the leopards-eating-faces party of Slugs for Salt.

I could be wrong but Brenda Stornach came and went from Aurora. Mike Harris has pee markings all around town. Its very close to wood bridge and con clown turned pot dealer also was elected there. Circus meet Scheer, he embraces the hurt.

Step right up. It's oaths and sacred obligations time! You too can be "part of the country" in 2019! What country is that, you say? Why it's This Country!

Must be pretty big mirror. At least she won't have to change her hair colour.

Hi Jackie...Thanks for that slugs cartoon I thought it was hilarious, and a great metaphor for what the Cons are doing to themselves. As I tried to suggest in my post there is something sleazy about that defection. Did she go after Scheer, or did he go after her? For if he did I believe that’s illegal. I also wondered why she would defect only days after attending a NATO meeting in Paris. Did something happen in Paris that we should know about? As for Susan Collins, I must admit I’m disappointed by her reaction to the nomination of that frat boy judge. But my cousins have been helping to drop off coat hangers at her office, and I believe she now has more than a thousand....😎

Hi Steve...do you mind making your comments a little clearer. I’m usually exhausted by the time I get around to answering any comments, and some of yours are giving me a headache...🤕

Hi John...I have absolutely no respect for that shabby defector. She couldn’t explain why she suddenly decided to join the Cons. And it’s clear that despite all the hot air she expelled, the real reason she betrayed her constituents was to feather he own nest. Which is simply disgraceful and hopefully will cost the Cons a few votes in that riding...

Yet if a Con crossed the floor you'd gush about how noble and honorable they are for seeing the light. You are such a partisan hack.

She looks like a Con woman, angry, ugly, and not very bright.

While I am nitpicking I believe her oath is to the Queen. Poetic licence would allow the oath to be to the country, since that is the intention, but I wish she would be accurate rather than grandstand

Warren, is that you!?

So, Mr Scheer managed to coax a Liberal backbencher to the dark side. That is small consolation for the loss of Mr. Bernier.

Ms. Alleslev will probably not impact the final outcome of the next election very much.

On the other hand Mr. Bernier could impact the Conservatives' chances of winning that election.

If I am a Conservative supporter I am not that impressed with Mr Scheer's "coup".