The Day the World Laughed at Donald Trump 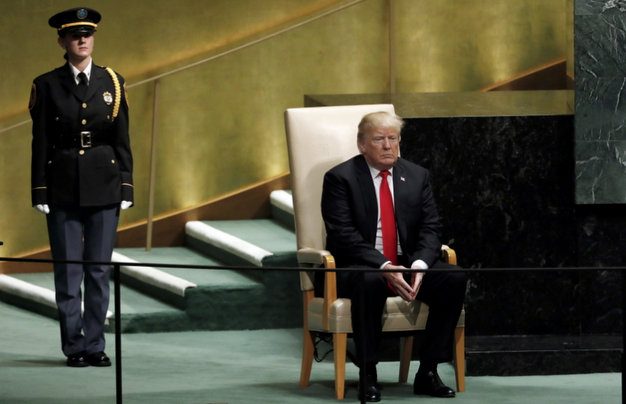 It is said to be Donald Trump's greatest fear. The fear of being ridiculed or laughed at in public.

So as you can see from the photo, as he waited to address the United Nations yesterday, he looked suitably solemn. And maybe even a little worried.

Would world leaders recognize his greatness and surrender without a fight?

Or would he have to threaten them like he's been threatening Canada?

And sure enough he did end up threatening them in more or less the same way.

You know, America's back, from now on it's America First, so get a number, get in line, do what we tell you, and behave yourselves, or ELSE!!!

Many of the assembled delegates laughed at him...

And although as you could see, Trump tried to laugh it off.

And later even claimed it was supposed to be a joke.

You know that dismissive laughter must have hit his massive ego like a cruise missile.

“He has always been obsessed that people are laughing at the president. From the mid-’80s, he’s said: ‘The world is laughing at us. They think we’re fools,’ ” said Thomas Wright, a Europe analyst at the Brookings Institution. “It’s never been true, but he’s said it about every president. It’s the first time I’m aware of that people actually laughed at a president. I think it is going to drive him absolutely crazy. It will play to every insecurity he has.”

Or how he must feel about this four-year-old tweet that he fired off in the general direction of Barack Obama?

The one with those lofty goals he himself has never even come close to achieving.

And if he is damaged goods could this be a way to bring him down?


Feel like the UN audience is on to something by laughing at Trump - he was clearly embarassed. Maybe we should all just laugh every time he speaks? Reporters, audience members, everyone. Start a cackling wave & shame him into resignation. Thoughts?
— Rogue WH Snr Advisor (@RogueSNRadvisor) September 25, 2018

But one thing is for sure, if Trump thought he could fool the world into thinking he was a great leader, he can forget about that now. 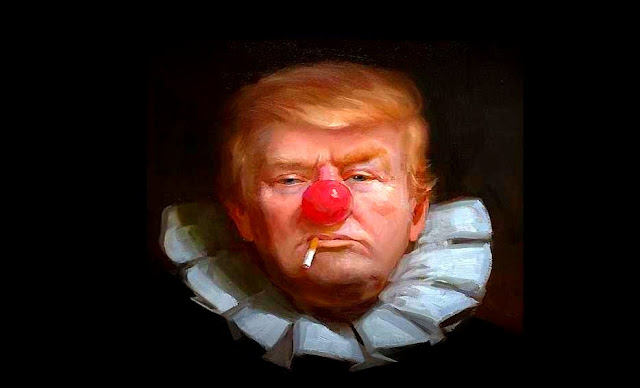 His story has gone from tragedy to farce.

And his days are surely numbered....

He'll probably retaliate in one way or another, and of course he'll have help from like-minded thugs in his corner like Bibi and of course Putin. After all, the catalyst for his presidential run was the deserved roasting he got at the 2012 White House Press Gallery dinner, where Obama delivered a knockout standup routine about Trump's buffoonery and the idiotic, racist birther conspiracy that he was promoting all over the media. Trump has spent his whole life wanting to be accepted by the "beautiful people" but instead, all those glitzy movie stars and prestigious news reporters were laughing at him. He's the male equivalent of Stephen King's Carrie, except Carrie was actually an unfortunate bullying victim whereas Trump is a bully himself who can't take what he dishes out.

He can't tolerate it either when other people get praise that he feels he deserves, and he alone above all else. Basically he was the opening act for Emmanuel Macron, who refuted every single word of Trump's incoherent, slurred ramble in a passionate 45-minute speech that got a standing ovation. Trudeau had given a speech earlier to a meeting of the Mandela Peace Summit, which probably gets under Trump's skin what with being a racist and hating Trudeau for his own reasons. But at least for now, he's probably not focused on Trudeau as much as he's got to be seething about Macron upstaging him just by being the adult in the room.

The only comfort he takes is that he's playing to "the base," the sadistic, outlier Republicons who hate everything the U.N. stands for and have no fondness for "sissy-boy" compassionate idealists like Macron and Trudeau who want to build a better world by bringing people together, rather than bringing them under the boot of greedy power-brokers and perverted rich (white) men. After all, what was the first topic on the agenda? Improving conditions for women and girls -- as Trump, a known pervert and wife-beater himself, shoots his mouth off defending an accused rapist he wants on the Supreme Court, and calling his accusers "nutty and slutty"! Even with Obama... it was a black man who got to the highest office in the land by his own merits who made Trump look like a fool. So in a general sense, the fact that anyone at that conference wants to aid the "inferiors" to better their lot in life is Trump and his cabal's biggest humiliation of all.

I thought it was the opening skit from Saturday Night Live.

The good news is America has been exposed by a buffoon not a sharp operator. Can you imagine Ted Cruz or even John McCain as president, much much worse. Trump is like garbage in the street, it will pile up before a flood washes it away.

Our media thinks it’s a real black mark against Trudeau that he’s not meeting with Trump at the UN.
Maybe they should take the anti blinders off for a change and see as a mark of honour. They think our PM should grovel toward the guy.
Trump, Scheer, Ford. What a team to get behind Queensway guys.

Watch Trump's speech and as he made his claims to greatness and knew what was coming next and it did, laughter. Most Europeans know that Trump is a joke and do many in other parts of the world. he isn't credible.

His speech goes on to say he isn't in favour of globalization, but rather his country first. Well if he isn't in favour of globalization he really, really needs to understand other countries put their country first. Not the U.S.A. first and then their own country. Trump can't have it both ways and therefore because its America first, Canada simply can not sign a trade deal with the U.S.A. HE WON'T honour it and it will only be signed by the americans if Canada is at the loosing end.

No deal is better than a bad deal. The Canadian dairy industry first, America second.

Why is dairy, you know like food, not a national security matter if steel is. If we can't feed ourselves then we are not a free country

Hi Jackie... I agree with you, this is so true:

After all, the catalyst for his presidential run was the deserved roasting he got at the 2012 White House Press Gallery dinner, where Obama delivered a knockout standup routine about Trump's buffoonery and the idiotic, racist birther conspiracy that he was promoting all over the media. Trump has spent his whole life wanting to be accepted by the "beautiful people" but instead, all those glitzy movie stars and prestigious news reporters were laughing at him. He's the male equivalent of Stephen King's Carrie, except Carrie was actually an unfortunate bullying victim whereas Trump is a bully himself who can't take what he dishes out.

And Trump as Carrie is absolutely brilliant. As is your whole comment.

I wish Obama hadn't humiliated Trump at that White House Press Gallery dinner, although at the time I remember practically falling out of my chair laughing.

But since Trump is now President, and we know he hates being humiliated, let's see if we can humiliate him again and again... 😎

Hi Steve...the problem is the buffoon has easy access to the nuclear codes that could destroy us all. But yes, the garbage is piling up, and sooner or later a flood of popular indignation will wash it away...

Hi J.W...I completely agree with you. Our media is acting like a bunch of surrender monkeys. There is absolutely no way we should be seen to grovel before somebody like Trump, not if we are to preserve our self respect. I am proud of the way Team Canada has stood its ground against that foul bully, and may that continue...

Hi e.a.f...yes, it says something about Trump when nobody was surprised that his absurd bragging should make people laugh in his face. That’s how low that buffoon has fallen. We Canadians are a very polite people, but we should not let others push us around...

Hi anon...That’s a good point. We have every right to defend our family farms, and the numbers show that when it comes to dairy products the U.S. has a surplus with us, so not only is Trump acting like a rabid dog, he is barking up the wrong tree...