Doug Ford and the Rise of the Resistance 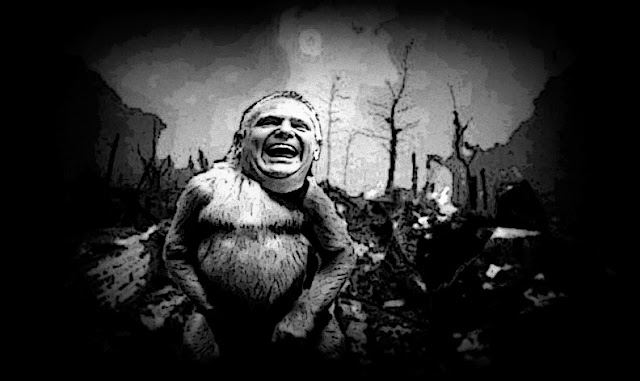 It's like a nightmare come true. And after only three months in power.

It's Saturday night. Parts of Ottawa are looking like a disaster zone after a tornado hit the region. Thousands are in the dark. 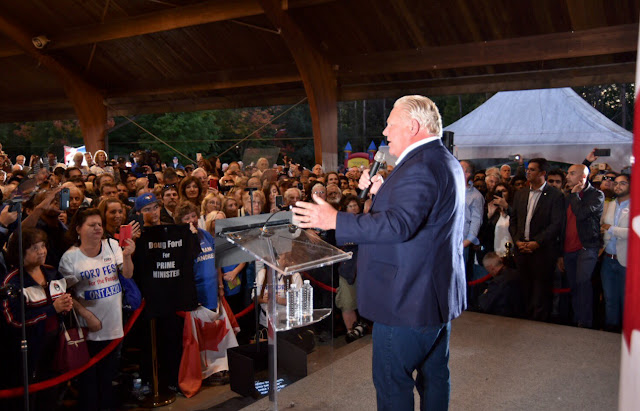 Whooping it up at the Ford Fest.

With the Ford Nation... 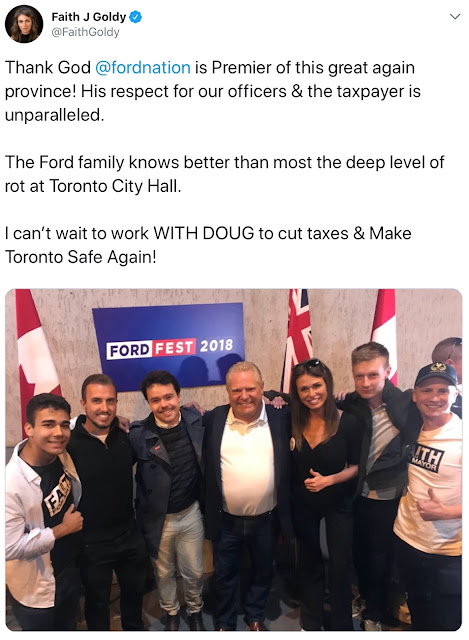 Even though he really has nothing to celebrate.

His approval rating has tanked to an incredible low of 24%. More than 50% disapprove of the job he's doing.

Thanks to him the federal Liberals are surging in Ontario... 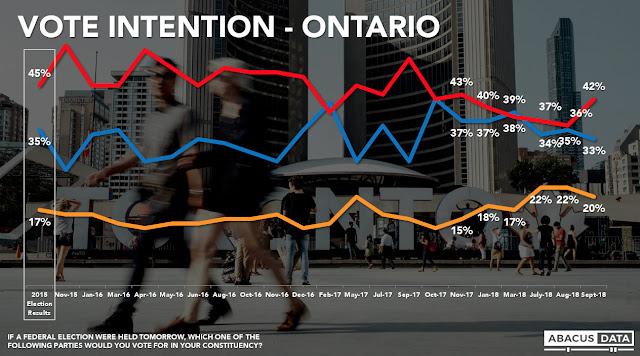 His plan to make destroying the province's version of a carbon tax his number ONE priority, is now looking more like the plan of an idiot or a maniac. 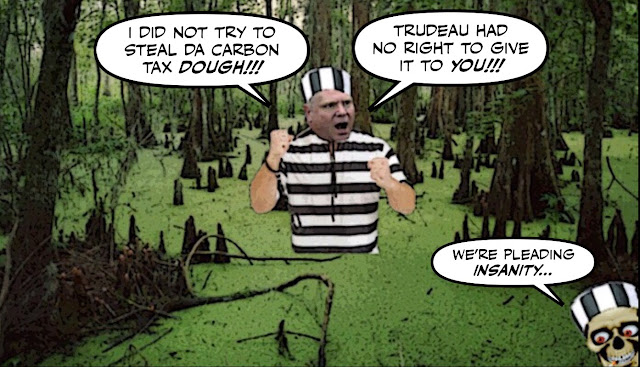 And now Boss Ford is trying to make us believe that he's JUST discovered that the province's deficit is double what he thought it was, or had been led to believe by Kathleen "Lock Her Up" Wynne.

And sadly, like so many other Cons before him, has been found to be lying like a thief.

Whether you believe the former Liberal government was using accounting smoke and mirrors to make its books look better or that it had a legitimate argument for its accounting treatments is neither here nor there. The fact is the new government hasn’t uncovered a meaningfully larger deficit than it had known about the day the budget was tabled. This wasn’t an announcement, it was a performance.

Just so he can break all his promises, and take a chainsaw to government, or social services, or medicare. Or all the above.

Or any group, or anyone, who dares to try to stop him from becoming the rube dictator of Ontario... 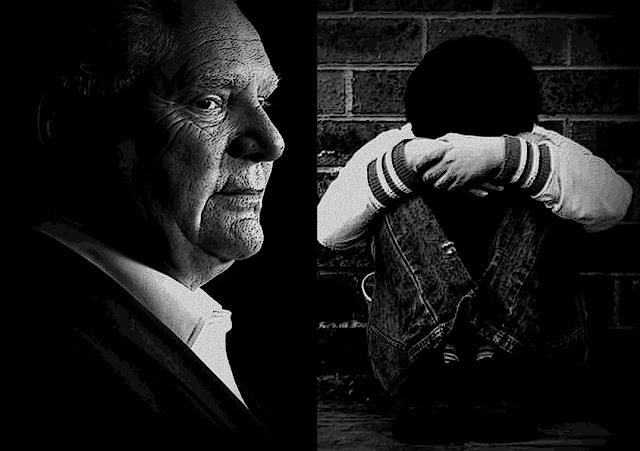 Boss Ford, the brutish demagogue drunk with power who would defecate on the Charter of Rights.

The cowardly beast who would erase the existence of LGBT children from the sex-ed curriculum, even if he kills them.

Just to pleasure his rabid religious base. 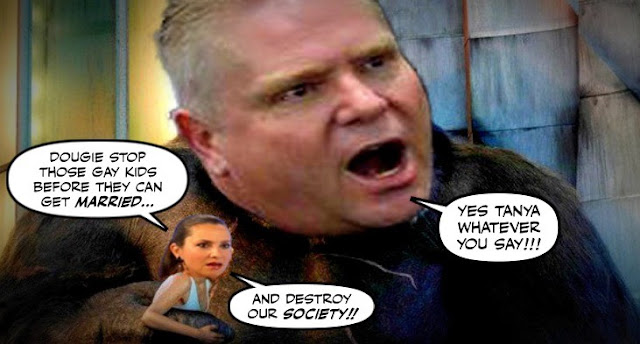 Whose fanatical followers anointed him leader of the Ontario PC party, and to whom he owes EVERYTHING.

About forty-thousand high school students hit the streets the other day to let Doug Ford know where he can shove his bigotry.

With megaphone in hand, Thea Baines, 17, led a raucous crowd of students, who walked out of class Friday, in a chant for change, calling on Ontario Premier Doug Ford to reinstate a modernized sex-ed curriculum and improve Indigenous education.

Baines told the Star it’s important high school students speak out because the curriculum change “affects our little sisters and little brothers and our cousins.”

“It will affect the next generation of adults and we want everyone to grow up learning about their bodies, consent, mental health and LGBTQ rights.

It was an amazing sight...

And an inspiring one...

And since many of those students will be old enough to vote in the next provincial election, and will be part of the biggest voting bloc in the province, the damage they could inflict on the Cons could be devastating.

The writing is on the wall. Already.

The resistance is rising. Already.

The future belongs to us.

And probably sooner rather than later, this Con beast will be defeated and deflated... 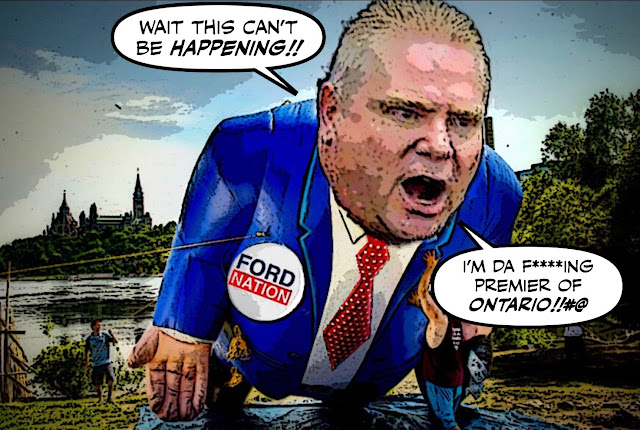 A billion a month being spent on the interest Ontario owes. How sad that the money lenders have enslaved us.

Someone ought to crowdfund another orange baby balloon to fly over Toronto, and have the kids taunt Diaper Doug with a nursery jingle.

♪ Buck-a-Beer Baby! On the rampage!
When the zoo opens, you spring from your cage!
When the budget breaks, your régime will fall!
And down will go Dougie! Bigots and all! ♪

Or perhaps an orange dinosaur, call it Fordzilla or Torontosaurus Rekt. Or an orange gorilla, Dougie Kong. (Perfect pairing with his Nintendo Narcissist counterpart from the USA, Toad the Choad.) It won't be the Snoopy blimp from MetLife, that's for sure. Or anything endearing from the Macy's Day Parade. The (Dis)Honourable Premier von Hindenburg: Powered by hot air, steaming hatred, the flatulent stench of failure, and the flat, fizzled suds of Buck-a-Beer. Oh, the huge manatee!

At least the kids are all right. Reminds me of how at the end of Matilda, all the schoolchildren chased the wicked Trunchbull away. Off to the Chokey with you, Doug!

I am still stunned by Doug Ford’s low approval rating only three months after the election. It must be a new world record, and it makes me wonder what all the losers who voted for Ford were thinking? Did they really think he’d make a good dog catcher let alone a Premier? It has to be one of the most idiotic choices voters in Canada have ever made.

Ontario voters are starting to figure that out. To be fair Doug Ford ran as a bland blank slate instead of like Doug Ford so people could lie to themselves when they voted for him. That will no longer be possible.

I haven't loathed a Premier this much in a long,long, time.

But his low, low approval rating makes me feel better as its fairly certain barring a dark miracle that Doug Ford gets only 1 term.I would love to see full Ontario opinion poll, taste the buyers remorse already.

And? You realise those interest payments fund your pension, right?

Is it true that Doug, like The Donald, had tried pot but never exhaled?

Dougie may find he is about to get "eliminated" by his own party. If enough of the MLAs figure they could be ousted in the next provincial election, they may turn on Dougie and get rid of him. It happened in B.C. to his advisor, Gordon Campbell. The caucus found out he had lied, they wrote a letter to him, 12 brave souls signed it, and off he went to London compliments of Harper.

As you point out, those kids will be voting next election and between now and then they will be active within their communities. Some may take up political actions outside individual MLA's offices on a weekly basis. Even the religious base will find they have kids who are of the LBGTQ community and there will be more than one Mom who secretly will be very happy her child may grow up happy.

Now as to will Ford change his mind, na, he is too dumb. In my opinion, the provincial Conservatives think they have a handle on him and can control him, during the upcoming 4 years. Is Ford personally so opposed to the LBGTQ community? Don't know. If his source of funding is from those opposed to sex ed. for kids regarding sexual preferances, etc. then no matter how much people protest, it will stay as is, because money is more important than people.

Having seen what protesting did in B.C., nothing will change.
At time you couldn't find many who actually voted for the former government.

As to the Conservative response, not so much. In Quebec, in the middle of an election they all stopped campaigning and got out to see the damage and provide a united front. What that did was actually to all their benefits because voters saw, regardless of who they voted for, they cared about what had happened. Out here in B.C. it was only Quebec leaders that we saw on the new and the Mayor of Ottawa. As things more forward, expect more to be done in Quebec for those impacted than in Ontario. That was another thing we took note of in B.C. Those B.C.Lieberal (cons) weren't so good at the people in need thing. It was community groups who did all the work.

In my view, the kids are always alright. This is great training for them. The experience of engaging in political activism will make them more receptive later when the libertarians call out to them after it's been determined that pandering to the theocons and other bigots has served its historical political purpose again and might become counter productive for a time. The most committed former flower children often make the best situational rugged individualists. Welcome to the eighties. Of course, that time might run out on Doug. But he's Doug Ford and that's all he is, and FordNation is no different than any other assembled cluster of flat foreheads.

Nothing beats getting them into a knot over something cheap and simple that shouldn't have been the subject of an argument in the first place. Let's see what they do with this before the personal adaptation phase commences. Hopefully, as before, they won't learn any more than we want them to. We just have to make sure the theocons keep turning out just enough morons to enable us to repeat the process when the kids of today's resisters are twenty-somethings.

Hi UU
Dougie and Allen scammed the ranked ballot electoral system by ensuring all of her evangelical votes went to Dougie as the second choice when she was eliminated. As a result the religious right partially owns him, much the same as they own Scheer as well as the Dotard in the US. Thankfully they are a smaller group in Canada so their long term influence is more tenuous as Mad Max is currently demonstrating. Our forefathers had the wisdom to separate church and state lets keep it that way.
RT

Hi Jackie...that’s a brilliant idea. If ever there was a Canadian politician who deserves a blimp, it’s got to be the Fordzilla. As you can see from that last graphic I made, it would be suitably terrifying. When I was in Scotland I got to see baby Trump floating over a park in Edinburgh, and it was hilarious. Although I must admit I did wish I had my old Daisy pellet gun with me...😉

Hi anon@3:40 PM...It is a stunning decline, and it tells me that many people must have voted for Ford without giving it much thought. They wanted change and thanks to the media propaganda didn’t trust the NDP. It was as you say, one of the most idiotic choices ever,...

Hi Gyor....I don’t think I have ever loathed a Premier that much either. And I will never understand how a millionaire could ever fool people into thinking he was a man of the people. I saw what happened in the U.S. but I never thought it could happen here. I was also extremely disappointed that progressives couldn’t unite to support the NDP even though it was the only party that could have stopped the fascist beast. The damage Ford could do to Ontario is tragic, and all those who voted for him must be held accountable...

Hi UU...I think the OPC will regret choosing Ford as their leader until the end of time. He may wreck the province, but he will take them down with it. We live in incredibly challenging times, and having a climate change denying bully in charge of Canada’s most powerful province is absolute madness...

Hi Frank...As I understand it Ford was never interested in small stuff. According to a famous Globe story he would sit in his parked car and sell hash by the pound. And remember he was the son of a millionaire so he didn’t need the extra money. I fear that greed will do this province great harm, but on the positive side will probably end up taking him down as well....

Max is a crazed libertarian, not religious right.