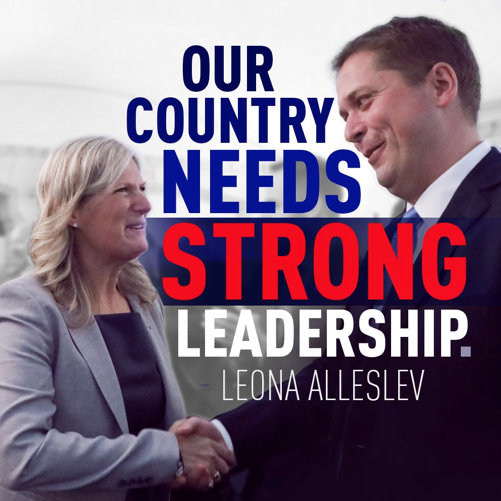 For almost two days, Leona Alleslev and Andrew Scheer were the toast of Con Canada. And what a show it was.

I mean just LOOK at them. Have you ever seen two politicians fall in love so quickly? And still manage to look and sound so ridiculous

The Liberal defector made it sound like she had escaped from a prison camp in North Korea, where her opinions had been ruthlessly stifled.

While the Con media heaped praise on the failing Scheer for managing to reel in a Liberal AND a woman. 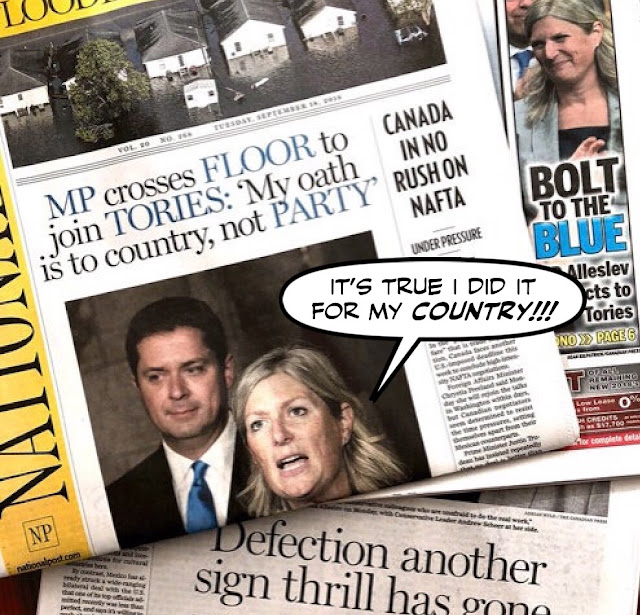 And in a feverish frenzy, wondered whether Alleslev's surprise defection marked the beginning of the end of Justin Trudeau?

Only to have the clock strike midnight.

And the glass coach turn into a pumpkin. 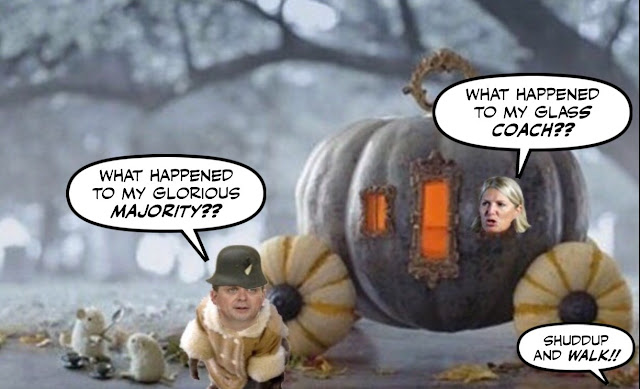 Leona Alleslev heaped public and private praise on Prime Minister Justin Trudeau and his senior ministers in the weeks before she started a secret process to defect to the opposition Conservatives, according to an email and an audio recording obtained by CBC News.

"The greatest thing about being a member of Parliament in this prime minister's government is that we are each and every one of us valued for the contribution that we bring to the team," Alleslev said, according to a recording of her remarks.

When it was revealed that Alleslev had praised Trudeau extravagantly.

"So I would like to thank this prime minister for creating the country that I am honoured to serve and defend, not only for what he is doing here at home, but for how he is representing us around the world."

Only to suddenly defect and dump on him and his government, only a few weeks later.

"I stand here today deeply concerned for the future of our country," she said on Monday. "On the world stage, Canada has yet to rise to the occasion. The world has changed and Canada must change with it.

And be revealed as a shameless opportunist... 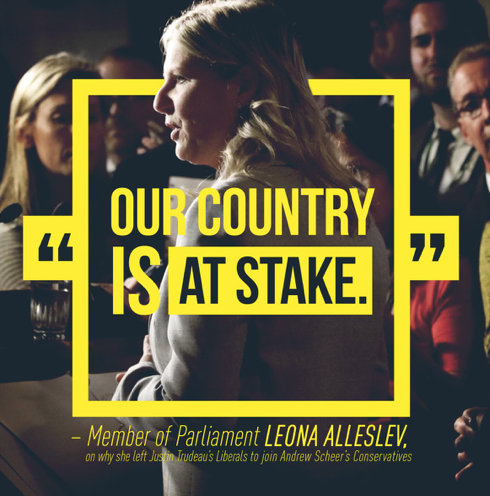 Some say that since the riding has been a Con riding she figures she might stand a better job of winning it if she runs for the Harper Party in the next election.

Other suggest she was always a Con but didn't know it. Duh.

But I think this is the real story:

She was demoted by Trudeau, she was bitter, the Cons offered her something, and she went for it like a trout goes after a fly.

Leaving Scheer looking like a fool or a carnival barker... 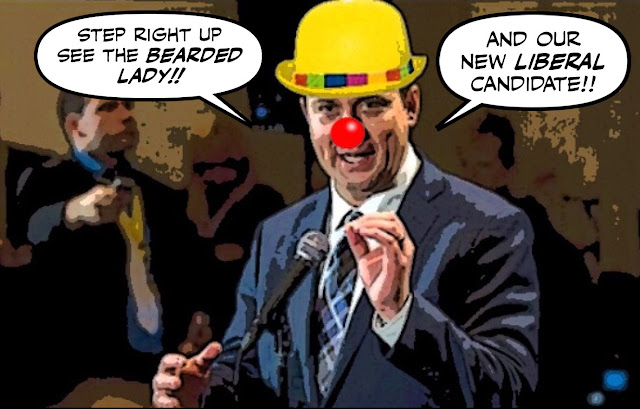 And a NOT very strong leader.

Golly, I wonder how long Alleslev, the defector who came in from the not so cold, will keep her seat right behind the failing Scheer... 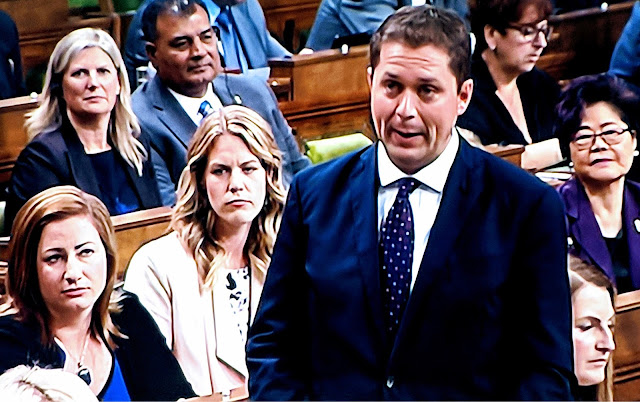 But judging from the looks on all of their faces, my guess is not very long.

She sold her soul to the Cons, and is probably sorry already,

But there is no going back for a person like her.

And when the Cons go down, as they will, she'll go down with them...

Speaking of defectors and defectives, not to hijack the thread but what the hell is Doug doing heading to D.C. to negotiate NAFTA on his own? First Mr. Harper goes to Washington, now Mr. Ford drives his tractor there onto the White House lawn? "Green Acres is the place for me!"

Is he going to invoke the notwithstanding clause if Trudeau and Freeland walk away because they know the dotard's goon squad isn't negotiating in good faith? "Notwithstanding the notwithstanding, I cannot withstand Justin and 'Christina' not withstanding Ford Da People!" He reminds me of a toddler who just learned a new word and uses it as often as he can, although with toddlers it's usually bathroom words or curse words just to see if they can get a rise out of the grown-ups. Then again, to Doug, Ontario's resident Scrabble champion, "democracy" is a four-letter word.

Donald, meanwhile, is so equally stupid he probably thinks Doug is the CEO of a certain "Canadian car company" that's looking to come home to Detroit. I'd love to see your take on National Lampoon's Ford Excursion, Simon. When it comes to obese orange dictators wrecking up the White House, none really is too many -- but a twin attack of Tweedle Dougie and Tweedle Donnie is just two much!

Doug doing heading to D.C
Grandstanding, wasting provincial travel money and the time of embassy staff in Washington? At last report he is not even talking to any Americans.

Some of the base may not realize just how ridiculous the fool's trip is.

she walked across the aisle, in my opinion, as a career move. With the recent changes to the Cabinet, she did not improve her lot in life. She crossed the aisle and immediately was given a post as opposition critic for whatever. When she ran for the Liberals, they were most likely the party which wanted her, so its all about rewarding oneself.

Ford is like Trump in that he wants to "enrich" himself in his position. that isn't always money but perks and travelling first class to Washington, D.C. meeting with Freeland, Ambassador, etc. He'd never get that if he weren't the Premier of Ontario. Wait until he goes to Europe or warmer climates in the winter.

The federal government can do little to stop him, so they do have him saying the same thing as the federal government regarding steel, aluminum and agriculture. It will be helpful in that the Repukes know what his public position is. If he sticks to it, it will work. If he is there to make behind door deals which benefit him and his, some one will find out and dougie may be gone sooner than later. His caucus is there for 4 years/5 max. If the caucus starts to think Dougie will result in them being turfed from their jobs, for sure, then they will turf Dougie first. Politicians being politicians will do what is best for them, in the majority of cases, regardless of Party.

Hi Jackie...I was going to write something about the Fordzilla’s trip to Washington, but I couldn’t find anything to write about. It seems that it is just an attempt to look like a Premier, and like you I’m surprised he left his tractor behind. On the other hand, there could be a more sinister motive. Since we know the Harperites running his government are trying to use Ford to make Trudeau look weak, they may just be setting him up to fight the Liberals on the supply management issue. If the government makes even the slightest concession on that front, expect to see Ford lumbering across the fields posing as the farmer’s champion....

Hi jrkrideau...yes, I agree with you. It probably is mostly grandstanding. He has been so focused on Toronto, his handlers probably want him to talk about something else for a change, and look more like a Premier than a rube mayor. And you’re right, it doesn’t take much to fool his dumb base....

Hi e.a.f....yes, i haven’t The slightest doubt that Alleslev is only thinking about herself. She may be concerned that the riding could turn Con again as it has almost always been, after the PC candidate won big in the recent provincial election. But I think her demotion last January was the real reason she defected....