Candice Bergen and the Summer of Failure 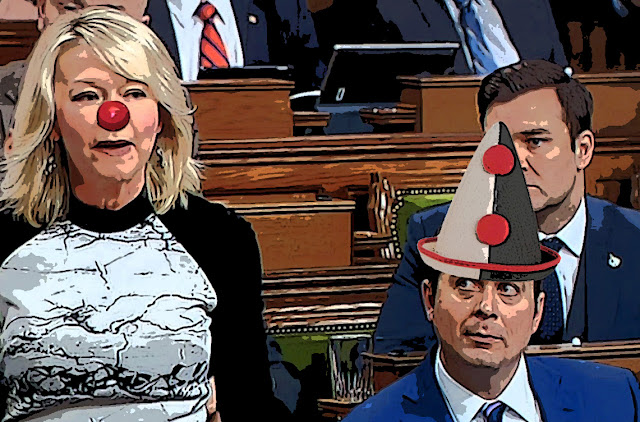 Candice Bergen, the Con house leader, is one of the loudest and most vile members of Andrew Scheer's Con Clown Circus.

Her hatred for Justin Trudeau is so great it's deeply disturbing, and can only make many Canadians question whether she's losing her marbles.

So when her creepy Con leader decreed that this now dying summer should be known as Trudeau's "Summer of Failure."

Nobody could control her or hold her back.


And it was yet another example of what the hate mongering Con cult, or Harper's Party, has done to Canada.

Debased our politics beyond recognition.

But then Bergen has always hated Trudeau with a passion that borders on the pathological.

The deranged tweets just pour out of every angry orifice.

And who can forget the time she went after Justin and Alexandre Trudeau for what they were wearing? 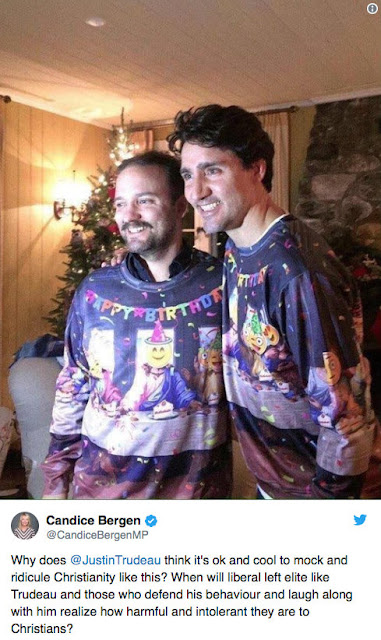 Or forget that when Bergen found out that the two brothers were just having fun with the fact that they were both born on Christmas Day, she didn't have enough class to apologize.

She just kept hating away. 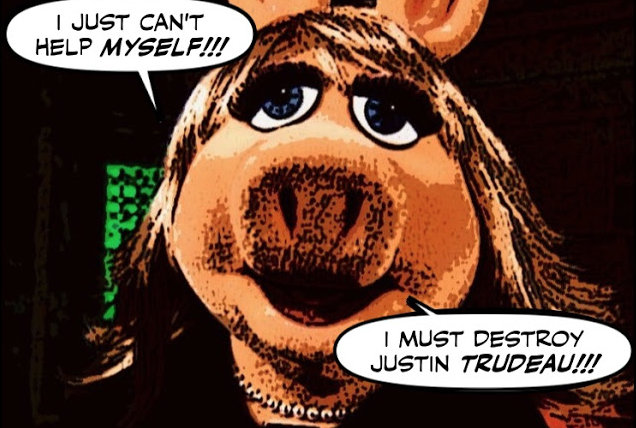 Like all those other Con hogs who have done so much to debase this country.

Many of those Cons probably won't be around after the next election.

Not with Trudeau heading for another crushing majority. 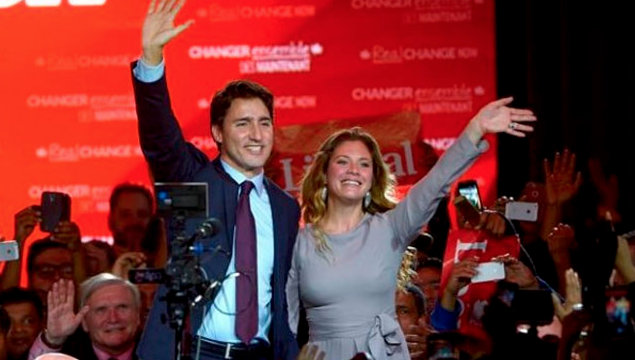 Which as a bonus might finally encourage the toxic Trudeau hater Bergen to resign, or at the very least follow Justin's example. 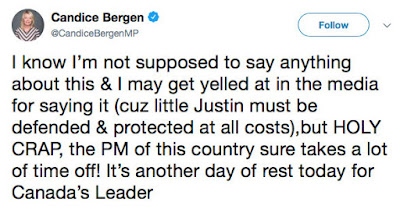 And take a few days months years off.

Or since she apparently sings... 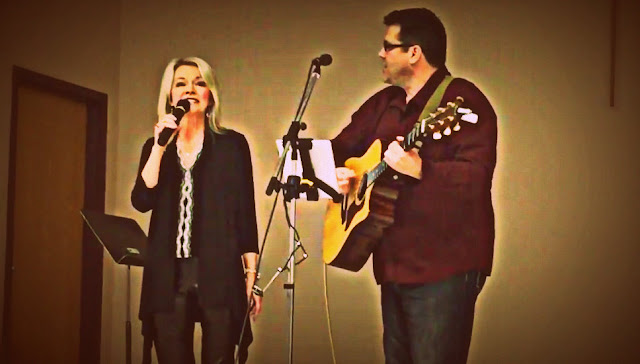 Maybe it could be start of a whole new career...

That ghastly Con just doesn't have enough talent, her whole political life has been one big summer of failure.

But I can see her flinging her body around at the very mention of Justin Trudeau.

So anything that can remove her from Parliament has got to be a good thing...

Replying to @brianlilley @cafreeland @realDonaldTrump
Typical far-right reporting from Lilley. Did Freeland create or have input into the video that was shown prior to the panel discussion? On the panel, did Freeland compare Trump to Assad or any other dictator?

She obviously is working hard to turn the narrative, but it is doubtful her approach will work. Most people don't see Christmas as a religious holiday anymore. We are multi cultural. She is speaking to her base, when she makes statements as you've outlined. She isn't speaking to those who might vote for her. The Pictures of the Trudeau Brothers will be seen by millions upon millions of Gen. X, Y, and Millen. as fun and a great way to celebrate Christmas, if your birthday is 25 Dec. She so needs to get over herself.

I didn't realize she was such a religious freak. I guess that explains why Andrew Scheer made her his House Leader. When will our biased media expose that theocratic conspiracy?

What the Mirror Universe fake-news version of Murphy Brown also fails to acknowledge is that Justin and Sacha's sweaters were made by a cult-favorite Canadian apparel company called Shelfies, best known for the viral "Moosin' Trudeau" design intentionally created to mock Putin's ostentatious displays of riding "bear-back" on a Russian grizzly. By modeling their humorous gift (the time-honored "ugly Christmas sweater"), the brothers drew attention, and no doubt traffic, to a local e-commerce business, thus bolstering the Canadian economy -- and during the busy holiday shopping season at that.

I thought the cons said they "beleive very feircley" in free-market principles. I know they love to accuse Trudeau of not being supportive of Canadian business owners. Kitschy as it might be, political-themed memorabilia has become a billion-dollar marketplace offering a lot more these days than just bumper stickers and pins. Like Barack Obama, Hillary Clinton, and even Donald Trump in the U.S., Trudeaumania 2.0 has spawned a cottage industry pouring oodles of loonies into the Canadian economy -- and helping out local creatives hawking everything from T-shirts to calendars to fan fiction books. In other words, his mug sells mugs! No doubt they're jealous, as nobody wants to see her, Andy or anyone else in the Scrooge party model a poop-emoji sweater, that's for sure. Fuddle duddle and bah humbug.

Another immature Con with no credible policies to run on, so she snipes like an angry mean-girl at the popular guy who won student council -- and has no qualms about attacking his younger brother either. Conspiracy-theorist commenters who frequent the Rebel and the deplorable Reddit boards where one of Scheer's other robomonkey PR hacks is running the northern version of "The Donald" fan forum, love to tag Sacha as a stealth jihadist and covert operative for the ayatollah for no other reason than he made a film about power struggles in the Middle East. Then, I forget if it was Icy Bergen, Batshit Batters or Linda Trumpin' Frump who went for the ultimate jugular and made fun of Justin for a supposed "vacation" 3,000 miles away from Ottawa, ostensibly to "get away from" Scheer... when actually, he was paying a solemn visit to the spot at Kokanee Lake where Michel died. And they have the damn nerve to accuse Freeland of conducting "bad-faith diplomacy on Twitter"?

Nothing is off the table for these lowlifes. Sacha wisely keeps a low profile (ironically, a documentary filmmaker who stays as far away from the camera as possible), while Michel, of course, is dead -- and tragically so, cut down in the prime of his life, by the fickle cruelty of nature. You'd think anyone with a shred of decency would have the good sense to leave them, and the rest of the Trudeau family, alone. But the Cons have no shred of decency, for all their yammering about being the "pro-family" party. Just like the GOP, which saw Rush Limbaugh vilifying a then 12-year-old Chelsea Clinton practically from the moment her father announced his candidacy for president, and Fox News, which unforgettably unleashed grotesque racism against everyone in the Obama family -- including their little girls. So much for family values and living up to the model of a polite Canadian, eh?

After all, who could forget Rempelthinskin in her cups growling to then-infant Hadrien that his father was going to hell? Or Lorrie Goldstein's summer of failure when last month he mocked Justin as a sissy soyboy for breaking down crying at Pierre's funeral? If Scheer had any integrity, he'd come right out and say he unequivocally condemns the bullying and harassment of the prime minister and his family, particularly his children. But not with Hamish and his troll farm running the campaign (into the ground, thankfully). Harassment and abuse pathetically masquerading as "free speech" are the only "policy statements" anyone in the Cons (or churning out sophomoric dreck for their propaganda rags) really has.

An intolerant Christian who is really really upset that her religion does not have a dominant role in decisions made by the federal government. Especially of the type made by her good old Christian buddy Vic. https://www.macleans.ca/politics/ottawa/pat-martin-versus-vic-toews-that-escalated-quickly/
RT

An intolerant Christian who is really really upset that her religion does not have a dominant role in decisions made by the federal government.

Hey, it's working well for the US Gov't.

Although the polls show the Liberals leading overall, I worry that the con media, which is a huge presence in this country, will be able to convince enough people that Trudeau and the Liberals are not up to the job and they either change their vote in 2019 or stay home giving us another Con gov't. They keep pounding on about the failure of the Liberals to fulfill promises, the India trip, inability to get anywhere in the NAFTA talks, anything that paints the Liberals as incapable. Trudeau needs a win, a big one at that, before the next election. I hope he gets it.

Hi anon....Brian Lilley worked for years withbEzra Levant, first at Sun TV News, and then at the hate mongering Rebel. So nothing he writes should be taken seriously. He is one of those Cons who is so obsessed with trying to destroy Justin Trudeau, he is willing to suck up to Trump and stab his own country in the back...

Hi e.a.f...I forgot to mention that the pictures she dug up of Justin and Alexandre were two years old. So it just shows you how determined she is to smear Trudeau and his family by whatever means necessary. I believe that she is growing more bitter by the day because if you remember she threw her hat into the ring for Con leader, only to withdraw long before the end of the race. The rednecks who elected her will keep sending her back to Ottawa, but she will only see her party shrink, and be able to do nothing to save them...

Hi Jackie....Cons are the only party in Canada who have made a habit of going after the families of their opponents. It’s absolutely disgusting and totally un-Canadian. But then they are more Republican than anything else, and Stephen Harper was the first leader to introduce Republican style attack ads into this country, so he set the tone for everything that has followed. Luckily Canadians seem to be tiring of the constant negativity, and the ugliness of the Cons, so by always trying to hurt others they are only hurting themselves. The lowlife Cons have no idea what decency means, and that will cost them everything...

Hi anon...yes a lot of people don’t realize that she is a religious fanatic who gets a high rating from organizations like Campaign Life. But as you point out, that is the reason Scheer made her House Leader. If our crappy Con media did it’s job properly they would discover that Scheer’s inner circle is made up of religious fanatics who if given half a chance would turn Canada into a theocracy, and are a mortal danger to this country...

Hi RT...who can forget Vicky Toews? I used to have such fun portraying him as a zombie stumbling out of a graveyard. But of course he was no joke. He was a vicious religious fanatic and bigot, and he used our tax dollars to build or renovate Christian institutions all over the place. Even though he cheated on his sick wife with a teenage girl friend and couldn’t have been more of a ghastly hypocrite. And the scary part is that Scheer’s party makes the old Harper Part look almost secular by comparison...

Hi jrkrideau...yes it is working well for Donald Trump. The evangelicals are his most fanatical supporters, and the ones still keeping him afloat. But luckily their blind loyalty only turns off more secular voters, and by associating with the morally corrupt Trump they are doing themselves lasting damage...

Hi Joe...Although I am optimistic about our chances in the next election, that doesn’t mean we should be complacent. As the election of Doug Ford proved, we live in crazy and dangerous times. But at this point at least the trend favours the Liberals, Maxime Bernier’s new party is threatening to do serious damage to the Cons, and their association with Doug Ford is also hurting them. Also the economy is booming and most Canadians support Trudeau and Freeland in the NAFTA negotiations with the monstrous Donald Trump. And lastly but not leastly, the millennial generation will be the biggest voting bloc in the next election, and they have no time for the Harperite bigots. So while we need to attack the Cons harder than we ever have before, I’m pretty confident that when the smoke clears we will emerge triumphant...