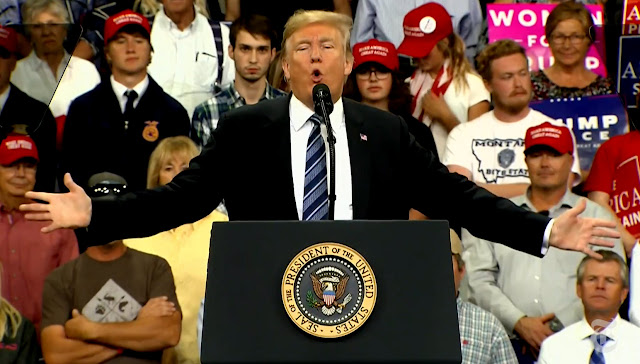 Well there he was the other day in Billings, Montana, bathing in the love of his grubby supporters.

Slurring his words, comparing himself to Abraham Lincoln, demanding the head of the person who wrote that anonymous op-ed piece in the New York Times.

Only to have a young man standing right behind him quietly make it clear he wasn't one of Trump's monkeys.

By using animated facial expressions to convey what he thought about the speech.

Before being asked to leave his place, and replaced by a more enthusiastic cult member. 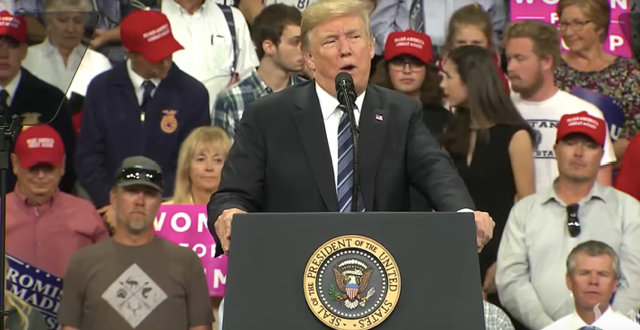 Only to to be dubbed the "plaid shirt guy" have his silent protest go viral.

And end up after what must have been a dizzying day being interviewed on CNN.

Here's to Tyler Linfesty, who managed to upstage Trump at his own rally.

One of the many young Americans who will eventually save America from the sewer it has become.

And my Resistance hero of the day...

The Andy Warhol 2.0 formula: In the Internet age, everyone will have their 15 megabytes of fame. At least Plaid Shirt Guy is... easier on the eyes than old bug-eyed Rudy. But when it comes to memeworthy facial contortions in the presence of Trumpian unintelligent life, nobody holds a candle to Buzz Aldrin.

Figures that the cosmonaut "pioneer" of SPACE FORCE would make the poor old rocketman want to go back to the moon and stay there. Mar-a-Lago ain't the kind of place to raise your kids. In fact, it's swampy as hell.

It’s a sign of the times when a person can be removed from a political rally and questioned by the secret service for not clapping or cheering loudly enough. And Mr Fake News is the biggest faker of them all.

Hi Steve...yes I wonder if the Trumplings are using facial recognition technology to spot people who aren’t cheering their leader enough. I remember a recent story where the Chinese police were able to pick a wanted person out of a massive crowd in a stadium. So you can imagine where that technology is heading...

Hi Jackie...thanks for that video Buzz Aldrin was clearly trying to warn us, too bad that warning wasn’t heeded. As for Tyler Linfesty, I guess his day of fame tells us how desperate we are for heroes in the age of Trump. Hopefully the real laughs will come after the mid term elections...

Hi anon...Yes I thought the idea that he should be detained by the Secret Service and then told to leave the arena was outrageous. It’s one thing to remove someone from their position right behind Trump, but surely he should have been allowed to watch the monkey show from somewhere else. But then the Trumplings are obsessed with providing a proper background for their Fuhrer, including making sure that signs like “Women for Trump” or “Blacks for Trump” are prominently displayed, which is of course farcical...

Staging of political events really dates back to Roman times. The NAZI perfected the modern propaganda state. Justin Trudeau turned back the clock by going unscripted into the lions den. Andrew Scheer has continued the Harper tradition of total astro turf all the time. Its is the con candidates who dont show up for debates, shame shame.

On the bright side even big dougie gave up with the clapping obstruction. If only he admitted during the campaign his chief goal was to be the strong mayor of Toronto.

In China its already used in the classroom to Pavlov dog the children. Social Media is used to decide if you can have a job, take a train etc. North Korea is not seen as a horror show but as the ultimate goverment.

That is brilliant and priceless. Lets hope we see more of this resistance.