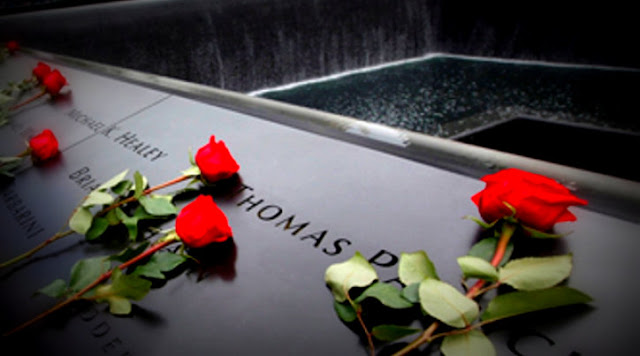 As you know, yesterday was the 17th anniversary of the 911 terrorist attacks. A day to remember the dead, and all those who lost their loved ones.

And a day when the President of the United States is supposed to set aside his partisan instincts and act like the comforter in chief.

But sadly Donald Trump was unable to restrain himself.

And his crude behaviour shocked the nation. 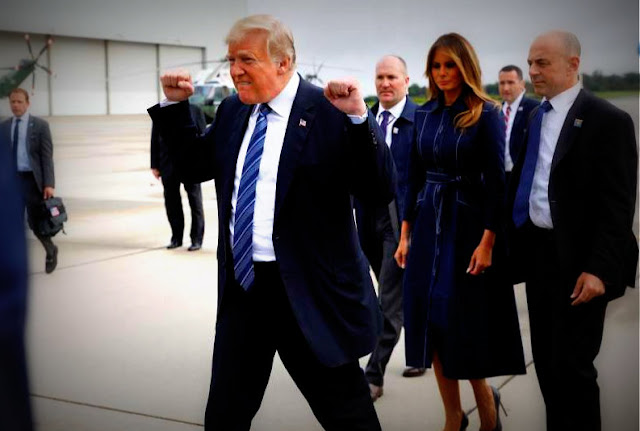 For that's him in Pennsylvania yesterday, greeting his supporters with a double fist pump, as if he was on his way to a football match instead of a memorial service.

And while Barack Obama, the man he hates more than anyone in the world, with the possible exception of Robert Mueller, was able to rise to the occasion: 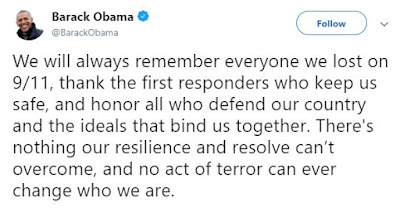 Trump's puny effort made it sound like the 911 anniversary was something we should celebrate.

But at least Trump's ghastly day inspired Mother Jones' Ben Dreyfuss to try to imagine what was Trump thinking?

And I thought his story was hilarious.

Although like all Trump stories it's also pretty scary.

On the other hand others were inspired... 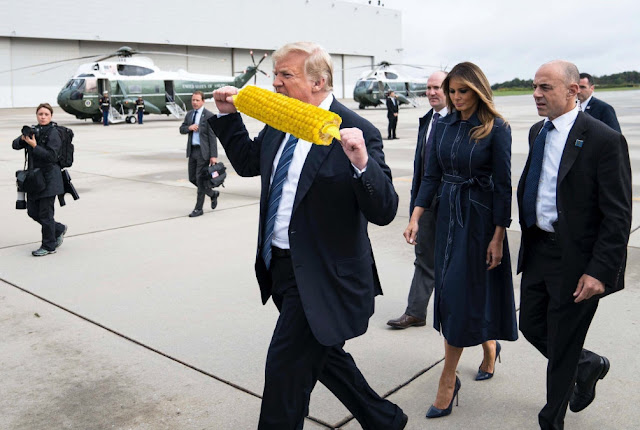 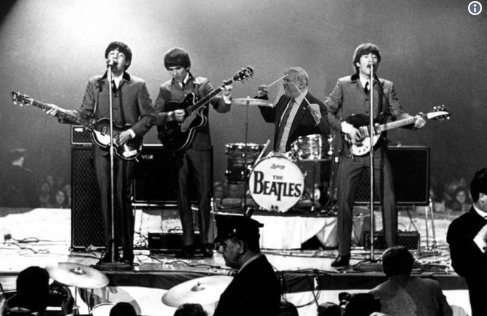 And I had to add the Canadian angle eh? 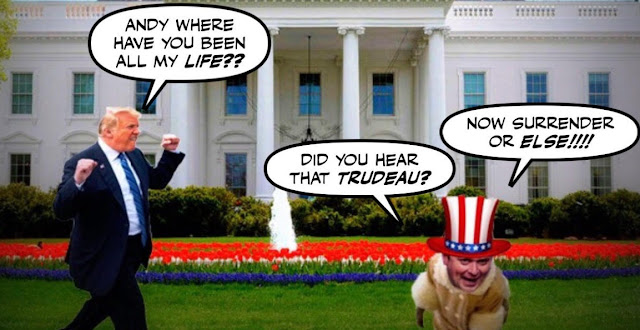 But of course none of this is really funny. Not when we're dealing with a man who could start a nuclear war tomorrow.

And who looks these days like he's clinging to his sanity with both hands... 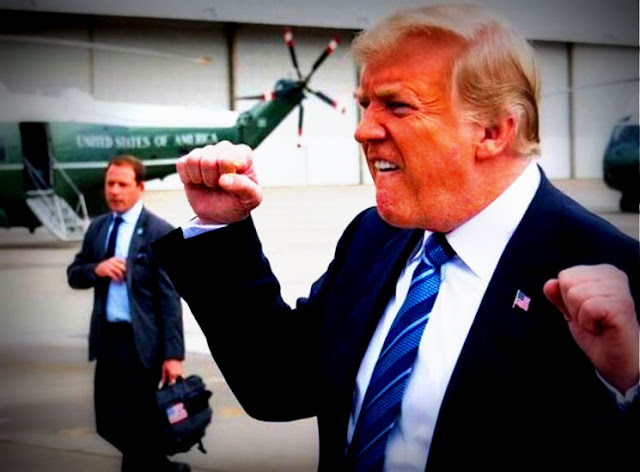 I have no idea how long he can hang on, but it can't be much longer.

And I think we can all agree.

The sooner he's removed from office the safer we all will be...

Labels: 911 Commemoration, Donald Trump, The Madness of Trump, The Rise and Fall of the Orange Oaf

None of this behaviour ought to be unexpected. He just can't help himself. He doesn't know how to behave appropriately. He just doesn't care. Pumping his arms and fists like he was at a football or base ball game is not appropriate. he looked like the idiot he is. This was a solemn occasion and he turns it into s circus. Ah, well, people get what they deserve when it comes to voting.

The most hideous 911 horror show is the total silence concerning what and how did this happen. Not a JFK like word of dissent anywhere. In fact the questions surrounding 911 make the Kennedy assassination look like a parking violation.

This should inform our thoughts regarding ISIS and just what is going on in both Syria and Ukraine today.

And he has the damn nerve to declare Canada a "national security threat" after Justin made a good-faith effort to promote positive ties between the two countries by inviting Ivanka and Jared to go see Come from Away with him and Sophie. He even invited Donald and Melania but, of course, Donald wasn't interested. It wasn't Trump: The Musical, with Apprentice-reject cast members singing the praises of one Donald J. Trump, so therefore it was "low-energy, failing, fake news, sad."

Like Obama, Trudeau is a "threat" to Trump's personal "security." Trump brought up that idiocy about the War of 1812 in NAFTA talks, while at the same time his social media cultists dredged up that bizarre and insulting conspiracy theory that Canada was complicit in 9/11. Then turns his back on Trudeau when Saudi Arabia threatens to repeat history at the CN Tower! With "frenemies" like these...?

And the Rebel scum like Scheer who've basically cozied up to him out of their own personal vendettas against Trudeau have betrayed their country and should never be forgiven. Because if anyone is a threat to international security, it's one Donald J. Trump. Who, as Hurricane Florence prepares to annihilate the Eastern Seaboard (in states that voted for him), is about to accomplish a feat once thought impossible: outdoing George W. Bush as the most incompetent Republican president once and for all -- if not THE most incompetent president, ever, period -- by fucking up a Katrina in the making, the week of 9/11 at that. Lolly-lolly-lolly, get your paper towels here.

The only thing that has me clinging to hope is the possibility that Hurricane Robert will take out his empire and evacuate the whole lot of them to a permanent FEMA camp at Leavenworth. Don't come from away mad, Donald, just go away.

Trump has got away forever on bullshit baffles brains. By being the guy who borrowed billions not had a mortgage on a family house. He is not going to change from what has worked. What the world needs to do is tell him thats not reality. Unfortunately the world works just like him.

Both Trump and many of his followers live in distorted reality fields. According to Tim O'Brien a longtime Trump biographer "he lives in his own distorted reality field - there is a narrative going on all the time in his head about how successful he is, how great he is - it allows him to plow ahead after he makes mistakes". His followers also have a narrative going on in their heads. It goes something like the following every time a change/law or new regulation is introduced .. those f****** politicians are at it again, they should all be fired, jailed or ????. Before the weaponization of Facebook the narrative was mainly a crutch to get through the day and something to share among friends but when voting time arrived many just stayed at home because the narrative applied to all government at all levels. Facebook followed by other media outlets changed that. Thanks to modern data techniques suddenly they seemed connected to thousands of like minded individuals and a leader who verbalized their internalized narrative... someone they could vote for and they did.
Its now almost 2 years later. Trumps narrative will never change and its unlikely the core with their own internalized narrative will change until they are eventually replaced. In the interim, hopefully some with a more balanced political view will realize their mistake and change votes the next time around. Also there are some signs that the ability of social media to capture and motivate the like minded Trumpians is weakening. The market cap of Facebook is in decline and some sites have discounted or banned the worst of the worst. If the social media spell can be broken his followers will return to cerebral fantasy land where all politicians including Trump are viewed as asses.
RT

hi e.a.f...I'm afraid you're right, he just can't help himself. The question is whether that behaviour is the behaviour of a spoiled millionaire, or is it dementia? I'm leaning towards the latter...

hi Steve...I have watched enough documentaries, and read enough books and articles to find all that talk of a conspiracy totally ridiculous. The Kennedy conspiracy people were bad enough, but the 911 crowd makes them look almost reasonable. You know a couple of years ago I was sitting outside Portland airport, which is a very quiet leafy place, waiting for my cousin to come and pick me up. When a loudspeaker hidden in the bushes sounded off the usual warnings about not leaving your luggage unattended etc etc. And I remembered that it was from this quiet airport that the leader of the 911 hijackers left from on that fatal day. And that's why the plot succeeded, nobody could imagine that kind of horror...

Hi Jackie...I just finished reading a harrowing story about the suffering of the people of Puerto Rico, so when I read how Trump was boasting that he had done a great job there I almost felt like vomiting. The way he doubles down on anything negative by trying to turn it into a positive, reminds me of how a three-year-old might behave, and is yet another reason he never should have been elected President, and should be removed as soon as possible...

Hi RT...yes, it's important to remember that not only is Trump's grip on reality continuing to slip, so are his polls. And the Democrats stand a very good chance of making enough gains in the mid term elections to cripple or at the very least slow the beast down. And if that happens I would not be surprised if Trump decides to resign, claiming that the "Deep State" has made it impossible for him to "save" America, and has forced him to spend even more time on the golf course. It reminds of that movie with Peter Sellers, where he plays a sweet but slightly retarded gardener, who everybody thinks is a genius...

how at the height of the cold war did Oswald wander between Russia and the USA?

There are way to many unanswered questions about both events to dismiss out of hand conspiracy.