The Real Reason Stephen Harper Wants to Cling to Power 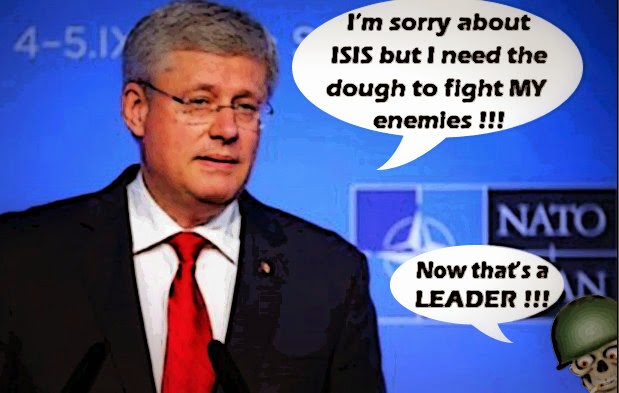 Well I'm not surprised that Stephen Harper was looking so beat up at the end of the NATO summit. I mean just look at him.

For a moment I though he was going burst into tears, or resign on the spot.

But then it must have been painful to have to tell the other leaders that despite screeching like a chicken hawk, he won't put his money where his mouth is, because he needs the cash to bribe voters in the next election.

So much for Great Warrior Leader.

And as fate would have it, on the very same day, so much for Great Economist Leader.

The Canadian economy shed 11,000 jobs in August but the unemployment rate stayed the same at seven per cent, Statistics Canada reported Friday.

Although mildly negative, the monthly jobs number wasn't what drew the most attention. Instead, economists noted a large drop of 111,000 private-sector workers — a monthly record.

Because that's a real disaster, and the only reason it isn't even worse is because so many people claimed they are now self-employed.

Ordinarily, a huge drop like that would weigh heavily on the headline jobs number. But it was offset by an almost equally large gain of 87,000 self-employed workers.

Which may only be concealing the true extent of the catastrophe.

"When a large increase in self-employment coincides with a large drop in positions paid by an employer, it begs the question of whether Canadians are becoming self-employed by choice or because jobs are not available," United Steelworkers economist Erin Weir said.

And it couldn't come as worse news for Harper and his useless Finance Minister Joe Oliver who are always claiming that tax cuts create jobs in the private sector.

And everyone knows that Ol' Joe is just following orders... 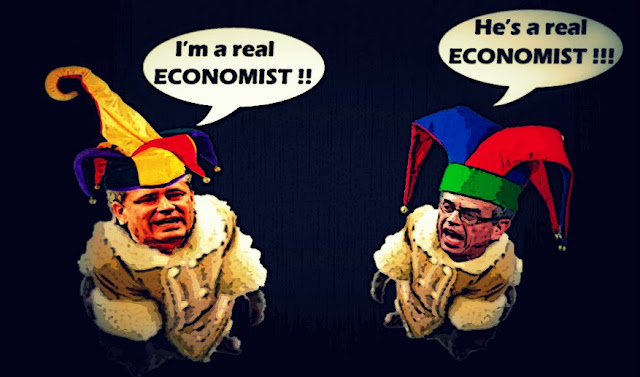 Which makes me wonder now that Harper has lost his phony credentials as a Great Strong Leader, and as a Great Economist Leader.

And his Great Crime Fighting Leader act isn't going anywhere. Not when the crime rate has been going down for YEARS.

What does he have left to run on? And why isn't he resigning NOW before he takes the whole Con party down with him?

And the answer is Stephen Harper isn't in it for the party or the country. He's only in it for HIMSELF... 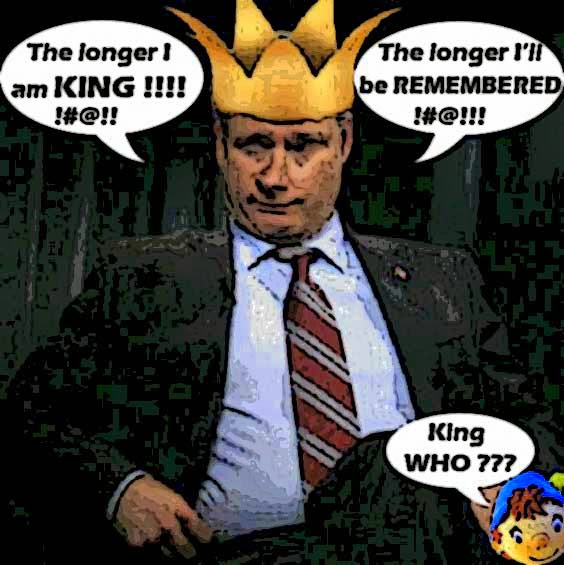 All he's interested in now is improving his position in the Guinness Book of Longest Serving Canadian Prime Ministers.

Harper, who has passed the eight-and-a-half year mark in Canada’s top political post — and ranks ninth on the list of longest-serving prime ministers — is on the cusp of leapfrogging three of those predecessors to the No. 6 spot, and becoming second only to Sir John A. Macdonald among 13 Conservative PMs in time spent at the helm of the nation.

By mid-September, according to the Canadian government’s official time-in-office listing, Harper will move up to eighth, passing post-war Liberal Louis St. Laurent. Then, within a stretch of nine days in November, Harper will overtake Conservative/Unionist Sir Robert Borden, and Conservative Brian Mulroney to stand sixth.

Which is the main reason he's still clinging to power like a leech, and of course also helps explain why Brian Mulroney is so pissed. 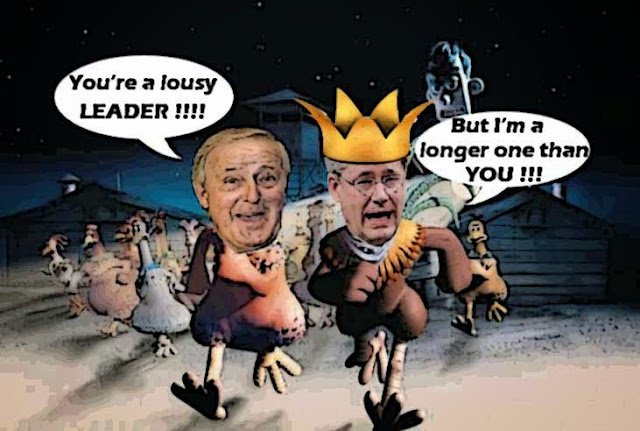 Brian Mulroney is pulling no punches on the 30th anniversary of his historic majority election win, chastising Stephen Harper on everything from foreign affairs to the prime minister’s spat with Canada’s top judge.

And who can blame him eh? When despite his many flaws Mulroney was a better and more Canadian Prime Minister than Harper could ever hope to be.

But here's the bottom line: after he overtakes Mulroney he will have to make up his mind whether he goes after Jean Chretien's record.

It would take Harper until March 2016 to pass Liberal rival Jean Chrétien.

Or resign early in the new year if he's going to give his successor a fighting chance to win the next election.

So I wouldn't be at all surprised if he announces his decision to resign over Christmas and cut and runs in late January.

For even he must see the writing on the wall.

Or read the depth gauge in his submarine... 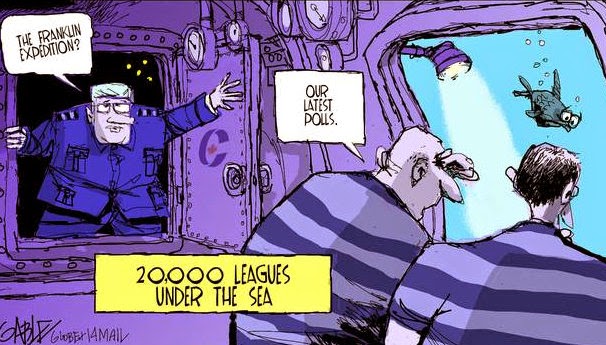 Yup. He may eke out a few more months to give himself a cheap thrill.

Or he may decide to go for it, and take the party down to the bottom with him.

But nothing will change the fact that he is the worst Prime Minister in Canadian history.

Canadians are sick and tired of him. And one way or the other.

He'll hold onto to power for as long as possible to try to avoid the genocide charges leveled against himself and Israel.

Hi Simon. Good posts lately, thanks. I can't help thinking that Harper has isolated himself so much from the public discourse in this country, and he is so mentally ill with egoism and dissociative disorder that he may, in fact, be completely unaware of 'the writing on the wall.' He may not even know about the polls for the past year and a half that put Trudeau and the Liberals ahead, and for all we know his short pants brigade has been telling him that he is immensely popular and set to win another majority. I have a vision of Harper, like Hitler, ensconced in his bunker completely oblivious to what is really happening. They say that until the Russians actually entered Berlin, Hitler still though the Germans were winning the war. That is why I suspect that Harper will not resign or even willingly leave the office of the PMO when he does actually lose.

Dollars to donuts brave Sir Stephen, aka Great Chickenhawk Leader, aka All Hat, No Cattle, will be running for the hills before the end of the year. His party will be putting the pressure on him, having seen the success of the strategy when McGuinty bailed in favor of Wynne, and remembering what happened to Kim Campbell. And the fear of losing their own seats will motivate some of his MPs to start wielding their knives soon.

The only way he will beat Chretien's record is if he prorogues Parliament permanently. Or stuffs the ballot boxes. However, based on his track record, we should not completely rule out either of these, eh?

I agree with Kirby.
Harper has an ego, the size of Mount Everest. All the dictators of the 30's and 40's refused to step down to save their own countries nor their people. They were all sociopaths as Harper is. They are only capable of caring about themselves and to hell with the people. I have no idea why, that monster is still running this country?

Harper began attacking Trudeau, the minute he won the Liberal leadership. Trudeau hadn't been in office long enough, to earn Harper's hate, spite and malice. Harper's behavior even shocked his own team. They refused to send out, Harper's hate literature on Trudeau. However, the Ministers permit Harper to cow them. I have no respect for any of them.

Harper most certainly will use, every underhanded tactic in the book, to cheat this next election too.

He's a crook and Canada wants him out. This time he's gone.

hi Morlock...well he'll never escape those charges, but I still think that once he has improved his position in it that record book, if his polls don't improve he may have to resign or be pushed out, or face being humiliated by a Trudeau, which as we all know would just about kill him....

hi Kirby...you may be right, Harper is definitely living in his own head, and the flunkies in the bunker aren't about to tell him anything he doesn't want to hear. But if his polls don't improve there will be pressure on him to step down, and as I said above, I'm sure he REALLY doesn't want to be humiliated by Son of Trudeau so I think anything is possible. As is I should add a really early election. I suggest that you and I stock OUR bunkers with food and water because we're in for a wild ride. The Cons are desperate, and harper's crazy, so they are capable of anything...

hi anon...yes I think that Great Chicken Hawk Leader's pathetic performance at the NATO summit is worth a dozen donuts, or at least six. But the good news is that we won't have to wait too long to see what he is going to decide. Because late January is about the latest date he can announce he's stepping down if the party is to choose a new leader in time for the next election....

Sad times for Canadian when a sociopathic tyrant like dark-minded Harper can use taxpayers money at will with no one to stop him or his puppets. Unfortunatley, when he and his self engraciating gang leave office, Canadians, once again will have to pay the price and that will be jobs losses in the millions. But these dictators always have a nest egg where they can hide and keep the taxpayers money they legislated for themselves. How sad for the rest of us!