Big Daddy Harper and the Climate of Fear 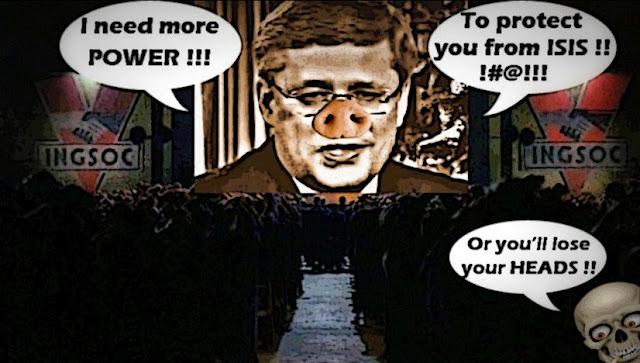 Well in my last post I predicted that Stephen Harper would try to use the ISIS threat to behead Canadians in their bedrooms, to maximum political advantage.

By trying to make it sound like we are in real danger, and that only a Great Strong Leader like Himself can save us.

And sure enough there he was today, sounding like Big Daddy.

“We have, as you know, strengthened laws in this country to deal with these kinds of threats. We’re currently in the process of examining these laws and examining other means we may have to monitor and to take action against both organizations and individuals who may undertake activities that are potentially threatening to Canadians.”

Trying to use the occasion to justify the sinister surveillance state bills he has been trying to ram through Parliament. Even though they are badly written, a massive invasion of privacy, and/or unconstitutional.

And use the ISIS threat to make us believe we are entering a new and dark Age of Terrorism, just like his Con buddy Tony Abbott is doing in Australia. 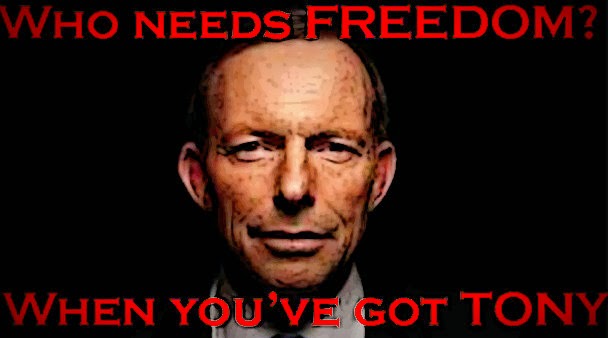 Australians must accept a reduction in freedom and an increase in security “for some time to come” to save lives from the significant threat of terrorism, Tony Abbott has told parliament.

The prime minister asked Australians to support a shift in “the delicate balance between freedom and security” as he sought to bolster his case for the biggest overhaul of the nation’s counterterrorism laws in a decade.

Because like Harper he too is desperate, and would use fear as a weapon to try to get people to vote for him.

Or pose as a Great Strong Leader like his buddy Steve... 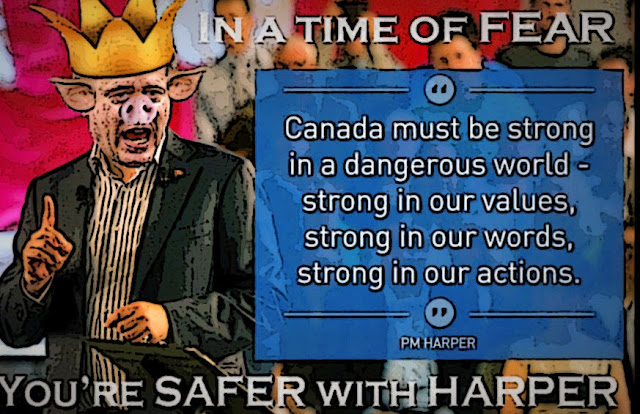 When in fact we have all the laws we need to protect ourselves from homegrown terrorists or any others.

ISIS poses no greater threat than Al Qaeda did. They prefer to prey on the weak. They can be weakened by bombing.

And they can be defeated relatively easily once they lose the support of the secular Sunnis in Iraq,  who are only supporting those religious fanatics because they've been persecuted by the Shiite government in Baghdad.

And when Canada and other nations take a harder line on countries like Qatar and Saudi Arabia that created that Frankenstein.

We encouraged two oil-rich Arab states, Qatar and Saudi Arabia, to continue arming rebel groups to oust the ruthless dictator in Damascus. Now, thanks to those weapons, one of the groups has grown into the Frankenstein's monster of the so-called Islamic State whose brutal fighters have swept through Syria and Iraq, crucifying and beheading like a deadly inhuman tide.

Instead of selling them weapons.

And the idea of surrendering our civil liberties just because some hairy fanatic obviously under the influence of drugs or crazy religion, rambled incoherently into a microphone for 45 minutes and threatened to behead us in our bedrooms, is utterly INSANE.

And nothing less than an unholy alliance... 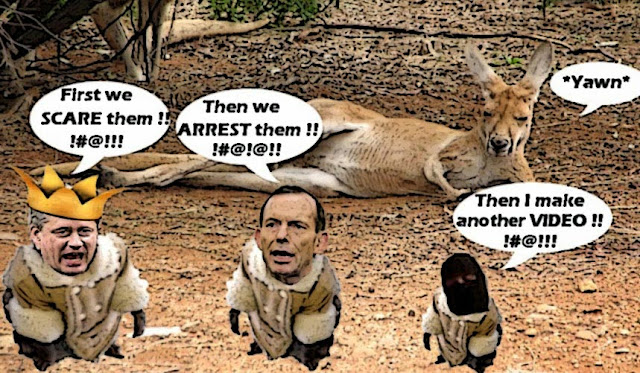 To try to scare us all into submission.

Which is why I'm not sure what to make of Michelle Rempel's contribution to this climate of fear. 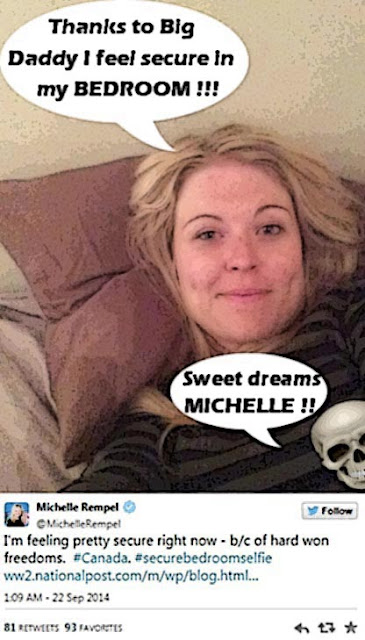 Because if she's serious, we WILL lose our "hard won freedoms" for no good reason.

And if it's a parody, albeit unintentional, I prefer this one..


And either way Boss Harper won't be amused... 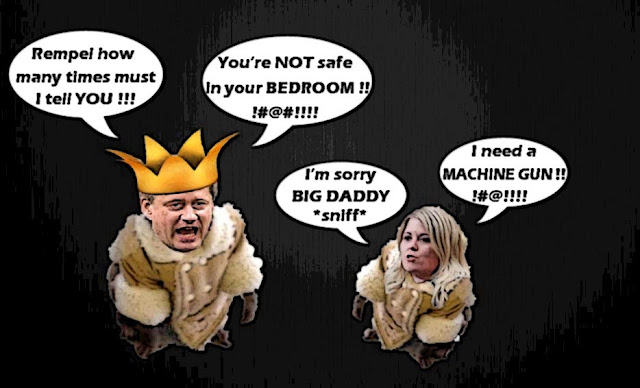 Because he wants to make us feel we're not safe ANYWHERE without HIM to protect us.

And while I find that idea amusing, considering that he's a far greater threat to this country and its values than the crazies from ISIS.

What annoys me is that he is trying to scare the old and the vulnerable. 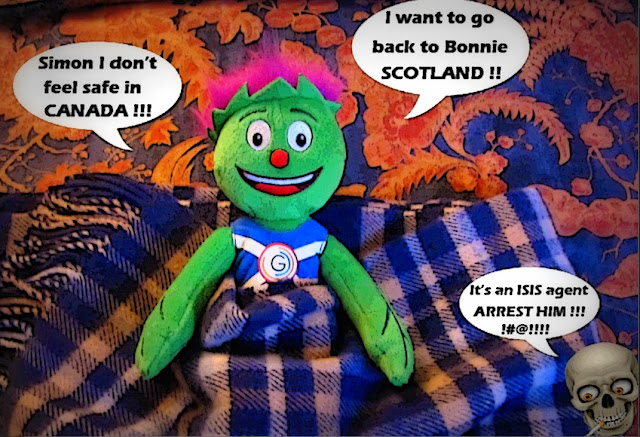 Who now wants to return to where he came from, even though I keep telling him the NO side won, and Harper WILL be defeated.

Because of course that is the bottom line eh?

A leader who would use fear to try to get Canadians to vote for him, or try to turn us into a police state, is unfit to remain in office.

The only thing we have to fear is fear itself.

And Big Daddy must be beaten... 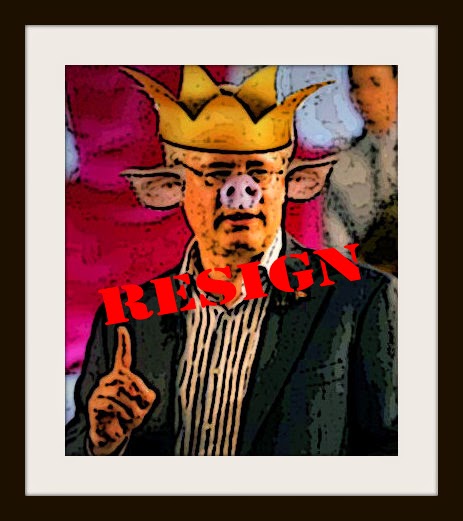 Why do Justin and Thomas not come out full bore on this? Because history had proved the merest false flag will cow the sheep.

In the midst of a an epidemic of missing/murdered Aborginal women, we get #SecureBedroomSelfie.

Harper is the worst terrorist that Canada has ever had. There is chatter the Commonwealth is going fascist. They have to be fascists to support Harper.

Harper blasted Russia regarding, Russia's annexing of Crimea and the Ukraine issue. Strangely, Harper has said nothing of, Communist China doing the exact same thing. Harper has even sold Canada to Communist China as of, Oct the 1st.

Jason Kenny is bringing over foreigners to work the resource jobs, China isn't taking. These foreigners apparently are not ticketed nor certified. Some buy their certificates and tickets in their own countries. One foreigner was going to thaw a propane tank, with a blowtorch.

The opposition says nothing of Harper's treachery because, all of them are in on it. This is the global movement or the NWO, we have been hearing about. Harper has sold Canada to Communist China, as of Oct 1st. Communist China is one of the most hated countries on the globe. The opposition has said??? Foreigners are being given Canadian resource jobs, again the opposition does???? I was very suspicious of, Harper's plane stuffed with people when, he paid Israel a visit.

As we now hear, Harper's little henchman Speaker of the House is, back to his underhanded cheating tactics. Calandra was ranting and raving as usual, he always reminds me of Goebbels.

Most of us know? Harper is a traitor doing acts of treason, against Canada and the people. The opposition would have us believe, they can do *nothing* about *nothing* about Harper's treachery.

As soon as Harper has enough ethnic peoples votes, he will call an election.Harper sold Canada to Communist China. There are more Chinese in Canada, than Canadians.

Critics question use of official photographers to capture Harper's good side