Why Are the Harper Cons Stealing Government Land? 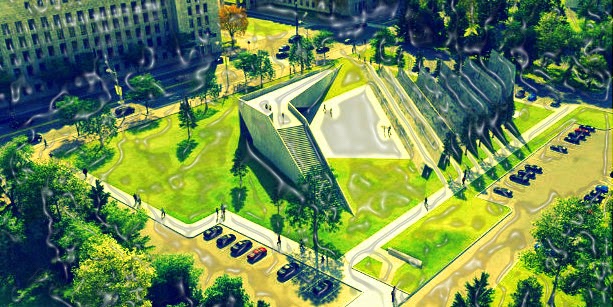 Its design has not been finalized, but it will be called the Memorial to the Victims of Communism.

It will be built on a choice piece of land in the heart of official Ottawa.

Land a well known architect is now accusing the Harper regime of stealing.

A prominent Ottawa architect is accusing the federal government of “stealing” the site that’s been chosen for the new Memorial to Victims of Communism.

In an open letter to Stephen Harper, Barry Padolsky urges the prime minister to find a “more appropriate” location for the memorial, to be built on a 5,000-square-metre property on Wellington Street, next to the Supreme Court of Canada.

And it's not hard to figure out why the Cons are doing that.

To show their contempt for the justice system, and the legacy of Pierre Trudeau.

That site had long been designated as the future location of a new building for the Federal Court of Canada, called the Pierre Elliott Trudeau Judicial Building in government planning documents.

Padolsky says the Trudeau building — or another comparable structure — is the missing piece in a planned “judicial triad” that would include the Supreme Court of Canada Building and the Justice Building on its eastern flank.

And it couldn't be cheaper or more disgusting.

For first of all, what is something that could look like this doing in the heart of our country's capital? 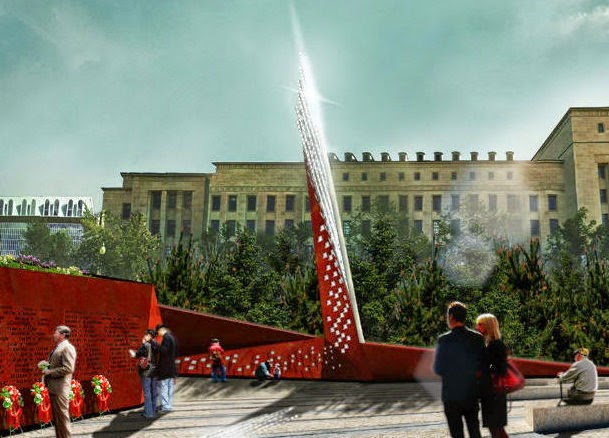 Are we Canada or Latvia?

But what makes this squalid story even more disturbing, is the way government departments have bent backwards to satisfy the deranged wishes of the Con regime.

In 2011, the National Capital Commission reserved a site for the proposed Memorial to Victims of Communism at the Garden of the Provinces, on Wellington Street just west of Bay Street.

But, in May 2012, Public Works allocated the current site to Tribute to Liberty, the charity behind the proposed the memorial. According to an email from the Department of Canadian Heritage, the current site “was deemed more favourable” by Tribute to Liberty because of its proximity and “thematic links” to the Supreme Court of Canada, the Peace Tower, Parliament Hill and Library and Archives Canada.

When there are no "thematic links" to any of the other buildings in the area.

The whole idea is just the product of Stephen Harper's Cold War mentality, his hatred of the courts... 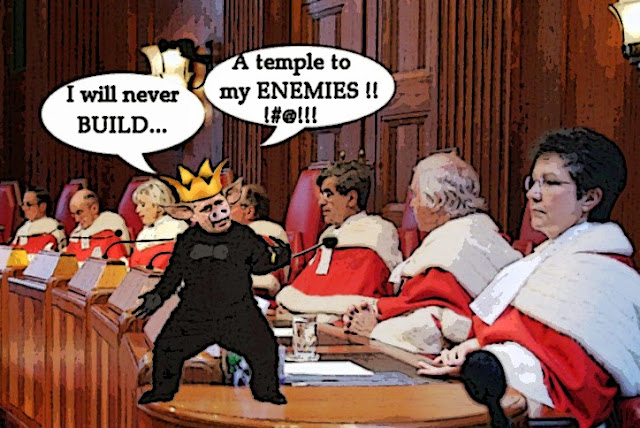 And of anything Trudeau.

As well as just another scam designed to buy the ethnic vote with millions of OUR tax dollars.

A left-leaning think-tank was targeted by the Canada Revenue Agency for a political-activities audit last fall partly because the research and education material on its website appears to be "biased" and "one-sided."

Tells you all you need to know about about this ghastly Harperland.

And suggests to me that we need a monument to the Victims of the Con Regime more than we need any other.

For nobody has violated our country, its people, and its democratic values, more than Stephen Harper and his filthy government.

So may I suggest that one of the first actions of a new progressive government should be to cancel that project.

Or bulldozer it out existence.

As soon as we take down this monument... 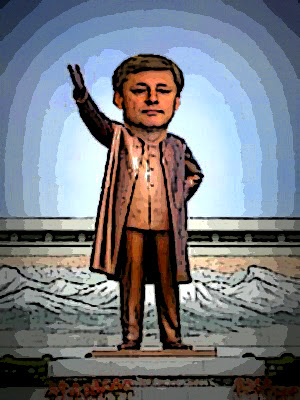 For the man was a tyrant, and a monstrous MANIAC.

He deserves nothing but contempt.

Freedom is a precious thing.

And we can't defeat him soon enough...

Labels: Con Klowns, Monument to the Victims of Communism, Stephen Harper, The End of Con Canada

If we manage to defeat them, we should destroy everything they ever tried to make. No matter what the stage. Let harper and his stooges complain about it in the prison courtyard.

What is done in the darkness

will be seen in the light.

If "Tribute to Liberty" is a charity that is building this monstrosity it seems to me like it's using all its money for political purposes.

Let us not forget - http://westcoastnativenews.com/national-holocaust-monument-to-be-built-on-unceded-algonquin-territory/

Hear, hear! I agree, thwap. Every stroke should be felled.

Since when has Harper ever had anything against Communism? He just had a sneak meeting with Communist China. What about Harper's FIPA deal with Communist China? Didn't China just get the jobs, building the LNG plant near Prince Rupert? Just who is getting the raw logs of, BC's 400 year old Douglas Firs near Port Alberni? After all, Harper did pay a visit to Vancouver island. China was eyeing BC's ancient forests and I signed the petition against that treachery. Didn't Petro-China put in a bid to *help* build the Enbridge pipeline?

Harper is low-life fascist scum. Harper's cabal are, useless, spineless and gutless wonders. This is vindictive little Stevie getting even and he needs, a full mental evaluation. There is something, sadly badly wrong with Harper.

Great , ANOTHER museum in Ottawa /Gatineau that no one will visit.
What did the museum of civilization cost anyhow? $200 million? $500 million. And the war museum? ( Which should be called the Army museum because there is almost zero mention of the Navy or the Air Force in the entire building).
Let's face it, the only museum in Ottawa designated to communism has already been built.
Its located on Parliament Hill

hi thwap....I like your spirit. I personally think we should obliterate all traces of their miserable years in power, Delete all records, and change any name they gave to anything. And of course investigate them thoroughly so we can send as many as possible to the Big House...

hi Beijing....I think you and thwap would make a great demolition crew. Thwap behind the wheel of a bulldozer, and you with the wrecking ball. I'll just wield a shovel, and scoop up the rubble. It'll be a long hard job, but I'll enjoy every minute... :)

UU4077...I don't know if it's a registered charity, but his project has now received more than $4 million of OUR money, and it certainly is a monstrosity. If they want to out up a monument that's fine. But not in the heart of the nation's capital, and not with my money....

hi Natalie....no we can't forget that either. But it does give me an idea. How about a monument to the First Nation Victims of Canada. That's a monument I would be proud to pay for....

hi anon....Harper grew up bouncing on the bony knees of Margaret Thatcher and Ronald Reagan. They all did. So being a Cold War Warrior is like going back to his roots. But of course, the main reason for this monument, is to try to get the ethnic vote to bounce up and down on his knees...

hi anon...I would like to see that ground used for the purpose it was intended. As for your comment that the War Museum should be called the Army Museum, I can see why you say that. But there is also the Aviation and Space Museum, so the Air Force does have its place. So that just leaves the Navy, Maybe we can float it up the Rideau and lay siege to your so-called Museum of Communism... ;)

I couldn't stop laughing and most likely neither will other countries. Is this guy for real? a monument for the victims of communism???? Like what happened to the deficient. I thought we needed to get rid of that and harper and his herd have money for monuments? The guy is ridiculous. With Veterans in need of housing, lets just build housing for them and forget about the monuments or how about some housing for kids on reserves in the north. These cons really are running a con on this country. Oh, who gets the contract to build the thing?

If harper wants to build a monument let it be to the victims of harper or to the 1,200 and counting missing and murdered First Nations Women. Make it Canadian.

When I visited the "war" Museum a year ago I asked a curator, "Where are the navy and air force displays?" She directed me to the "Air" museum on the other side of Ottawa for the "Air Force" ( It has all planes not just military). She then directed me to HALIFAX to see the Naval museum.........
I then went for a walk to Parliament hill and overheard two men in army uniforms talking at a traffic light and the conversation went like this...," Where ya been? Havent seen you in ages!".... "Oh! I burned myself really bad with a coffee pot at the office and took 6 months off ....."
One can only hope he didnt recieve some sort of medal for that "wound".

Wow! this is kinda like communism. When you rewrite history by destroying everything from the past and then telling your version. I cant wait for the New World Order according to Simon.