Stephen Harper and the Ghost of Captain Franklin 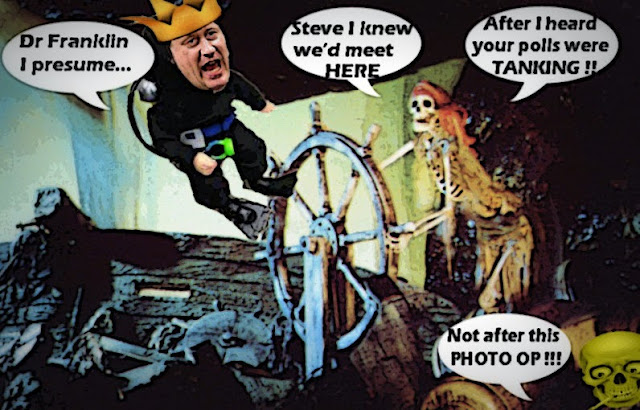 It was just two weeks ago that Stephen Harper was talking about the search for the lost Franklin expedition.

And how he couldn't wait to find, in his macabre words, "the skeleton of Franklin slumped over the helm."

And today he did.

Or a least a team of researchers did find one of the ships.

Prime Minister Stephen Harper says one of Canada's greatest mysteries now has been solved, with the discovery of one of the lost ships from Sir John Franklin's doomed Arctic expedition.

"This is a great historic event," Harper said.

Although you'd never know it from the way he hogged the show. And made it sound as if he was personally responsible for the find. Blabbing on and on about it as the PMO cameras hummed like hornets.

But then as Stephen Lautens pointed out, he would...

A futile & disastrous misadventure that ends with everyone eating each other. No wonder Harper feels such kinship. #Franklin #cdnpoli
— Stephen Lautens (@stephenlautens) September 9, 2014


And of course for the Con Ministry of Propaganda and Disinformation it was a golden photo-op.

In fact, so happy were they that they released a shiny new video to celebrate their Great Leader...

Which is definitely a more upbeat version of Harper than we have seen in a long time.

And no doubt mentioning "God" twice in 30 seconds must have his rabid religious base in a frenzy, and may actually be the real reason that ad is being run.

But sadly for him, the absurd message "We're better off with Harper" is further undermined by the fact that it is totally fraudulent.

In this case, the Conservative buttress that idea with the fact that 1.1 million jobs have been created since the low point of the recession. That number is more impressive-sounding if you don’t know that 14 months ago the Prime Minister was boasting of one million new jobs.

Yet another blatant attempt to fool Canadians into thinking that he is a Great Economist Leader, and that his job creation programs have been a huge success.

When in fact they have been a total disaster and the economy is in a coma.

We’re roughly a year away from the next federal election, and the recession recovery that forms the bedrock of the Harper government’s political narrative is looking more and more like smoke. Last Friday, Statistics Canada released its Labour Force Survey for the month of August. It showed the economy lost 11,000 jobs in August, following an unprecedented decline of 112,000 private sector jobs only partly offset by an equally unprecedented increase in self-employment.

But of course all that sunny propaganda, all those extravagant photo-ops paid for with OUR money can't but have an effect, and may be boosting his sagging polls.

Prime Minister Stephen Harper’s Conservatives still trail the Liberals in the polls but continue to cut into that lead for the second month in a row, the latest survey by Forum Research shows. The Sept. 5 poll of nearly 1,300 Canadian adults found that the 16-point lead Justin Trudeau’s Liberals held over the Conservatives in July has dropped to six points.

And boosting his DELUSIONS... 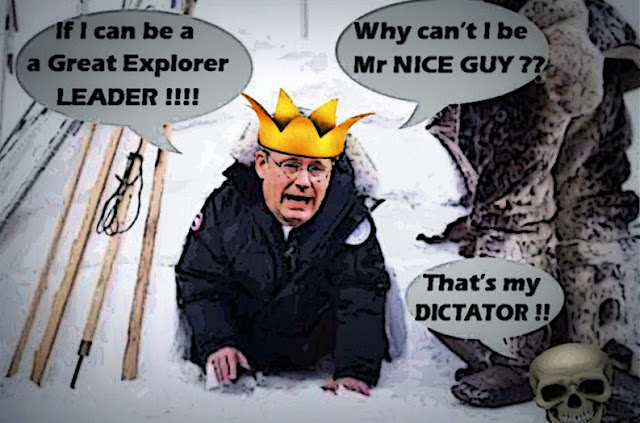 Which could increase the danger of him going for a very early election, as I warned about in this post.

Any popularity Harper may have gained during this golden photo-op summer will fall away from him when Parliament resumes, like leaves fall off a tree in the fall.

For selling himself as a Great Economist Leader when the facts argue the opposite is a losing proposition. One that can only make him look like even more of a fraud, or a Con artist.

And trying to portray himself as a sunnier, nicer leader won't go anywhere either.

Not when by now most Canadians know the real Stephen Harper... 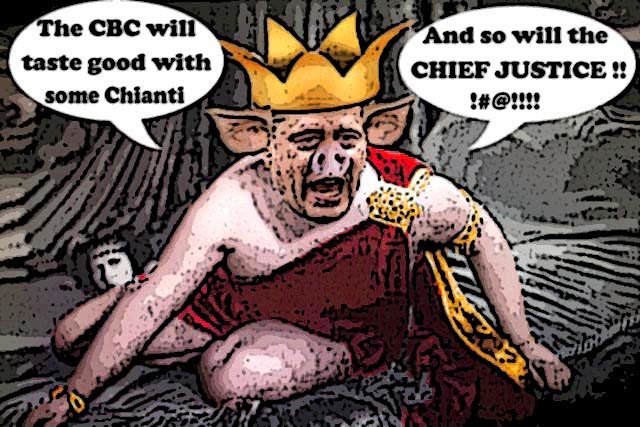 And know that whatever he may pretend to be, or whatever the voices in his head command him to be, he is definitely NOT a nice guy.

So if he deludes himself into thinking that he might be able to repair his popularity and  go for an early election, he may well find himself recklessly exposed.

Or changing places with Captain Franklin... 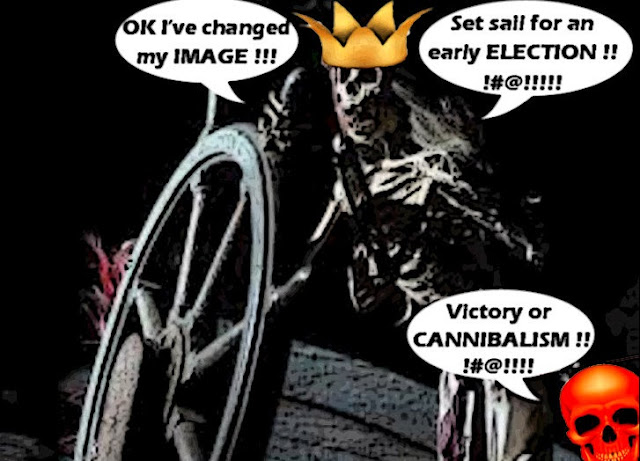 Yup. He is still the depraved leader of an old and tired government.

He is still the most hated man in Canada.

His golden summer is almost over.

And he is still going down...

But he won't go down with ship.

What we have discovered is the bias in the media. Talk about an emperor with no clothes being lauded for his fashion. "The rich have their television in the bedrooms of the poor"
CTV is the conservative television network. Google and see what happened when they interviewed the great Bob Marley.

Scientists found the ship. I'm surprised Harper made any announcement.

We have to add up the jobs given to foreigners. Jason Kenny out and out blatantly lied about, his TFW program. There are foreign workers here, that are not even ticketed nor certified. They are very dangerous to work with. The two people who spoke up about the foreigners, are absolutely right. However, Harper deregulated safety standards, environment safety standards, stripped funding form, the Ministry of Environment and permits the oil, gas and mine barons, to operate with acute shortages of staff. This is what happened in the catastrophic dam burst, at Mount Polley mine in BC. The mine barons are just as greedy as, Harper's oil and gas barons.

I couldn't even drum up any interest, in the discovery of the Franklin ship. Anything Harper remotely touches is fouled. Our Remembrance Day services. Canada Day celebrations. Harper is not a true Canadian and besides which, a traitor has no right to attend and what's more, Harper knows, he and his Borg cabal are not welcome.

Harper the economist has Canada in the worst debt, in the recorded history of this Nation.

Lauten's comments was just so funny! thanks for sharing.

Why, oh why are harper and his herd so anxious to find some dead white guys who have been missing for over 100 yrs but can't be bothered to look for the missing/murdered First Nations Women of the last 3 decades? Like what am I missing. Did they look for the dead white guys because they were white or because they were guys. Now that stevie has found his white dead guys, could he turn his attention to the over 1,200 murdered and missing First Nation's women. We need to know why First Nations Women are murdered at a much higher rate than other groups in Canada. harper's refusal to hold an inquiry simply confirms., in my opinion, he doesn't care about the murdered/missing women and its o.k. by him that they are murdered and missing.