Stephen Harper and the Day of Reckoning 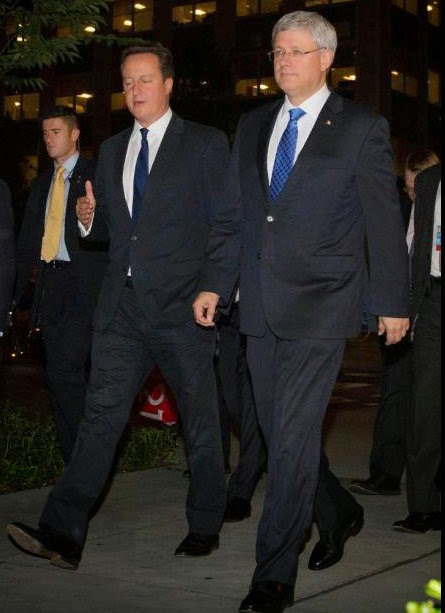 Well there he was last night attending a Climate Summit dinner in New York along with his Con cousin David Cameron.

After skipping the summit itself.

And while Cameron seems very chatty and was no doubt telling him how the Queen "purred" when she heard the Scottish referendum result.

Knowing how much Harper loves the Queen AND cats.

Great Leader seems troubled or very far away, as if staring at his own bleak future, or wondering how he's going to dodge this one.

Suspended Senator Mike Duffy's fraud, bribery and breach of trust case will begin on April 7 and last for 41 days through June, lawyers agreed in court today. These dates mean it's likely any damaging information for the Harper government will emerge before the next federal election, expected in fall 2015, according to fixed election date legislation.

The Day of Reckoning.

The Trial of Mike Duffy just before a fall election, or right in the middle of an early election... 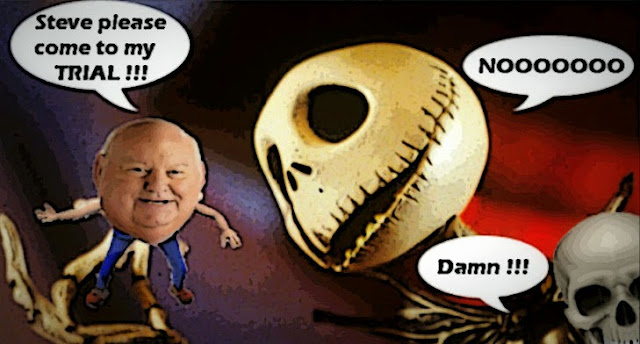 Because that's a REAL nightmare. Especially for a government as old and tired as the Con regime.

And as John Ivison reports, it has a lot of people wondering whether Harper could call an election even EARLIER.

The news that the suspended senator’s fraud trial will begin in April sparked a tsunami of speculation on social media that the Prime Minister might try to call a snap election.

Bruce Carson, a former advisor to Mr. Harper, said it looks to him like 2008 all over again, when the Prime Minister ignored his own fixed election date legislation and called an early vote. Mr. Carson said he wouldn’t be surprised if Mr. Harper pulled the plug after the fall economic update.

Because if Ol' Brucie thinks it, you can be sure Harper must be thinking about it too. Both Con artists are cut from the same cloth.

And while Harper can't be sure what Ol' Duff might have on him... 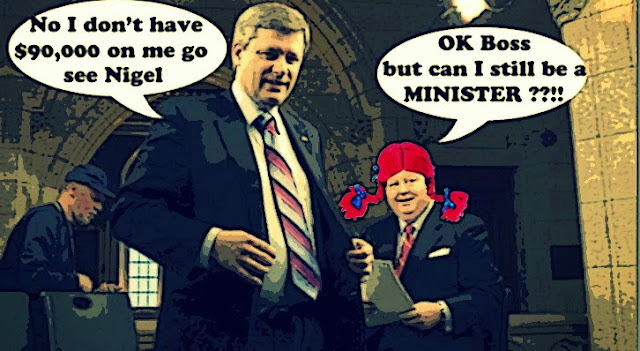 Last fall, Mr. Duffy’s lawyer Donald Bayne hinted that he had evidence showing Mr. Harper knew about the $90,000 repayment. “I do have information. I’m not presently prepared to divulge it,” he said.

The Prime Minister has always said he didn’t know about the payment until it was reported in the media. Persuasive evidence that he was in the know would surely sink his government.

He certainly doesn't want to remind Canadians of their happy days together.

He must surely remember what the Gomery Commission report did to Paul Martin and his Liberals.

Three days before its release, the Liberals were at 40% support in a Nanos Research poll; less than two weeks later, backing for the Grits had fallen to 34%. In the election that followed they attracted just 30% of the votes, despite Justice John Gomery exonerating then Prime Minister Paul Martin.

Voters didn’t care. The public had decided there was moisture in the grain and the whole batch had to go.

And he must surely know that Duffy would LOVE to take him down with him... 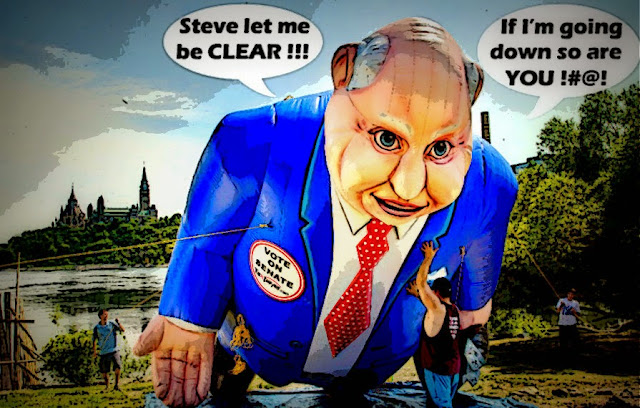 From whichever angle the Conservatives look at it, this news is an unwelcome as Banquo’s ghost. Just as the late Thane of Lochaber had the last laugh, so might Mr. Duffy relish the chance to drag down the party he feels has tried to destroy him.

And as Michael Den Tandt points out, is sure to make the trial quite a show.

Mike Duffy is a consummate showman. Before his appointment to the Senate he was among the best-connected and canniest journalists in Ottawa. He knows precisely how to turn a phrase for maximum effect, as he demonstrated in his inflammatory testimony to the Senate before his suspension.

It is impossible to imagine 41 days of Duffy on trial, let alone a who’s who of senior Conservatives being cross-examined under oath, without new revelations. The media, as the movie cliché goes, will have a field day.

One from which he would never recover.

Which it seems to me leaves Great Desperate Leader only two choices, since holding a fall election would be almost impossible to justify, and the Cons have only nominated a third of their candidates.

Hold the election as scheduled in October, and hope that the scandal has blown over. Or go for an even earlier election in March.

Even if that means fighting a winter campaign like Napoleon... 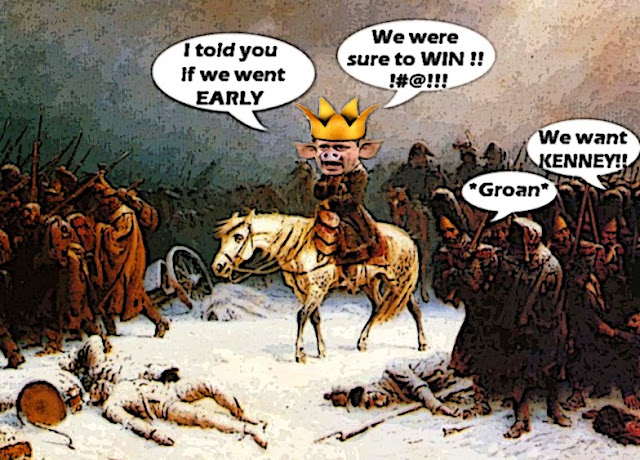 With hopefully the same result.

But of course the bottom line is what I've been warning about for weeks.

He is crazy desperate, the Con War Room is buzzing like a hornet's nest.

So the Final Battle for Canada could come at ANYTIME.

And we better be ready...

I don't think this old country will wake up until it's too late. Harper has called an early election before and he will call one again.

I agree. I think the election will be called for February or March 2015.

If he does, that alone will make many people think Harper has something to hide re: the Wright-Duffy deal.

But like with previous elections, all he is needs to win again is have his base come out to vote.

strange picture of harper. Cameron seems engaged, harper not so much. the body language, the look on his face. its not a good time.

the federal election will be called so it will be over and done with prior to Duffy's trial. if harper knows what duffy knows, then harper isn't going to wait for any trial. If Duffy wants his message out there prior to an election he'd better get that book out by Christmas

Harper's day would have been perfect if his other Con bromance Tony Abbott had rounded out the photo.

Queen isn't a cat person though. Dogs (corgis) and horses.

i agree with you