Stephen Harper and the Screaming Voices 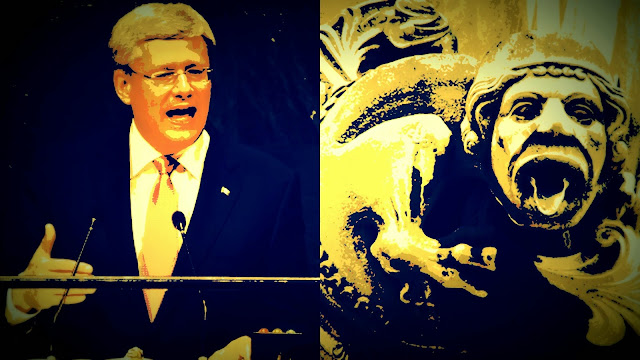 It was one of the weirdest most surrealistic days in the long and dark history of Harperland.

A day when all the voices in Stephen Harper's head seemed to be screaming at the same time.

And in the House of Commons madness ruled.

For there was Tom Mulcair demanding to know why Stephen Harper had told the Wall Street Journal the U.S. had asked Canada to contribute more to the Great War on ISIS.

Prime Minister Stephen Harper says Canada is considering a U.S. request for further military contribution in the fight against ISIS in Iraq.

"The United States has just recently, in the last couple days, has asked for some additional contribution and we'll — we're weighing our response to that."

Instead of first telling Parliament.

Only to have the Con Defence Minister Rob Nicholson confirm the story, but offer no apology or explanation...

Before telling Mulcair if he wanted to know more about Stephen Harper's plans for our troops in Iraq, he should watch Great Leader's speech to the United Nations later that day.

Can you believe that eh? That's how low we've fallen.

And so soon after this... 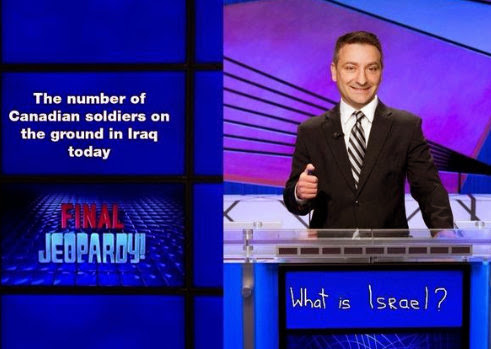 But then this ghastly Con show got even weirder, when it turned out the Americans hadn't approached the U.S., Harper had approached THEM.

Prime Minister Stephen Harper sought details from the U.S. on how Canada could play a more muscular role in Syria and Iraq, an offer that led to the American letter for military assistance, according to U.S. and Canadian officials.

Pentagon officials confirmed to the Star Thursday the Canadians were willing partners who approached them.

Because he does want to go to war so he can pose as a Great Warrior Leader... 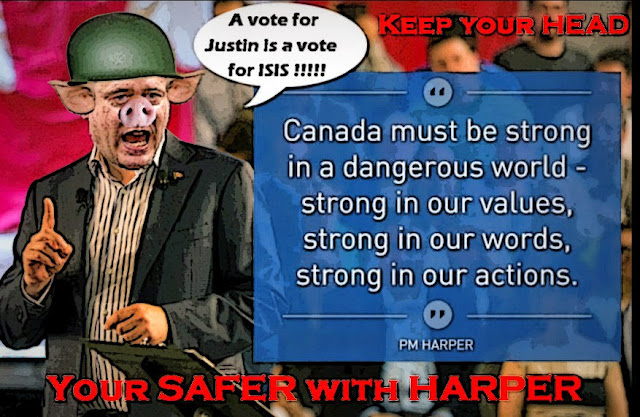 The strong leader who would protect us from those who would behead us in our beds.

And their friends Justin Trudeau and Tom Mulcair.

But he clearly doesn't want us to know how much he wants it.

Because then came the most bizarre twist of the day. When Stephen Harper addressed the United Nations general assembly, and despite what Nicholson had told Mulcair, he never mentioned Iraq.

For by then one of Harper's other voices had taken over. He wasn't Great Warrior Leader anymore.

He was Great Mother Leader. 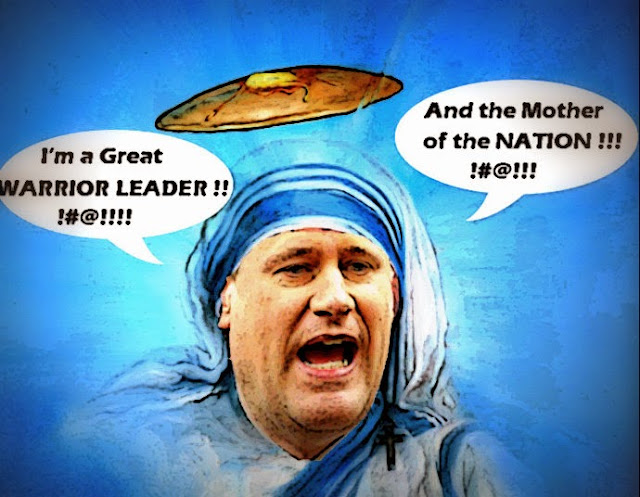 Prime Minister Stephen Harper has told the United Nations General Assembly that saving the lives of the world's most vulnerable mothers and their children is not only a global priority, but an issue "closest to his heart."

And that's when after practically falling off the couch laughing, I started hearing voices in my head eh?

Because it should be clear by now that everything the Con regime does is aimed at winning votes back home, and is more image than reality.

He's leading us stealthily to war, while posing as a kinder gentler leader. He's relentlessly pursuing the ethnic vote. He's announced that the deficit will be conquered sooner than expected.

So he can bribe voters with tax cuts.

Prime Minister Stephen Harper’s government defended Thursday in the House of Commons the tens of millions of dollars it’s spending on media monitoring when there are more than 3,300 communications staff working in government.

To fine tune his message, and sniff for wedge issues. Or an excuse to call an election.

And if he can go early he will to avoid this nightmare... 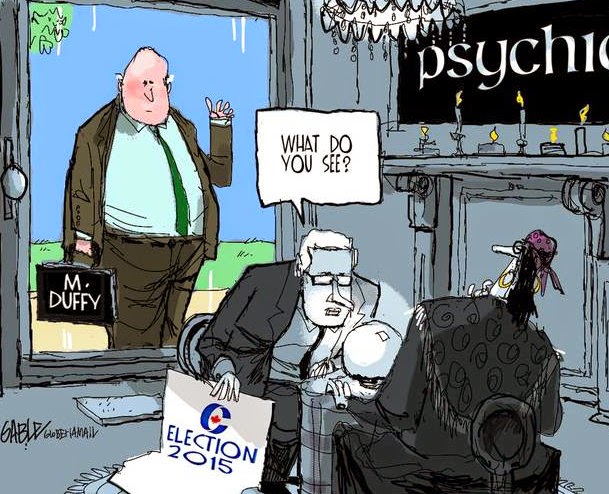 Of course I realize that if I'm wrong I'll be compared to the boy who cried wolf.

But the way I see it better safe than sorry eh?

The wolf is in full campaign mode.

And no beast is more dangerous than one in sheep's clothing... 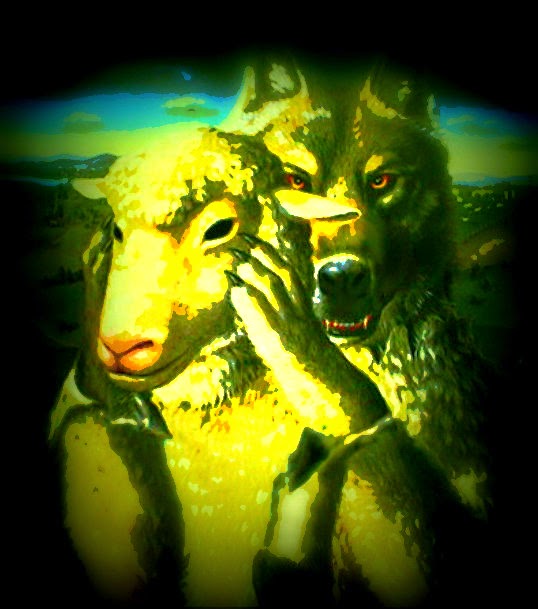 WILL HE STAY OR WILL HE GO

He will stay. He's not giving up all that fun and fame he is having.

Now that we have harper saying women and children are closested to his heart lets start a search for it because right now we still have 1,200 missing and murdered /First Nations women and harper isn't doing anything about it. He isn't even providing additional funds for police forces to find out who is doing the murdering. Having a National Enquiry is simply out of the question for him, so lets see what did he say again.

The guy loves the attention. He wants to get to play with the big boys, and sent them an invitation to ask if he could. Of course, he doesn't have the equipment. He just cut the military budget again. He promised all sorts of ships to be built for the Canadian Navy, some right here in B..C. Has it happened? Nope. The shipyards haven't even been given the go ahead to order the steel, from China.

Some one needs to tell stevie that to play football you need a pair of cleats.

hi anon...at this point I don't know and I suspect he doesn't either. It all depends on whether he is able to boost his polls in the next few months. So what happens in the run-up to Christmas is going to be absolutely critical....

hi e.a.f....you may be right, except that Harper doesn't seem as interested in the job as he once did. Like many long-tern Prime Ministers only the foreign stuff can keep them from getting bored. So although I think he will seek any opportunity to try to stay on, I would not be surprised if he did resign in the new year...

Its not the foreign stuff its the travel. its like a perpetual vacation and you don't have to stay home and deal with the leaky roof and the weeds in the lawn or the kids. No my money says he stays, now I've been known to be wrong, but harper in my opinion is not going anywhere unless he is carried out bodily by either his party or the public.

Because if he goes, where does he go? What will he do. Its not like he was a lawyer and can go to some high end legal firm and play at being a "lawyer". He ran a two bit thunk tank and that would be like going back to the farm and you know the line they had after WW I, how are we going to keep them down on the farm after they've seen gay Parie.

Its no different now. To the best of my knowledge he didn't come into politics with a lot of money in the bank, so how is he going to sustain his current life style or that which his wife and kids enjoy. Now it maybe the family has come into wealth since their arrival in Ottawa, but who knows so the question is" how will he make a "living".