Stephen Harper and the Return of Parliament 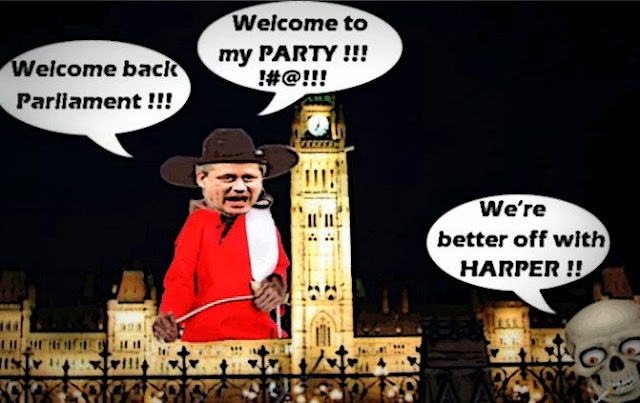 After a long summer break Parliament returns on Monday, and all the political parties are revving up their engines.

A splashy, campaign-style launch for the government's fall agenda, a surprise tax cut for small business owners, a brand new NDP battle cry and a prime-time speech from Justin Trudeau: welcome to the 2015 election season.

With Parliament poised to resume on Monday, all three main political parties are clearly revving their political engines on the road to the next vote, currently scheduled to take place some 12 months from now.

For it will mark the official beginning of the next election campaign and Stephen Harper couldn't make that clearer by turning the occasion into a party.

Typically, the Tories are content to hold a modest news conference or have Stephen Harper address caucus members on Parliament Hill. This time, they've upped the ante, inviting supporters to an Ottawa convention centre Monday where the prime minister will lay out his fall agenda.

For he is pulling out all the stops. He has started to implement his plan to try to buy the support of some Canadians.

The invite was followed by what's likely to be the first in a string of tax cuts tossed out by the Tories as pre-election gifts on the road to the ballot box next year. The cuts to employment insurance premiums for small business announced Thursday are the kind of targeted tax breaks the Tories adore, allowing them to woo boutique constituencies without breaking the bank.

He is pushing ahead with his plan to nail down the ethnic vote.

He is preparing to rush his flawed crime bills through the House. While his stooge Tony Clement sets the stage for a massive clash with the public service unions. 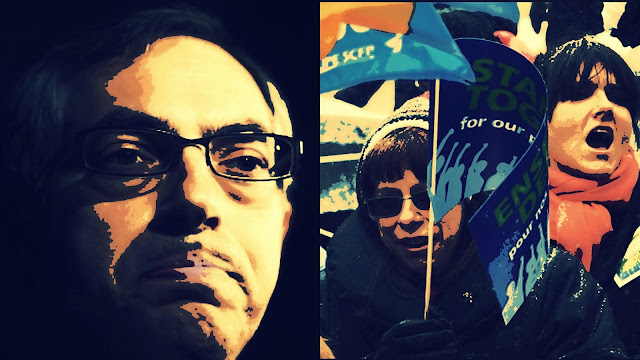 So I'm glad the Liberals and the NDP are mobilizing to meet the challenge, because it's clear to me that we are heading for an early election.

And that the result will depend on whether they are able to dismantle the latest Con slogan "We're Better Off With Harper."

Which as Andrew Coyne suggests, will probably come down to whether Canadians believe that Harper is doing a good job of managing the economy.

The evidence is that it is the short-term state of the economy, the thing over which governments have the least control, that decides elections. Whatever personal contributions Pierre Trudeau or Brian Mulroney might have made to the odium in which they were held by the time each left office, it was the recessions that beset the country in their final years that dictated their departures — and doomed their successors.

And will be harder to disabuse when the Cons are preparing to bribe the population. 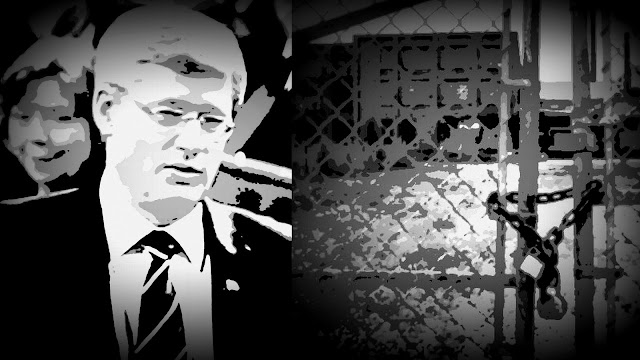 The problem this presents for the government is twofold. One, not only is the economy growing rather more slowly than has been the norm historically — employment, in particular, has all but stalled — but this slow growth is likely to continue: in part owing to the lingering aftershocks of the financial crisis, in part to the population aging, as more people leave the labour force than enter it.

But of course the challenge will be communicating all of this in a simple but powerful message. One that makes it clear that we are NOT better off with Harper, as I started off doing last night with this video...

For if the opposition parties can't do that, as well as motivate Canadians with a brighter more exciting vision of the future, Harper could still get away with it.

And the good news. That shouldn't be too hard. Not with everything that monster and his ghastly regime have done to this country.

As for Harper's big Parliament returns party, well I think we can ruin that too eh?

By making sure that nobody misses the start of the Mike Duffy trial which also begins on Monday.

And by humming along with Duffy in this old blast from the past...

Because that is of course yet another reason to get rid of the Con regime.

Yup. The Battle for Canada begins on Monday.

And we must be smarter and more aggressive than ever before. And we will be.

For failure is not an option...

Spring Election will NOT Surprise me! I know I'm Not voting for the CONS!

We are better off without Harper! Truth in advertising, an election law the Cons will never follow.

I guess people don't understand that Harper signed his, FIPA deal with Communist China? That means Communist China will take Canada over for a, minimum of 31 years. Harper's Omni-Bull-S-Bill gives Communist China the right to sue anyone, that tries to block China's huge inroads into Canada. China can even sue Canada in the International courts and win. Wealthy Chinese are suing Harper to get into Canada because, Harper said they could. People in this neck of the woods, signed the petition against, Harper's underhanded deals with China.

Most of us know, we will never get Communist China out of our country. China polluted much of their farmland and 40% of their water. Dead pigs come floating down China's rivers. Now the Chinese will turn Canada into a polluted wasteland too.

Do people even understand why, Harper doesn't need a Canadian Military? Harper is giving Communist China a massive resource project, in our High Arctic. Harper signed a deal with, the Red Communist China Army. Harper and China can now, force the Enbridge pipeline through, with the Red Army to guard that as well.

China is calling shots, in the BC Teachers strike as well. China owns most of BC, so I guess that gives China the right to do so.

People jumped down my neck many times when, I said I wanted my Engineer son to apply overseas. This is exactly why? We were even warned? If Harper cheats his majority, we are going to kiss Canada good-bye. Communist China has even got into, our Canadian Universities. Jason Kenny and Harper are bringing thousands of foreigners over, who aren't even ticketed nor certified. Perhaps now, my son will listen to me and apply overseas. The Chinese Engineers don't have our technology but, they work cheap and endanger Canadian lives. However, that doesn't matter to the dictator Harper.

I also noticed? The opposition have not even lifted a finger to stop Harper from, giving Canada to Communist China. The only politician that warned Canadians, is Elizabeth May.

Simon, I read that Harper and his cons agreed to the China/Canada free trade agreement and announced it late Friday afternoon???????
If that is the case it really doesn't matter what the state of the Canadian economy is because China owns us now for the next 31 yrs. We have lost our sovereignty. The Chinese workers can start arriving asap and Canadians can look forward to unemployment along with lower wages for those still working.

Under the free trade agreements companies who win contracts in Canada can bring in their own workers, if they have the "special" qualifications the company requires. Its the company who decides what the special qualifications are and immigration can't stop them from coming in, even if they have a criminal record. This will be harper and his herd's going away present to Canada. It doesn't matter then, who the P.M. is, China will be running the show. when this agreement is "official" it might be best if /Quebec seperated, so they have sovereignty over their own province. I for one would consider moving there then.

Harper is already in election mode:

And he [Harper] announced that next week the new Ukrainian President Petro Poroshenko will make an official state visit to Canada. Canadian election observers will also be on hand in Ukraine during the October parliamentary vote.

Sadly, there was ZERO mention of the China/Canada free trade agreement on national network broadcasts.

Harper sell out to China will be locked in
http://elizabethmaymp.ca/news/publications/press-releases/2014/09/12/harper-sell-out-to-china-will-be-locked-in-elizabeth-may/

Conservatives give China control over investments in Canada
http://www.ndp.ca/news/conservatives-give-china-control-over-investments-canada

Today, out of the blue, the Harper Conservatives ratified the China-Canada FIPA deal, a move that threatens to lock our democracy into a binding investors’ deal for at least 31 years.

By dumping the news on a Friday afternoon, he showed us that he knows this decision is politically toxic - FIPA is deeply unpopular with people across the country, including his own MPs, Conservative donors, and the swing voters he needs in the 2015 election.

While we work with partners to review the legal options, we want to make sure key voters know the Harper Conservatives ratified FIPA behind our backs, and set the stage to make them pay at the ballot box in the next election. Canadians deserve to know, and if Harper won’t tell them, we will.

D For Democracy - Spirit of the West
http://www.youtube.com/watch?v=R0cP4uslpLA

A recurring theme throughout the album is disaffection with the government of then-Prime Minister Brian Mulroney. "D for Democracy", "Pulling Lame" and "Far Too Canadian" are all anti-Mulroney songs, reflecting the widespread popular opposition to Mulroney among the Canadian public which led to the 1992 defeat of the Charlottetown Accord and the Progressive Conservative decimation in the Canadian federal election, 1993. However, "D for Democracy" is not about Mulroney alone, as the song also touches on other contemporaneous stories of political malfeasance, such as the drug controversy surrounding Washington, DC mayor Marion Barry.

You with the jaundiced eyes,
Drunk on your own reflection
Propped up with desks and flags,
Eight chairs short of perfection
Your lines drawn here, there and everywhere
None of your own volition
Unrecognized your paste and your shadow
Stripped of all your definition

hi anon...I haven't the slightest doubt the Cons are going for an early election. The only question in my mind is whether it will be next Spring or even earlier...

hi anon....yes it is a ridiculous slogan isn't it? In fact I would go even further and call it absolutely obscene. If there was any justice it would be pulled off the air, like the ad they made about the Porky Action Program and a program that didn't even exist....

hi anon...I'm going to have to read up on this new trade deal with China. But from what I've read so far it looks like another sellout. Surprise, surprise...

hi anon...I have to say that choosing between herpes and Harper would be a REALLY hard choice.... ;)

I can imagine some other fundraisers Harper is planning or will be attending in upcoming months to show he's already in election mode:

United for the Abolition of Canadian Charities Gala fundraiser

United for the Elimination of the CBC Gala fundraiser

United for the Establishment of the Harper Youth Gala fundraiser

United for the Abolition of the Supreme Court Gala fundraiser