Why Justin Trudeau is Right to Boycott Sun News 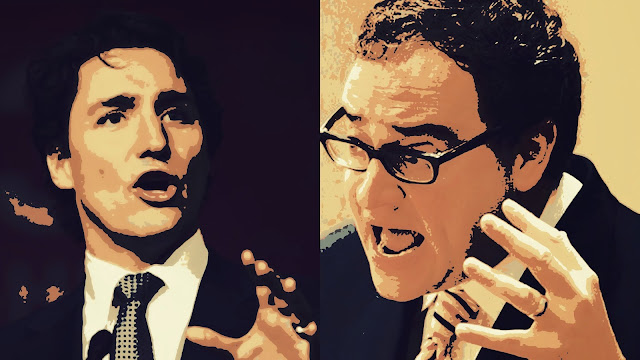 I must admit when I first saw what Ezra Levant had said about Justin Trudeau's parents, I wondered whether Justin would challenge him to a duel.

So he could do to him what he did to Patrick Brazeau... 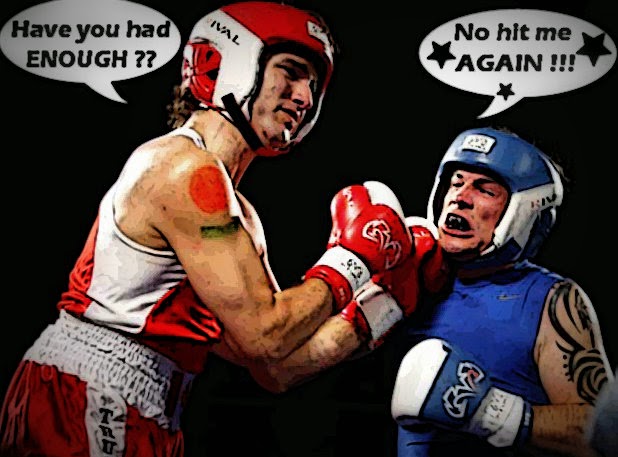 Because Levant was there that night covering the fight live for Sun News with his reptilian colleague Brian Lilley... 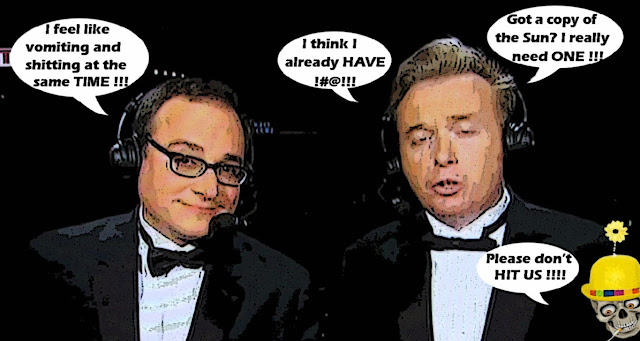 And I've never seen those two Con stooges look so bitterly disappointed after it was over. It was HILARIOUS.

But what really disappoints ME is the way so many of the useless stooges in the MSM are saying that Trudeau is wrong to boycott Sun News.

Federal Liberal Leader Justin Trudeau's decision to boycott Sun Media over an "offensive" rant by one of its TV personalities is short-sighted, experts say, and may have Canadians questioning his open government stance.

Or claiming that it says something about the way he might govern the country.

When in fact, as Bruce Anderson writes, Justin's decision to boycott Sun News until he gets an apology is entirely reasonable. 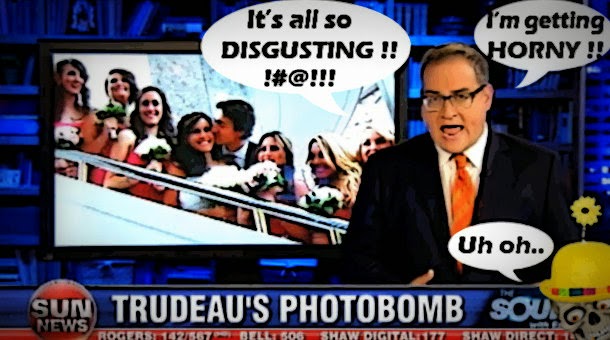 It was a scummy piece of political pornography, and what's really troubling is that so many pundits are spending so much time criticizing Trudeau instead of Levant.

It’s unsettling how much time has been spent talking about the wisdom of Mr. Trudeau’s response than the integrity of Mr. Levant’s attack. What Mr. Levant did is an embarrassment to journalists, and to those in conservative politics that he is normally aligned with.

From my standpoint, Mr. Trudeau took a reasonable position, holding the publisher to account and using what leverage he can muster. His goal seems not to end or disrupt or manipulate media relations in a permanent or pervasive way, but to say this isn’t normal and it shouldn’t be treated as such.

When what that sleazy bully did was not normal, Sun News is not a normal news organization, it's practically a propaganda organ of the Con regime.

It appeals to the scummiest kind of Canadians, who can't take their heads out of their toilets. 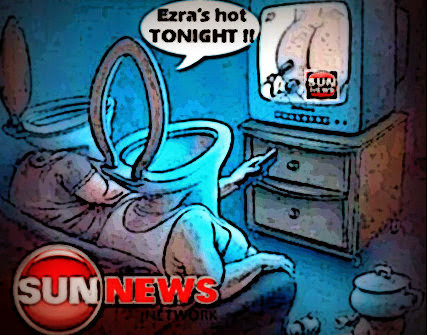 And since neither the owner of Sun News, the separatist millionaire Pierre-Karl Peladeau, nor any of his paid editorialists, have yet to apologize for the disgusting comments of their sleazy hate monger.

They should be boycotted until they clean up their act, because bullies simply cannot be allowed to get away with it.

When people in politics get attacked like this, one choice is to shrug it off and say, hey, get a thicker skin, roll with the punches, accept that these are the rules of the road. Then years later, we can feel dismay at the sorry tone of our civic life, or wonder why few good people are willing to run for office.

Lest they drag us and our democracy into the sewer they inhabit.

And Levant really does need to be quarantined, along with all those at Sun News who might be exposed to him.

Because as Heather Mallick points out, he really is a social DISEASE. 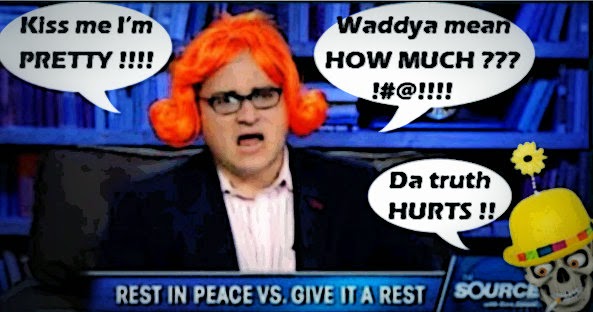 What is Ezra Levant? Is it antibiotic-resistant? Can it be cured, and if not, will topical steroids take the swelling down? Should I be asking my doctor for anti-inflammatory medication or will that irritate my stomach lining?

He is no journalist.

Ottawa journalists went all “esprit de press corps” and fell for the gag that Levant was a journalist to begin with. Of course he is not, he is simply Sun News Network’s performing flea.

He's just a bad joke like Sun News itself.

No one watches that channel (I wish it would stop asking me to appear). As the Globe and Mail wrote in 2013 about a CRTC hearing, “Sun believes most Canadians don’t know it exists, and it has the market research and ratings to prove it.”

And the only way to cure this disease is for Quebecor to fire Levant's ass. 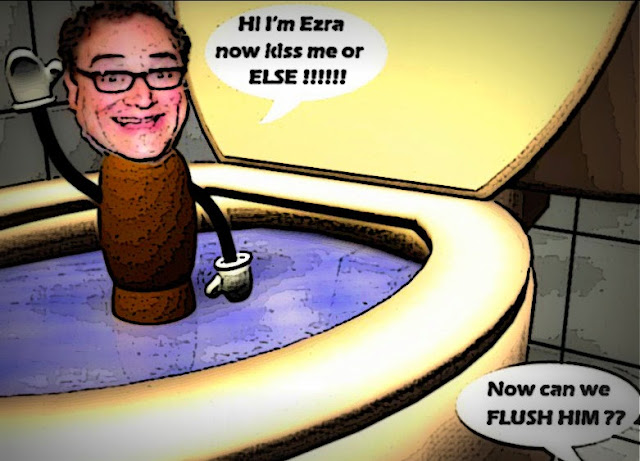 The sooner the better...

By the logic of Trudeau's critics here, we all should have backed-off in our condemnation of Levant's racist rant about the Roma people. He was only exercising his right to free speech and putting out his wares in the marketplace of ideas after all.

I think people are more concerned about real journalists like David Akins, who doesn't deserve to be punished for a dip shit like Ezra.

I remember watching an NDP convention which David Akins was covering on Sun News.

its stunning to me too, that the journalists all run to his defense, like he has a right to free speech. do these guys all hail from america. Our laws against hate crimes, and defamation and slander differ. Anyhow the whole idea that anyone watching that segment thinks it equates to news, reporting or real journalism, needs to go back to school.
I find it repulsive and of course Trudeau should stop talking to and about sun news. just like the international terrorists are looking for media attn, so is sunnews and they go about it the most disgusting and vile way. Appealing to the lowest common denominator and they love that all the media organizations are talking about this.
Can you imagine anyone doing something similar to Harper, and getting a free pass from the cons, No....I cant either.

I can't believe, people actually read the Sun? I tried only once and couldn't even get through one paragraph. The Sun reminds me of, Goebbels propaganda machine.

"Real" journalist David Akins can go work at a "real" new organization in order for me to develop any concern for his employment well being.

But if Justin Trudeau MUST lower himself to deny access as media revenge, here’s some free advice.

Just do it. Don’t announce it.

Pot Not a Big Deal?

Charles McVety: "It [smoking pot] absolutely is a big deal because it causes a lot of damage, more damage today than it once did because it was used much less. The statistics show the use of it is growing and marijuana is a carcinogen, and it brings on cancer when you ingest this into your lungs. It causes all kinds of psychotic issues, paranoia. Even some psychotic breakdowns. I mean even the mother of Justin Trudeau, the chief propagator of marijuana in this country--legalization of such--his own mother confessed that she had psychotic problems because of marijuana."

*
Does smoking cannabis cause cancer?
http://www.cancerresearchuk.org/about-cancer/cancers-in-general/cancer-questions/does-smoking-cannabis-cause-cancer

hi thwap...exactly, they would let Levant get away with that filthy stuff, and as I pointed out in my post drag us all further into the gutter. I don't buy it for a minute. Fox News North is a crappy Con propaganda organ, it has been recruited into the Great War on Justin Trudeau, and it deserves to be treated with contempt...

hi Gyor...I'm afraid I agree with Omar. Akin is a decent journalist, but he sold his soul to Quebecor, and he has to live with the consequences. I'm also sure sure that like other Sun "reporters" he will get a chance to ask questions at news conferences. So the only thing Sun News will be missing out on is having Trudeau in studio or sitting for one on one interviews. A small price to pay for their disgusting behaviour...

hi deb...well their is a pack mentality in Ottawa. The Press Gallery moves like a shoal of fish in the sea. And I suppose it's only natural. But I think the should look at it from the politician's view not just their own. The Liberals have asked for an apology and until they get one they should boycott Sun News because they deserve it. The Levant slur was not a political criticism, it was a vulgar smear, and Sun News should not be allowed to drag us into the sewer....

hi anon...unfortunately some people do read that rag, I see the evidence on the subway. I myself would rather read a supermarket flyer. It's always been a ghastly paper, at one point it was a virtual font of homophobia. And now it's practically a Con organ. I am definitely going to have to get up the strength to watch Sun TV for a while to see if the Cons are helping to keep them afloat with their porky ads. But the good news is they aren't obviously running enough because from what I hear the whole Sun newspaper chain is starting to look like the Titanic...

hi David...I suppose he could have done it that way. But I think that Sun News needs to be publicly criticized, so I think what Trudeau did was correct. The incident is so vulgar it does not deserve to be treated any other way...

hi David...thanks for that. I really needed to know what Chuckles McVety thinks about smoking marijuana. I think he should stick to preaching about the Battle of Gog and Magog it's far more bizarre and interesting. Why is that loser still around ????

CTV's Robert Fife said today on CTV Question Period that he predicts the Sun News Network will issue an apology to Trudeau for Levant's comments.

Was there not a time of honour among journalists when politicians' families were not slandered? It just wasn't done.Of course, that was before most of the journos were corporate controlled.

Justine is right, in my opinion.