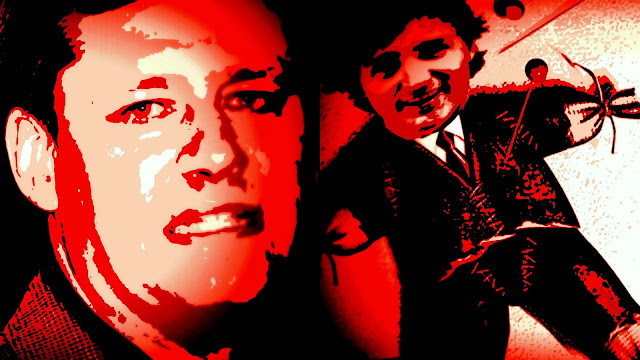 Ever since Justin Trudeau was elected Liberal leader, Stephen Harper has based his entire strategy on trying to destroy him.

But a new Abacus poll is out, and it's not good news for Great Ugly Leader.

For it shows that his depraved attempts to destroy Justin just aren't working.

And that if he hopes to win the next election, and avoid humiliation, he's going to have to change that strategy.

Is Justin Trudeau really in over his head? The Conservatives would have you believe he is. “It’s clear he’s incapable of leading a G7 nation through uncertain times,” they claim. The problem is that only one in four Canadians agree, according to a new poll by Abacus Data. Another 28% feel “maybe a bit, but he could learn on the job,” while 23% are “unsure — we need to see more of him.”

“The question for Conservative strategists is whether to persist in trying to make the ballot question Mr. Trudeau’s competency or abandon it in favour of something else. Thus far the evidence suggests it has not worked,” concluded Abacus’ Bruce Anderson and David Coletto.

Because as John Ivison suggests the real problem for the Cons is not Justin Trudeau. 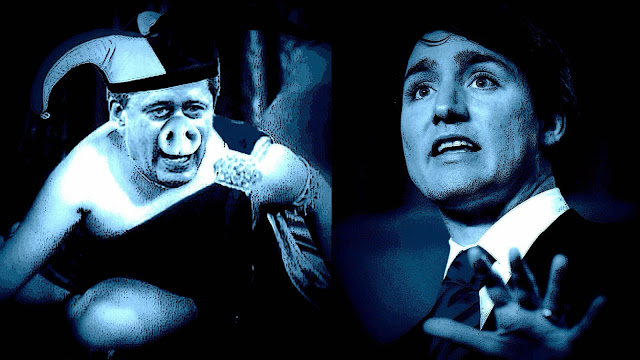 My sense is that the biggest problem the Conservatives have is not the failure to date of their attacks on the leader of the third party, it’s the slipping popularity of their leader. While Canadians may cut Mr. Trudeau some slack, the Abacus polls suggest they have run out of patience with Mr. Harper’s idiosyncrasies.

The Abacus poll suggested that while 43% of voters believe the country is going in the right direction, and 33% approve of the job the government is doing, only 19% say the Conservatives deserve re-election — an apparent disconnect that Mr. Anderson called, in understated fashion, “an enthusiasm shortage.”

Which is of course what I have been saying for months. Harper has been in power for too long. Canadians are sick and tired of him.

And the passage of time cannot heal that problem, it can only make it WORSE.

No one expects him to pitch up in the boxing ring or arrive at work on a skateboard, as the Liberal leader once did.

But if the Prime Minister is to stave off terminal fatigue with his style of executive democracy, one suspects he will have to charm Canadians, like a dog on its hind legs.

Harper on his hind legs begging for a bone... 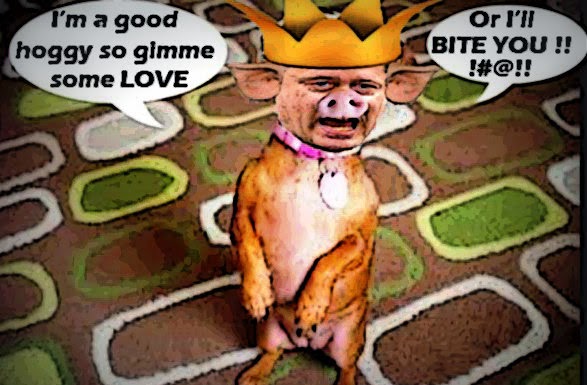 Or begging for some LOVING.

For should that bestial act happen, these questions must surely be asked:

How high can he jump?

And how well can he DANCE?

And my guess is not as good as that chihuahua.

For Canadians are sick of his ghastly act.

He is a pathetic and desperate creature.

Hi Simon I think you cant overcome just how Canadian Ford is and how American Harper has become. I am working on a blog comparing two scions, Justin and Bob.

I can only assume that the so-called 43% of the people they polled (and we all know just how accurate these polls are, right those of you with a 3-digit I.Q.?) are probably on the way out of some christo-fascist hate-in where they are given free poutine to cheer and clap at the appropriate times, kind of like a seal barking for a fish.
With the Canadian Vets mounting an offensive against the CON huns, I think that number is now and will be in the very forseeable future in reality a hell of a lot lower than 43% and it sure as hell didn't include any First Nations' Women's opinions on how things are going for them. They don't ask the opinions of people affected negatively by the harpie crime cabal's actions. That would "slant" the data too much. Get it?

I say again and I say again, lets humiliate Harper and his attempt to be nominated for a Nobel prize. BTW is the CRA auditing Bani Birth?

Like your blog, but the pig thing must drive harper nuts. Has he tried to intimidate you in any way because of it? Just for my own knowledge mind you in case I want to walk around in a costume.

hi Steve....this whole country has become Americanized and replaced its sense of collective values and community with the cult of the individual, and in its latest phase the cult of celebrity. I live for the hope that we can return to the values that made us decent and Canadian before it's too late...

hi anon....yes it's true, one must be sceptical about the accuracy of polls these days, since so many have proved to be so wrong. However, the trend is definitely favourable, history shows that all Canadian Prime Ministers eventually run out of time. So I doubt Harper will buck the trend, especially with his ugly, grating personality. the only thing that can save him is if he manages to engineer some kind of emergency, and enough cowardly Canadians are stampeded like sheep. Failing that, Harper's time is almost up, and I would not be surprised if he resigns early in 2015. Although it is also possible that he could call an election around the same time to try to head off the inevitable. We live in dangerous times but I remain optimistic that better times are coming...

hi Steve....yes as I've said before everybody should sign that petition. I'm sure the Nobel Committee will reject Harper's nomination without any outside help, but the more Canadians who sign it the better we will look...

hi greg....I doubt that Stephen Harper has ever read a single line I have written, or seen any of my piggy graphics. But that's OK because I intend them to be more of an attack on the nature of his regime, than a personal attack on his porky leadership. And they do drive his ghastly minions crazy. I receive almost three times as many negative comments (most of them unfit to print) than I do positive ones, or messages of support. They include hundreds of veiled or not so veiled death threats, and are clearly intended to try to intimidate me or make me tone down my criticism. But of course don't intimidate me, because I have been fighting bullies since I was fourteen, I wasn't scared of them then, and I'm not scared of them now. I write to encourage progressives and try to cheer them up, and it some people find my caricatures too extreme it's only because they are hopelessly provincial and don't see how cartoonists in a place like Britain criticize or lampoon their governments. To make matters worse I am also targeted by some of the old men in our own blogosphere who are as eager as the Cons to destroy me. Including one in particular who sends me filthy notes, and doesn't realize that I know from whom they come. But as I said, none of this bothers me. I feel sure that in time I will be vindicated, and that when people look back at this shameful episode in Canadian history, I will in my humble way be able to hold my head high.
I have never advocated violence and I never will. even though a few years ago, some crazy religious fanatic came looking for me with a knife. Maybe one day they'll get lucky. But my advice to you is don't be afraid of anything. Stand up for our Canadian values, and don't let anybody intimidate you. We live in a cowed and broken country, but we can fix it and make it beautiful again...

Good for you Simon but, for Heaven sake stay safe. To me Harper is unbalanced and I wonder at his cabal that support him.

Harper is making a horrendous mess of this country. He is so desperate, he had a secret meeting with Communist China. Harper has handed over much of our resources and resource jobs to China. Harper likely has handed more to China, to buy ethnic votes. Harper and Premier Clark, handed the building of the LNG plant near Prince Rupert to China. And that is only the tip of the needle. China is also going to sue Harper to get into Canada, likely into BC. Harper's Omni-Bull-S-Bill permits China to sue Canada if, anyone tries to block China's way into Canada. There is also Harper's FIPA deal with China. Many of us in this neck of the wood, signed the petition against, Harper's deals with China. We see China menacing other countries around the globe. Harper jumps down Putin's neck for Russia annexing the Crimea. Harper says nothing regarding China doing the same damned thing.

Whether Canada can survive Harper or not, worries me. They don't call Harper, vindictive little Stevie for nothing. Harper hates BC. Harper also gave Poland, BC's ship building contract.

I have no clue as to why, that evil monster is still in office?

Harper is trying to "destroy" Little Pierre?
Nah..... Justin has 12 more months of foot in mouth disease to destroy himself.

Simon, it is remarks like Anon 7:23 that should be bared from posting anything on your blog site. Send him off to his CON site where he can spew all the venom and lies his people are so fond of. Not much for IQ's with that bunch. Brainwashed beyond repairable. Have a great day Simon and keep on blogging for all of us who are plain fed up of the Cons and their parrot followers.

hi anon...you just don't get it do you? Do you read polls or do you just follow your depraved leader and believe that the truth is what you sat it is? It's your precious harper who is destroying himself, and I wouldn't bet on him being around 12 months from now....

hi anon...you're right maybe I am too lenient with those Con trolls. I did once want to engage decent Cons and convince them of their error of their ways. But I will take your suggestion, and delete even more of them upon arrival...

Ummmm actually I cant stand Harper but I think Justin Trudeau is a member of the "Lucky Sperm Club" and if it wasn't for his father , he'd just be another annoying drama teacher( his previous job an another life) pontificating Shakespeare in the pub after work ( I had the misfortune to be stuck in an Irish pub in Vancouver when "Little T" and his buttlicking entourage ...... plunked themselves down next to our table.........ugh).
Lets just say . There isn't a mirror Justin has ever missed when out and walking about.
He is an intellectual lightweight who couldn't hold a candle to his fathers farts and if you think he's Canada's Messiah your even more delusional than I previously envisioned.

Hi Simon......My suggestion would be to allow the CON trolls to remain. If only to motivate countering responses from people who cannot believe the narrow minded, partisan-based spew. It has clearly been their MO in the past two elections to use personal attack campaigns. They have even received praise and congratulations from prominent news organizations for successful execution of this strategy. (As if this tactic is perfectly acceptable with the majority of Canadians).........Well its old, and the regime is old. As long as the turn out is reasonable, the government will change shape in the next election. Keep up the great work Simon.

hi anon...I see your point, and maybe you're right. It is good to let the Cons show what kind of people they are. But I want to make sure that the comment space remains a safe place for decent people to offer up their opinions. So while I may keep my finger off the delete button, I will keep it within reach, and I won't hesitate to press it if the spew is too vile...