Steve Nickelback and the Rebranding of Stephen Harper 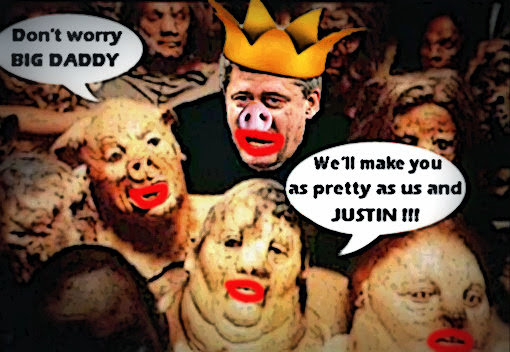 Well as you know the young fanatics in the PMO are desperately trying to improve  Stephen Harper's image. Frantically trying to put a fresh coat of lipstick on it, before the next election campaign.

But it's all going horribly wrong.

Trying to portray Harper as a Great Strong Leader, who is almost as fresh and just as pretty as Justin Trudeau, AND a Mr Nice Guy, just isn't working eh?

So now a former PMO member has come up with the wildest and most desperate idea  yet. 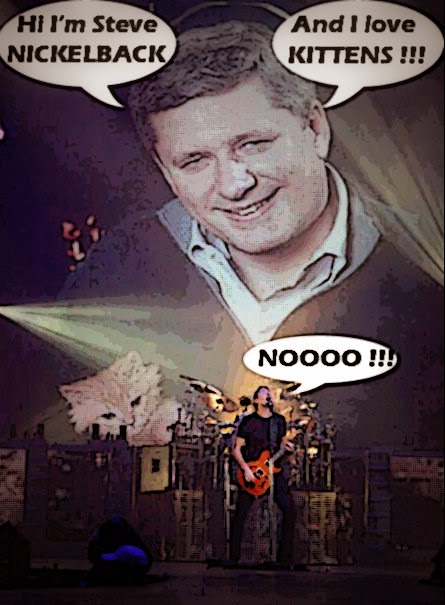 Right now, Liberal Leader Justin Trudeau is the hot new indie band, the one the press can't get enough of and the people seem to like, even though they haven't actually heard him because he has yet to put out a record. Meanwhile, Stephen Harper is Nickelback.

It's true you'll find no shortage of people who say Nickelback sucks. But no one can deny their commercial success, just as fair-minded observers can't deny Harper's electoral success.

And all I can say is WHY?

Why would Andrew MacDougall dredge up the sordid past, and do that poor band even MORE damage? 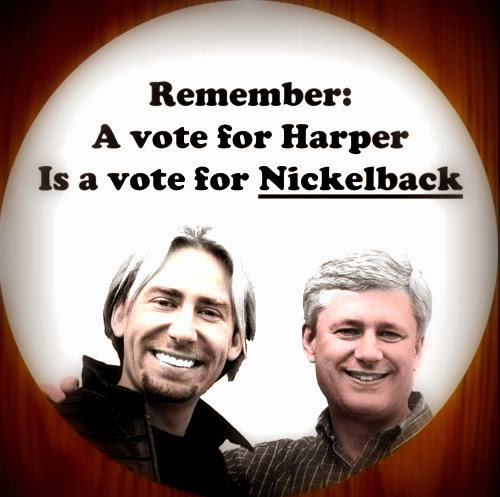 Or lower it even further in our estimation. If that's possible.

Or remind us that Nickelback started off as a band called The Village Idiots.

I mean doesn't MacDougall realize that Chad Kroeger has FEELINGS ???

And that him and the other band members are probably still deeply traumatized by the way they allowed Stephen Harper to use them so shamelessly,

In the vain hope that some of his "greatness" would rub off on them.

And are probably still trying as hard as they can to forget that unfortunate episode.

Who was once suckered into a photo-op in Harper's living room. 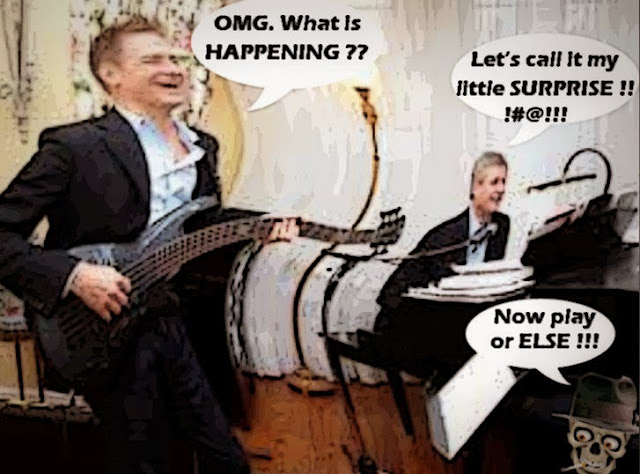 And later confessed he found the experience deeply disturbing.

The next thing you know, we’re playing music in his living room and I realize it’s a photo op. The only publicity the story got is that Bryan Adams got to play with Stephen Harper.”

“More like Stephen Harper got to play with Bryan Adams,” I suggest. He shrugs. “It was quite disturbing.”

And who can blame him eh? How would you like Stephen Harper playing with YOU?

But what really blows my mind is that MacDougall seems to have forgotten that reminding us of Great Ugly Leader's musical proclivities, can only remind us of his regular band Herringbone.

And of this bone in his throat or his posterior. 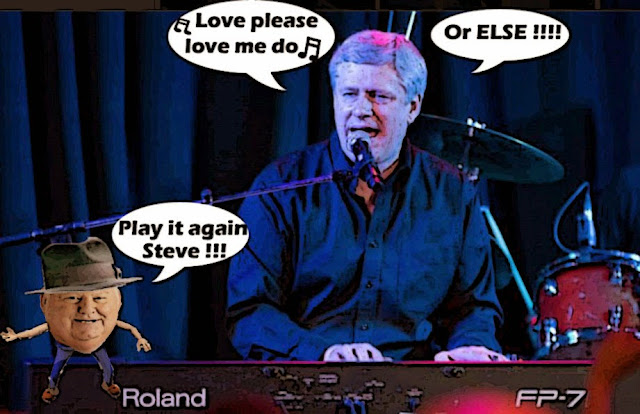 For let's not forget that he could soon be singing, under oath, at Mike Duffy's TRIAL

Which just might be his last performance, until he plays Johnny Cash in the Big House.

But of course that's the problem eh?

He may be desperate, he may want Canadians to love him so much he can taste them in his mouth when he grinds his teeth at night.

He may hit the stage again... 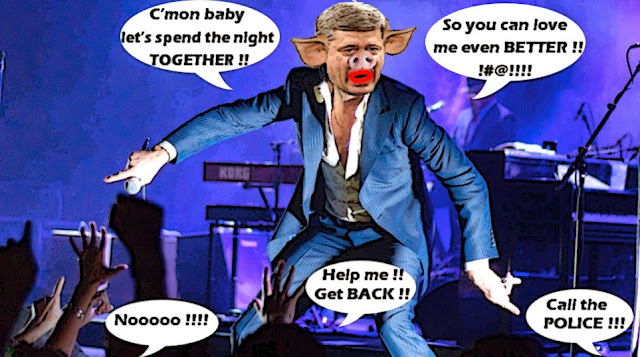 But it just won't work.

The fanatics in the PMO will never change his ghastly image no matter how much mascara they cake on him, or how much lipstick they smear on his cold cruel lips.

Because as I pointed out in this little video I made, before he fooled Canadians into giving him his precious majority.

His mask fell off long ago...

Sadly, not enough Canadians saw the real Stephen Harper in time to stop him from winning that election, raping our values, and trying to kill our country.

The progressive parties were far too soft on him.

But hopefully this time things will be different. We will brand him instead of the other way around.

The monster will be exposed. His ghastly act will be booed off the stage.

And he will get the HOOK...

.. who at CBC is letting Andrew MacDougall bray from the cheap seats in Ol England
An op ed that politics or governance in Canada is just pop music election polls
Not sure his weasel brand of propaganda is better than Lord Black or Tom Flanagan

but if Harper needs a name for the sick music in his head, how about
The Dead Caribou, Stevie Ray & the Pigs in the Trough, Raptured ProRogues
Parliamentary Vermin, The Virgin Dirtbags .. or Wiggy th Poop & the Dilbit Pimps

hi salamander....good question. City Prole wrote a good post on that subject that you can read here:

But the way I see it with enemies like MacDougall who needs friends?

And yes, I'll go with Wiggy the Poop and the Dilbit Pimps...;)

Steve is Nickelback and that will give him the elevator vote. Its a serious block because they have elevators everywhere. But for Harper its is all cognitive dissonance because you find elevators mostly in URBAN areas.
Justin is Janes Addiction. Watch out for Sergio. Thomas will run as Deadmouse5.

Thanks for the link, Simon...I was totally shocked when Bryan Adams seemed to endorse Harper, but Chad Kroeger? Nope...after all he's a Surrey guy, and that suburb of Vancouver is a place where the Cons hold sway, and the running jokes about it's inhabitants provide Vancouverites with a lot of deeply disturbing laughs...not PC at all...

Harper is pure unadulterated evil and he is going to use, every rotten underhanded tactic in the book, to cheat this next election too. Why people can't see through that monster, baffles me? Harper is an out and out flaming fascist dictator. I hope people support our Veterans tour of Canada, who are protesting Harper's rotten behavior towards them. Those who can't be there, call or e-mail your Royal Canadian Legions and give them your support.

I stumbled onto something really weird. It was said, to be very careful of your words. I read, Harper didn't have an invite for a meeting in Wales? What the big deal is, I have no clue?

In the early morning on the day that the conference was convened, CBCNN reported that Obama had invited selected leaders from among the NATO members to a special meeting at which he intended to discuss strategies concerning the specific challenges the alliance is facing. The report noted that those invited included certain European members and that Harper had not been invited. It also noted that reaction from the PMO to the exclusion had suggested that it was unimportant since the PM would be contributing to deliberations through other means.

I have read several references to this exclusion, such as this one by Anonymous, in various “comments” sections but, other than in the original CBC broadcast, have neither seen nor heard reference to it by any media source.

Thanks for the laughs Simon. That last photoshop had me and my wife chuckling all morning. I also liked your video. So many of the other blogs are so depressing. We were too soft on Harper. I just hope we have learned our lesson. Cheers.

hi mizdarlin...you're welcome. I was intending to include your post in the body of mine, but I had to change a shot in that old video and I forgot. But luckily salamander reminded me because it is a good question why the CBC is printing such nonsense. I have to admit that I once attended a Nickelback concert and quite enjoyed it. Nooooooo!!! But I can't imagine how any artists in this country could support the Cons. As for Bryan Adams, I know he won't support Harper because he recently criticized him publicly over his lack of support for Gaza...

hi anon...I'm glad I was able to give you a morning laugh. Harperland at the end of summer can be a pretty grim place. Although I don't find the other progressive blogs depressing. As long as they are fighting the Cons I'm happy. As for that video, I am a bit reluctant to run my old ones, because I was just learning how to edit, and I'm much better at it now. But at least that one makes it clear how I felt about the Cons at the time, and I too am hoping that this time there will be many more of them, and that we give the Cons a taste of their own medicine...

That's not being fair to Nickelback. Nickelback is awful, but they never had one of their band members arrested for sex crimes with a minor, like Harper's band did.

I like Wiggy the Poop & the Dilbit Pimps salamander.
Has a great ring to it!