Indiana Harper and the Doomed Return To Parliament 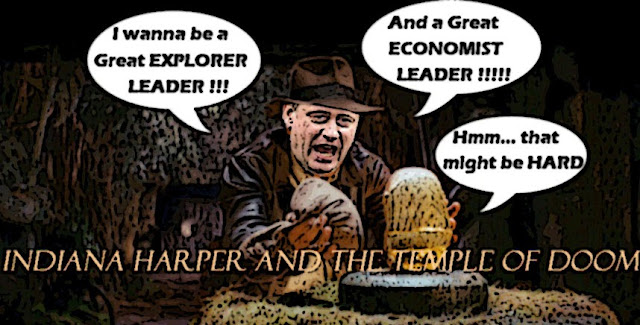 Twas the night before Parliament, and at 24 Sussex Drive not a creature or a mouse rat was stirring.

Except in the dark basement where Stephen Harper was planning his triumphal  return, after his golden photo-op summer.

And no doubt rehearsing his new role as Indiana Harper or Great Explorer Leader. The man, who in his mind at least, led the successful search for the Franklin expedition.

As I'm sure you remember...

But sadly for him I fear his flight voyage of fancy will be short-lived.

For how can he boast about that search? When if we want to search for the living instead of the dead, we have to hope the military can find the right parts in a museum.

The Royal Canadian Air Force has quietly turned to an unusual source for spare parts to keep its venerable search-and-rescue airplanes flying: a museum. The Citizen has learned that, in July 2012, air force technicians raided an old Hercules airplane that is on display at the National Air Force Museum of Canada because they needed navigational equipment for a similar aircraft still in use.

Because that's what he's done to our military. They really are Con clowns.

But former head of military procurement Dan Ross said it’s “embarrassing” that the air force has to “cannibalize old stuff that’s in museums” to keep its planes flying.

And if you thought THAT was embarrassing, how is Harper going to pose as the great defender of Ukraine's sovereignty?

The man who would do ANYTHING to win the ethnic vote... 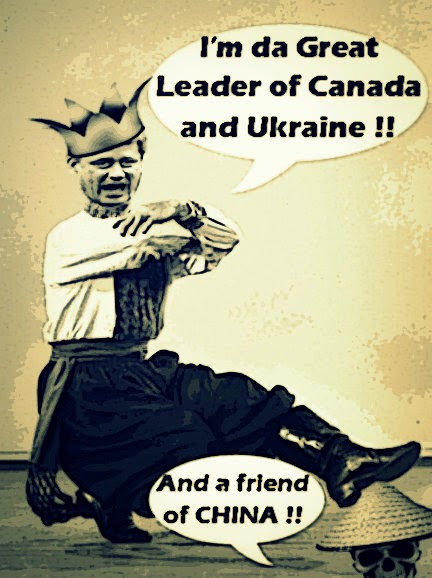 When he just sold OUR sovereignty to the Chinese government.

And of course, there are bound to be questions about this petition.

More than 400 academics are demanding the Canada Revenue Agency halt its audit of a think-tank, saying the Conservative government is trying to intimidate, muzzle and silence its critics.

Which should naturally lead to these even more disturbing questions:

Is he also planning to use the RCMP like he's using the CRA, to intimidate and attack his enemies?

RCMP analysts have warned government and industry that environmental extremists pose a “clear and present criminal threat” to Canada’s energy sector, and are more likely to strike at critical infrastructure than religiously inspired terrorists, according to a report released under Access to Information.

Is the RCMP out of control, or does he also believe that environmentalists are a greater threat than ISIS?

“Environmental ideologically motivated individuals including some who are aligned with a radical, criminal extremist ideology pose a clear and present criminal threat to Canada’s energy sector,” said the report, written in March 2011.

Would that oil pimp really try to turn Canada into a police state? 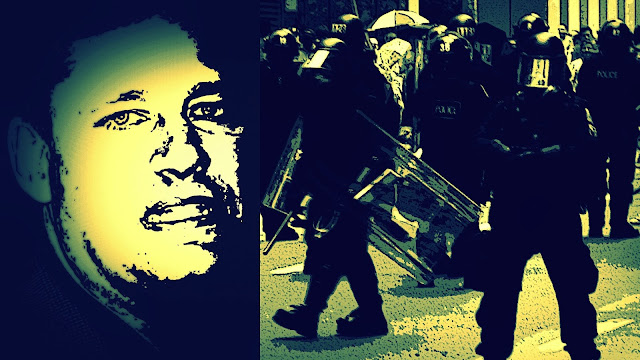 Is that what he means when he says he's a Great Strong Leader? 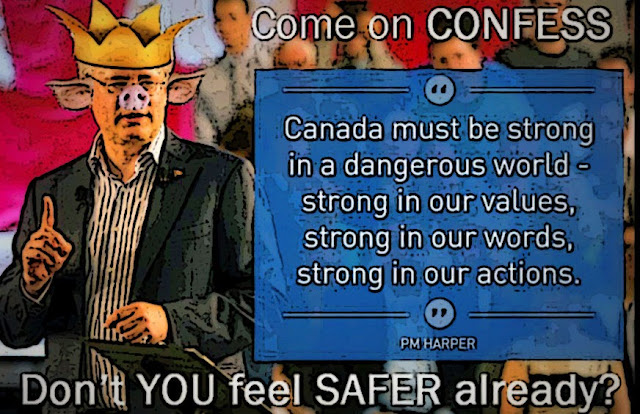 And if so is he insane? And who will protect us from HIM?

And if all that isn't enough to ruin Great Leader's return to Parliament then there's Mike Duffy... 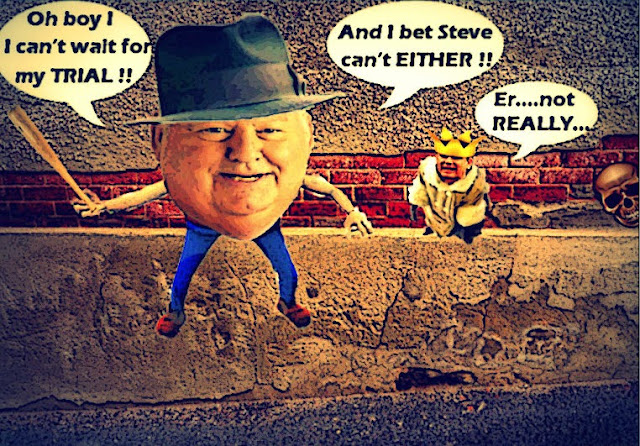 Who I'm sorry to report will NOT be attending the opening of his trial tomorrow  But only because he wants to make sure the timing is just right.

Stephen Harper and the Conservatives should be worried about the pending trial of suspended Senator Mike Duffy because of "what Mike might have up his sleeve," a former senior adviser to the prime minister says.

"Duffy, being the showman, he'll release whatever he can release when it's the most damaging and that's what the party, the prime minister, PMO has to be on guard for...So as we get closer, the longer this goes on and the closer it gets to the election date, the more damaging that type of information is."

So he can do Great Scandalous Leader as much damage as he can.

Which can only taint his corrupt government further.

And add to the sorry record of his whole term in office...

And of course, make even more Canadians even more determined to get rid of him.

Because that's the good news eh?

He was no Great Leader.

It has been a horror show. 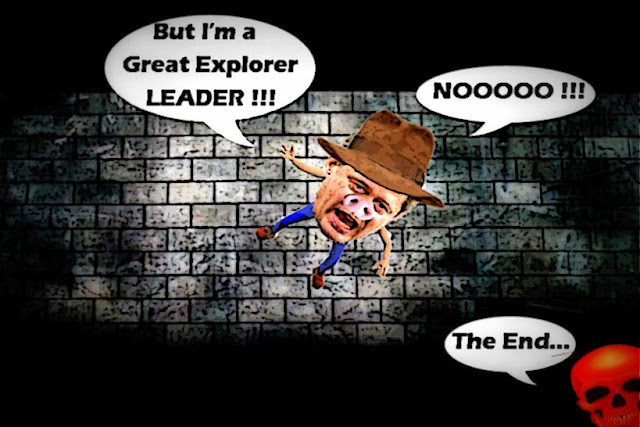 Harper is no longer Herr Harper. He is now Chairman Mao traitor Steven treason. As of Oct 1st, Canada will be occupied by Communist China.

Harper ripped into Putin for the annexing of the Crimea, Ukraine issue. However. Treason Steven says absolutely nothing of Communist China, doing the exact same thing to Canada. If there is a next election, Harper has already won it. China can give Harper millions and millions of dollars to cheat this next election, as he did the last election. Once we are under Communist rule? We can count on having our internet. taken from us. Gawd help the Chinese people if, they say anything about their evil government on the internet. Canadians will have no human rights either. China mowed their protesting students down, with machine gun fire. China has already interfered in BC regarding, the Teachers strike.

The RCMP are Harper's police state. They had sniper rifles trained on the F.N. people, trying to guard their waters from Imperial Metals, that destroyed the eco-systems at Mount Polley Mine. Imperial Metals catastrophic dam burst will leach poison, into BC's waterways for up to 60 years. The RCMP are saying the F.N. had a rifle. Any idiot knows that is Bear country up there. So of course they had a rifle and Bear spray. Anyway, everyone knows the RCMP are totally corrupt and can't trusted nor believed. They need to change their shirt color to Brown.

would harper and his herd use the RCMP to do their dirty work, much like Revenue Canada? in a heart beat. I'm waiting for the first "arrests" to start in the not too distant future. Right when the protests start against the Chinese government and their polluting of our country.

I'm sure harper and his herd will try to sell the idea of environmentalists are more dangerous than ISIS. ISIS doesn't vote, environmentalists do. harper would like us to believe ISIS is a great big problem for Canada. No they aren't. They are a long way, away from us. They may be a problem for those in the middle east, but not here. We are more likely to do run over by a car than killed by a terrorist from ISIS.

I'm more afraid of Ebola coming to Canada, than an ISIS terrorist. I'm more afraid of the China trade agreement than I am of ISIS coming to Canada. More people will die of Ebola in Africa than people kill be killed by ISIS in the middle east. So why all the concern about ISIS and not Ebola? Well there is oil in the middle east and Ebola only kills people, who are of little consequence to harper and his herd.