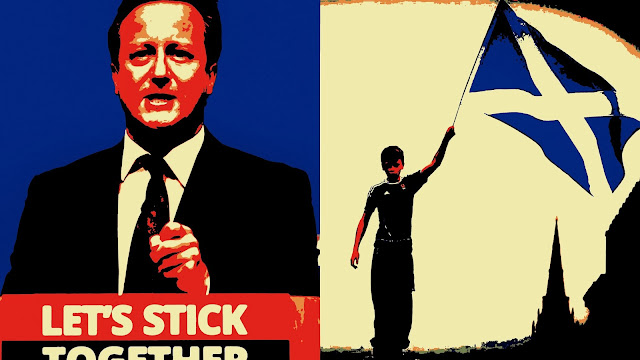 Well there he was today, David Cameron, the leader of Britain's savage Con regime.

The Prime Minister who has inflicted the most pain on the British people since the bestial Margaret Thatcher.

Trying to bully the Scottish people into voting NO by threatening them with a "painful divorce."

David Cameron has delivered a stark message to the people of Scotland that they would face a "painful divorce" from the rest of United Kingdom if they voted for independence in the referendum on Thursday.

Even though nobody has done more than Cameron and his brutish government to fuel Scotland's peaceful revolt. By waging war on the poor, privatizing medicare, selling the Royal Mail, going after seniors and the disabled, and driving tens of thousands of people from their homes.

And all he can offer the Scots with two days to go before the historic vote, is more of the same: more fear, more threats, more suffering, more death wrapped in the velvet glove of the rich and the powerful.

And his gang of Con beasts.

In his nightmarish United Kingdom... 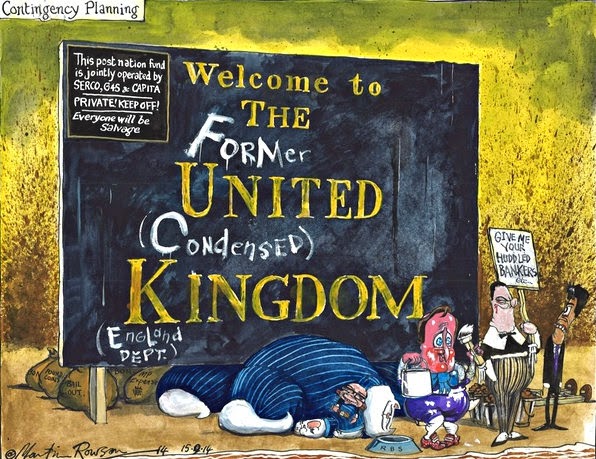 Where the poor get poorer, and rich get richer, and the fat cats purr as the cream runs down their whiskers.

This was the scene at a concert for the YES side in Edinburgh the other night... 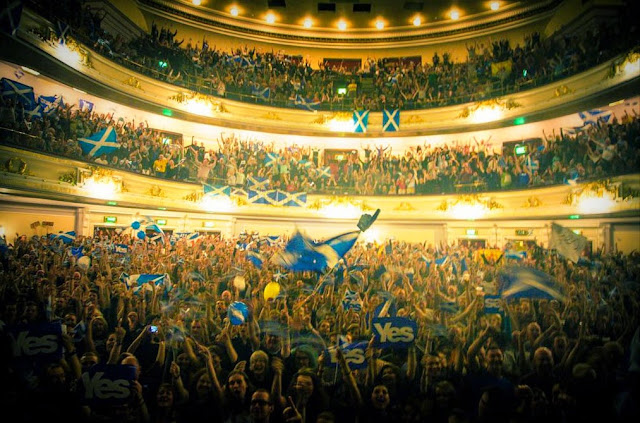 As polls show the referendum is now too close to call.

And their message, like the one a young handicapped woman cllmbed the steep cliff under Edinburgh Castle to place... 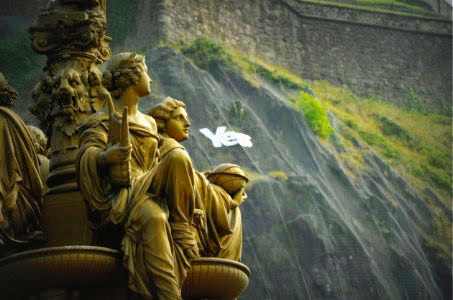 Is we are not afraid

We are a proud nation. And hope will conquer fear.

Because despite what you might read in our bought corporate media, and as I have tried so hard to explain, that's what this struggle is all about.

It's about the right of a people trapped in an increasingly right-wing country, to choose to live in a kinder, gentler, left-wing country.

And in the face of the NO side's ugly fear campaign, it is a magnificent  butterfly rebellion.

The inky wing of the British Empire does not know what to do. Historians will psychoanalyse the columns of Alan Cochrane in the Telegraph, monitoring their descent from pompous, self-certain swagger to incoherent, panicked meltdown. The Times, the Scotsman, the Mail, the Express, all peer out at Scotland from behind their barbed wire.

And the terror campaign of their rich corporate masters.

In a room behind a locked door, behind a policeman, behind a gate, behind another policeman, a group of millionaires get together. One, an old Etonian, nominally runs the country. The others, the CEOs of big corporations, actually run the country. They decide on a strategy: terror. We. Will. Take. Your. THINGS. From. You. It’s a fair trade, of sorts – give up your chance of self-determination and in return we will give you the cheap things that you love. This is Britain.

With their own social media, and an army of volunteers.

A passionate but peaceful revolt, and a shining example to others in Britain... 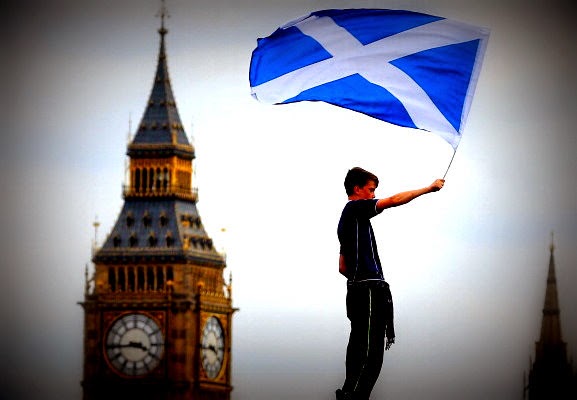 When the people of Britain see their titans defeated by a rebel army who used infographics and humour, what is there to stop them following? England needs its butterfly rebellion as well.

And hopefully an example to those of us in Canada. Because as I've said many times before, their struggle is OUR struggle.

And anyone who doesn't support it, out of some misplaced colonial attachment to a United Kingdom that was murdered by the Cons long ago, is not a progressive as far as I'm concerned.

But as for me, I'm with the rebels all the way.

So all I can say is soar my precious Alba soar... 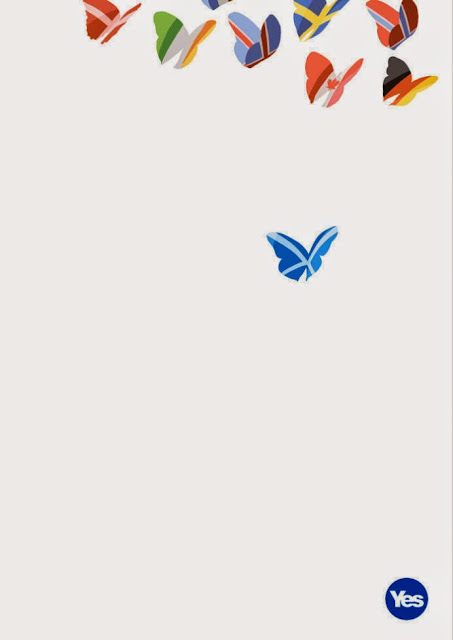 Fly bravely towards your dreams.

So you can finally be the nation you want and deserve.

Today it's your turn to fight for a better country, and a better world.

Tomorrow it will be ours... 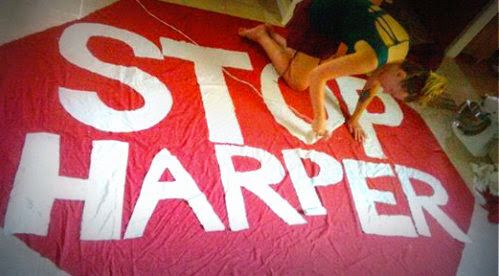 I hope the separate. Being part of Great Britain isn't that great. Things are not going well, with the con government, so really what do they have to loose, except David Cameron. Oh, does Betty Windsor get to keep her castle in Scotland, or does she have to give that back?

Who gets to have the oil/gas rigs in the north sea? England or Scotland. If Scotland gets them, then they are off to a good start. If nothing else Scotland won't have to pay for anymore of those excursions the Brits like to take in the middle east. that saves a pile of money right there. It maybe David Cameron and his buddies are afraid of Scotland leaving because if they do, their money goes also. It might cause a run on the English banks.

It is hoped Quebec is taking notes. They may want to leave after 1 Oct. and if they do, leave, I do want to move there. A Canada controlled by China is not where I want to be.

When Slovakia decided to leave Czech, they took a vote and it all worked out. Their president at the time, Havel, was cool about it and everyone has been o.k.

The world has changed and with it we may see the return of the city state. It maybe more responsive to people needs and wishes.

Sorry e.a.f. but several of your comments require 'rebuttal"

The Queen of England or "Betty Windsor" as you so humorously called her will remain as the Queen of Scotland.
The North Sea oil "ownership" is one of those "pesky" items that will have to be negotiated with England.
The British 'excursions" in the middle east ....Do you mean like the one the British govt is currently debating to fight ISIS? You remember ISIS? The terroristt group that sawed off the heads of 2 reporters and then a british aid worker? The same nice group that is promising to hack the head off another british aid worker this week.? Those "excursions? You dont want to do those excursions? To save money? Nice.
As for a "run on the English banks" Try the exact opposite. I guess you convienently forgot the run on the Royal bank of Scotland 4 years ago when the british govt was forced to take over its management from the incompetant fools that loaned money to everyone .They had to pump 85 BILLION dollars into it to save it from collapse. A run on the English banks? Hardly.
When you move to Quebec dont forget to renew your Canadian passport before you go , just in case you change your mind. Thousands of Quebecers did this in 1996 so you wont be the only "pure laine" to do it .
Slovakia tried to use the same currency as the Czech Republic but when the Czech's raised interest rates in the 1 st 6 months AFTER seperation the Slovaks couldnt afford to without causing inflation so they split. Their economy has dropped, the Czechs is still purring along.

Real facts e.a.f. , not a wishlist of the misinformed , uneducated dreamer.....would be appreciated.

The Scot struggle is ours as well. It is the most simple thing but incredibly complex: good goverment.

Its the march of Democracy its a good thing. If Ireland, Norway, Denmark and the Netherlands can live free, why cant Scotland?

Ummm Steve 10:09
I believe the referendum for the peaceful tearing apart of a United Britain is the ultimate proof of the democratic process.
Which ,when you look at the amount of eligible voters in Britain(vs actual population) it is very ironic.
Just 7% of Britains entire population is going to take Scotland out of the Union. 7% of the population will undo this 300 year old multinational state .......in a day. And the other people in the union dont get a voice in this? Democratic? Hardly. But please spin this anyway you want.
Scotland, England , Wales will be far far worse off split up than they are together.
England/Britain has voiced its desire to leave the EU several times over the years.
A devolved UK would only hasten that desision. Where would that leave the EU? Dangerously unstable. A new "Alternative party" has been rising in Germany with frightening speed. Former neonazis. Germany where the minority govt rules with a coalition. The majority of Germany taxpayers are sick of bailing out the likes of Greece, Spain, Portugal, etc. All while Germany's economy was booming. Well Germany has posted 3 consecutive "bad" quarters. Guess where the German taxpayers voter is wanting to go? Out of the EU? Gee where would that leave all other EU members if the richest, strongest country in it walked away? Exactly.
And tiny little Scotland wants to join? There might be nothing left by that time.

An interesting world we live in. Isnt that the ancient Chinese curse?

I'll not comment on most of your responses, but the one about ISIS. They aren't my biggest worry. Ebola is. It travels faster than ISIS. Now as to beheadings, it is murder, but where were all those countries when Saudi beheads people. All the terrible things ISIS has done and is doing has been done and is being done by other groups around the world. They just don't get the press. The people who were murdered by ISIS received the press because they were "westerners". The west is concerned about ISIS because it may impact their ability access oil. Iran doesn't have its things in a knot, they hve their own oil. Israeli isn't all atwitter about ISIS. They'll kill every last one of them if they come across the border. Its up to those in the region to deal with the issue. We have fought enough battles for others.

We all have our own views on Slovakia and the things you mentioned and we aren't going to change each others minds.

It is, has and always will be about Scotland and her people only.