Why Stephen Harper is Terrified of Mike Duffy 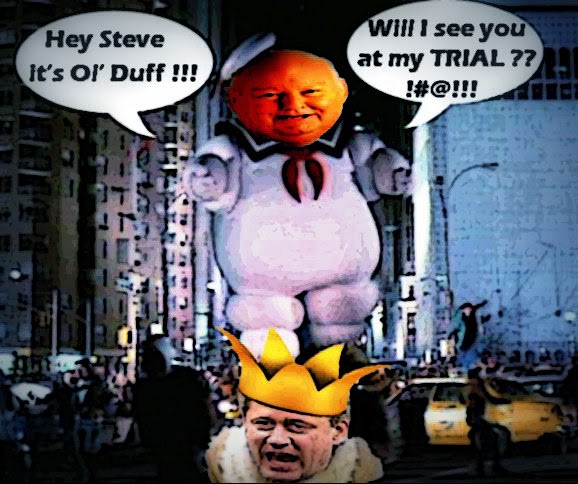 It's taken a long time, but Mike Duffy's trial process has finally begun, and you can be sure that Stephen Harper must  be absolutely terrified.

Especially after Duffy's lawyer said Harper could be called to testify.

Suspended senator Mike Duffy’s lawyer will not rule out calling Prime Minister Stephen Harper as a witness, as his client’s fraud case goes to trial.

After petitioning the court Tuesday morning to set the earliest possible trial date for his client, Donald Bayne said the defence is “considering any potential witness. It’s too early to rule anything out.”

And Ol' Duff is doing what he can to try to make sure the trial could have a BIG impact on the next election.

Duffy is waiving his right to a preliminary hearing to expedite the trial. Bayne expects, once it gets underway, the trial will run for six to eight weeks. With a federal election scheduled for next year, Duffy’s trial could either precede or coincide with the campaign period.

Which of course, as Lawrence Martin writes, the Cons are hoping won't happen. 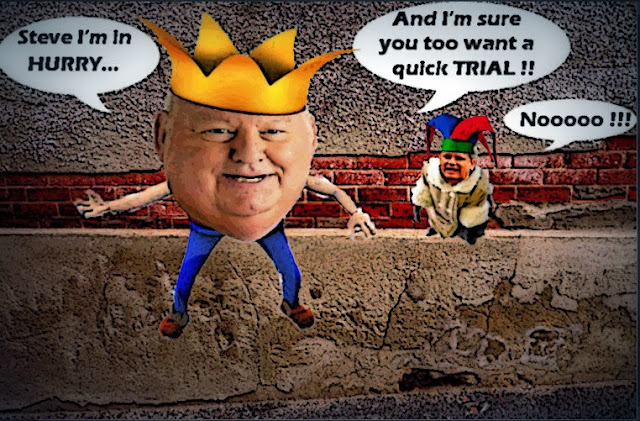 The party will be desperately hoping the trial can be pushed back beyond next fall’s election date. If it can be delayed even until late spring, the Conservatives have the option of calling an early spring election to avoid the fallout.

Desperately hoping the Duffy drip can be avoided, because whatever the result of the trial, it can only damage Stephen Harper.

The trial could well confirm that Mr. Harper did not know of the payment Mr. Wright made to Mr. Duffy or (although he has been a hands-on Prime Minister) about any cover-up. But that hardly means the PM or his party would be off the hook.

It’s Mr. Harper’s office. He sets the tone, the direction, the governing morality. As we speak, as a result of so many instances of dirty tricks, ethics transgressions, muzzling of opponents and the like, there is a widespread impression the governing morality is in the toilet. Coming in the run-up to an election, the Duffy trial could seal the deal and the fate of Mr. Harper’s government.

But here's the stunning part:

Could that  explain why Great Desperate Leader is already acting as if the election campaign has already begun? 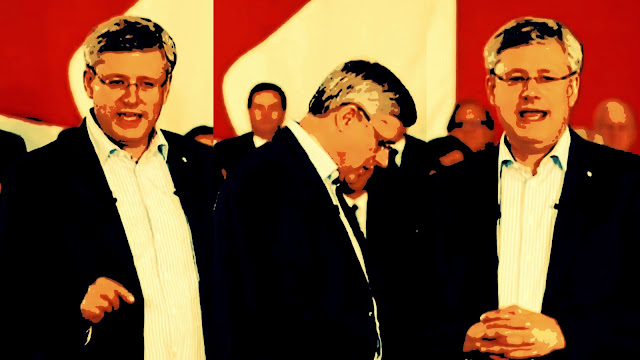 As I pointed out last night.

I mean think about it. Savour this thought: Could Stephen Harper be planning an early election just to try to avoid a CRIMINAL trial?

And I honestly believe he could.

Because that's how desperate he is, and how low he has fallen.

And of course, that's why I can't wait for the trial to get underway eh?

Because you know how I feel. 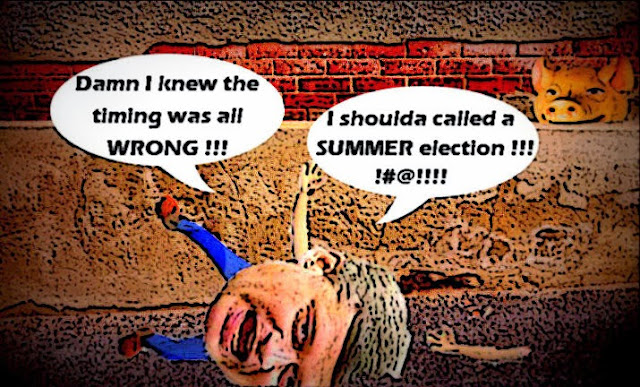 And all I can add is this:

I've been salivating at the possible head lines during this trial.
Unfortunately I fully expect some sort of back room deal to be hammered out just before or during the early stages of this trial. I would be absolutly amazed if Harper actually sits in the witness stand and is interogated by Mike Duffy's lawyers. I dont believe it will happen.
Reminds me of Brian Mulroneys "Airbus scandal" He may have technically won, but his reputation was ruined. And Mulroney was the lowest, self serving swine to ever hold the title of "Right Honorable Prime Minister"
Scum

Now Mikey just has to hire a couple of serious bodyguards to make sure he doesn't meet with any unforseen "accidents" before his trial gets under way. Because after all . . . .

Kind of reminds me of the BC Rail scandal in BC. Just when we thought that the ex MLS's who were called to testify and would have to own up to what really happened, Greedy Gordo Campbells' governement all of a sudden anti upped 6 million of taxpayers money to 'cover' the Basi and Virk lawyer expenses and voila! everything got shut down, except, of course, for the increased public debt hung on the backs of BC taxpayers. I no longer believe we live in a democracy.

Yes, there is that A.9:39 p.m. but I'm confident Duffy has left a "manuscript" to be published in the event of his untimely demise. Just please won't he write a book, so I can receive it as a Christmas present and have something fun to read on Christmas Day, its would be such a gift to Canada and me of course.

Perhaps harper and his herd don't really believe ole' Duffy would do it to them. some of the herd may not believe glorious leader would stoop so low and then there are those who may believe the means justify the ends. Who knows, but I'm sure harper thinks so highly of himself, he may truly believe the voters and the herd will forgive him. He has done so much for Canada, how could they turn on him even if ole' Duff does. You know he did all that stuff for, to, the Vets, and he really cared about F.N. women, like its a crime; and then of course there is the china trade deal, for that I'm sure he thinks we should all be eternally grateful and ole' Duffy, well whatever he says is just some old man, who was just engaging in criminal activities. Harper ought to remember even crooks tell the truth sometimes. Let see who blinks first. Nice post Simon.

I think we have to be careful not to get our hopes up that this trial is going to expose Harper's corruption. We'll have to wait and see. He and his party have a history of always dodging the bullet and managing to get re-elected. The general public doesn't tend to pay attention as closely as regular politics followers. That's why Harper got back in during the 2011 election despite the Contempt of Parliament he engaged in.

Harper seems to be sticking around for another election and still launching lots of attack ads against Justin Trudeau, so that seems to indicate he plans on fighting on. Perhaps he doesn't think he has much to worry about. I hope Duffy and his lawyer Donald Bayne really do have the incriminating evidence on Harper that they've been implying they've got on him. Otherwise Harper could slip away again.