A Canadian Veteran Prepares to Go After Peter MacKay 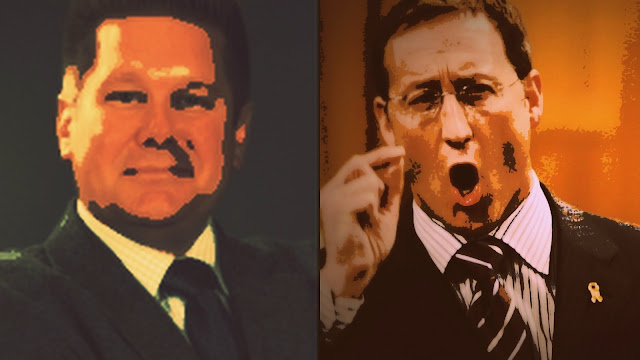 A few weeks ago I told you how veterans are preparing to declare war on the Harper regime, that has treated them so shabbily.

And how they are planning to make their presence felt in the next election campaign.

A network of veterans across Canada is planning a co-ordinated campaign against the Conservative government during next year’s election.

“When the election is called, you’re going to see some large fallout, believe me,” said Sydney veteran Ron Clarke. “As soon as the writ is dropped, we are in action.”

Now one of them has announced plans to go after the ghastly Con buffoon Peter MacKay.

A Canadian Forces veteran, who served for 27 years in such hot spots as Afghanistan, Bosnia and Kosovo, wants to take on veteran Conservative MP and former defence minister Peter MacKay in his Central Nova riding, setting up a tense dynamic for the 2015 general election.

David MacLeod is seeking the Liberal nomination in the northern Nova Scotia riding, which Mr. MacKay, now the Justice Minister, has represented since 1997.

And I couldn't more delighted.

Not just because the polls in that part of Canada are looking so favourable... So I think David MacLeod would stand a very good chance of bringing down MacKay.

But also because as Tim Harper pointed out recently, the vets could be a potentially powerful political force.

So far, it sounds like loose, angry talk. But the governing Conservatives are playing with fire with the country’s war veterans. If they can — as they have threatened — organize, mobilize and speak with one voice during next year’s federal election, the government will have a major problem on its hands; a problem of its own making.

And while they may be just getting started now, are still getting organized, and aren't yet speaking with one voice.

Right now, the government can benefit only because veterans groups seem unable to speak as one political voice. Should that change, there can be few other lobby groups that could mount a more powerful or politically damaging campaign against a government seeking re-election.

I am absolutely confident they will come together, and deal a massive blow to the Con regime... 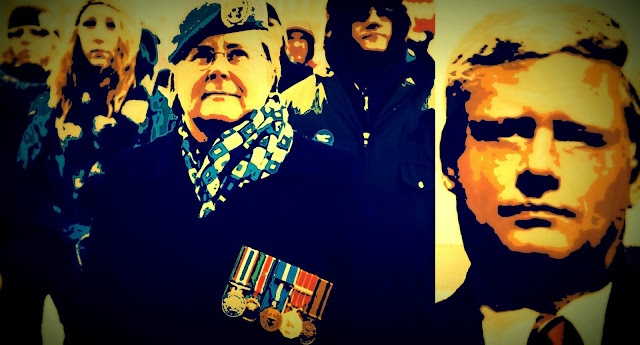 And if they need any help with ANYTHING I'm ready to volunteer right now. Because I support our veterans all the way. They have been treated in an incredibly shameful and un-Canadian manner. And they deserve so much better.

And of course, I have to admit it eh?

If one of them could bring down the Con buffoon Peter MacKay I would party for DAYS.

For the only thing better would be if we could also bring down Julian Fantino... 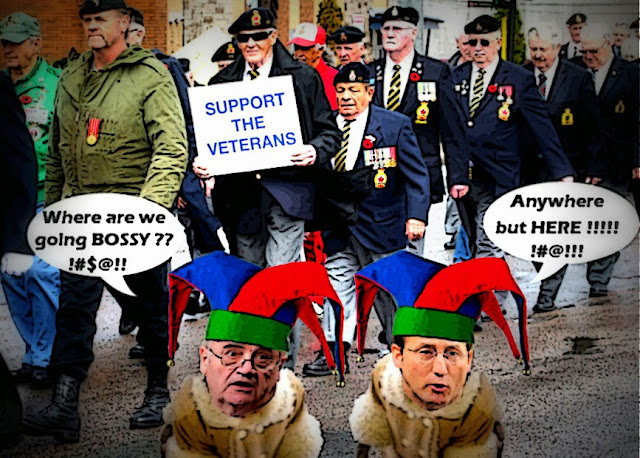 Because both of those shabby stooges deserve the same fate.

Show the Cons no mercy.

You wouldn't be saying that just because he's a Scot, would you? ;-)

hi anon...well now that you mention it....the thought did cross my mind. I'm not sure what the state of relations is between my clan, and the MacLeods. Whether we have been allies or murderous enemies over he centuries. But I'm going for him anyway !!! ;)

Great to see the Veterans come to the realization that they've been had....big time. Harper and his crew of misfits love to beat the war drum but don't hesitate to throw these fine men and women under the bus at every opportunity. They've irreparably damaged the relationship and the timing couldn't be better for our country. Now if the senior population would only awaken from their con trance.

The Liberals need a hook to get into the Veteran zeitgeist... otherwise the vetRage is all for naught.

Contrary to your statement, my little droogie, we're not all asleep at the wheel!

one way for the Vets to change things is to run for office. There would be any number of Veterans who could run for either the Greens, Liberals, and/or NDP. If all they do is remind Canadians of how shabbily they have been treated, it will remind others how shabbily other groups have also been treated in Canada.

A lot of Vets have leadership and management skills which would be well used as M.P.s. The current crop of Con M.P.s are nothing to write home about and lack even simple good manners.

All Vets have to do is show up at political rally's and ask the Con candidates why they were treated so shabbily, it will be enough to turn many off from voting con, because if they do it to a Vet, they will do it to anyone. Just ask the First Nation's community. They might want to get on the campaign bus and start asking just a couple of questions of all con candidates: why is less spent on First Nations children then children in the south. 2. Why is there no inquiry into the missing/murder of more than 1,200 First Nations women. I think voters need to be reminded of what the cons have not done as government, as much as what they have done.

I e-mailed the Royal Canadian Legion in my town and told them, they have my total support. I offered to do phone calls, to ask people to support our Veterans.

Six members of my family served in WW2. My one brother was President of a Legion. Our Veterans still serve Canada. They pay for prostheses for Children who have lost their limbs. That is what the Poppy drives are all about. These days, you see the Poppy money containers, full of $5's, $10's and $20 dollar bills. So you see just, how much respect we have for our Veterans. Legions donate to many charities. Our old WW2 Veterans, our fallen and our young Veterans of today? They mean everything to most decent Canadians. Harper and his cabal, are worth nothing.

hi bcwaterboy....yes it is great to see the vets organizing. As I said in my post I believe they can do the Cons great damage. Not just on the military front, but also by convincing more seniors that Harper is NOT on their side....

hi anon 5:21...don't be nast to bcwaterboy,he's a very nice person and he's only saying the truth. Too many seniors have voted for the Cons. However, from the comments I get here and the seniors I meet, I know may of them would like to get behind the wheel of a tractor trailer and bowl the Cons over. So you're right too... ;)

hi anon...the progressive parties should dispatch some of their organizers to help the vets get started. Their campaign Is Anybody but the Cons, so I'm sure they're willing to help the Liberals and the NDP....

hi e.a.f....I agree that it would be great to have a contingent of vet MPs. But since many are older and may not want to spend too much time in Ottawa, they can probably do more damage by turning up in all kinds of ridings, and giving the Cons nightmares... :)

hi anon....good work, very well done. When I hear what the vets plan to do I'll be phoning with them too. I'm not usually good at following orders. Ahem. But for them I'll make an exception....