The Con Speaker and the Death of Parliament 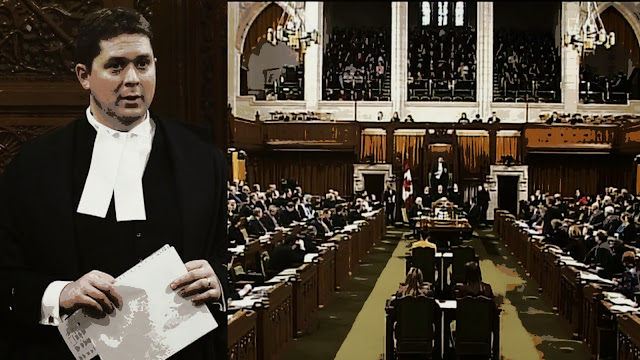 For years Stephen Harper and his Cons have been slowly killing our Parliament.

They have have debased it, they have rendered it impotent.

They have reduced it to a scripted horror show, where every question is answered with an attack on the opposition.

But yesterday with their ghastly leader out of the country they practically finished it off.

For this is what happened when Tom Mulcair rose to ask this question about Canada's mysterious mission in Iraq:

“Mr. Speaker, the Prime Minister has failed to answer clear questions about his ill-defined military deployment in Iraq,” Mr. Mulcair said by way of preamble. “Yesterday Conservatives refused, once again, to answer in this House, but the member for Selkirk—Interlake stated on CPAC that the mission will end on October 4. Will the Conservative government confirm that the 30-day Canadian commitment in Iraq will indeed end on October 4?”

Instead of any kind of answer, he got Paul Calandra, Stephen Harper's Parliamentary Secretary.

You know the Con clown... 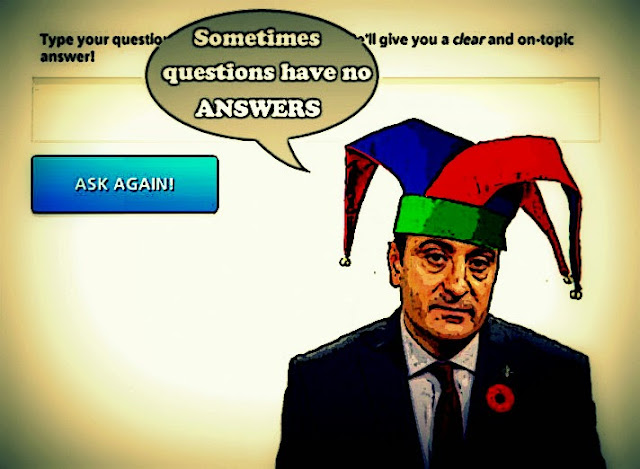 “Mr. Speaker,” the parliamentary secretary said in response, “there is a great deal of confusion with respect to the NDP position on Israel.”

Which as Aaron Wherry points out, was absurd enough.

For all the theoretical intents and purposes of this particular moment in the daily democratic life of our country, he might as well have stood and told the Speaker of his grocery list or read aloud from the collected works of Edgar Allan Poe. He might’ve stood and made farting noises with his left hand and his right armpit. Indeed, that might’ve at least entertained the kids watching at home.

But what happened next, when Mulcair continued his questioning, and appealed to the Speaker Andrew Scheer to ask Calandra to follow the rules of democratic decency, turned our Parliament into a cheap FARCE...

Yes, believe it or not, rather than ask the clown Calandra to answer the questions, or to stop turning Question Period into some kind of Con cabaret, Scheer punished Mulcair.

Removing his two remaining questions, and moving on to Justin Trudeau.

Even though Mulcair had every right to keep trying to get a serious answer about a very serious issue. He was merely asking Scheer to stop allowing Calandra to turn the House he looks down upon from his throne, into a bad joke or a fascist circus.

Or the death of our democracy.

We might, for instance, insist on expecting that if the government of the day commits the men and women of our military to a conflict that that government should grace us with straightforward explanations for that commitment. That if our democratically elected representatives stand in the House of Commons and ask specific questions about that commitment, that those questions—questions ultimately asked on our behalf—deserve answers, not merely responses.

This is not quite rocket science. These are merely the hopey changey principles on which we aim to govern ourselves.

And who can blame Mulcair for questioning Sheer's neutrality? When he has made so many dubious decisions.

And has from the moment he sat on his throne acted and sounded like a Con robot... 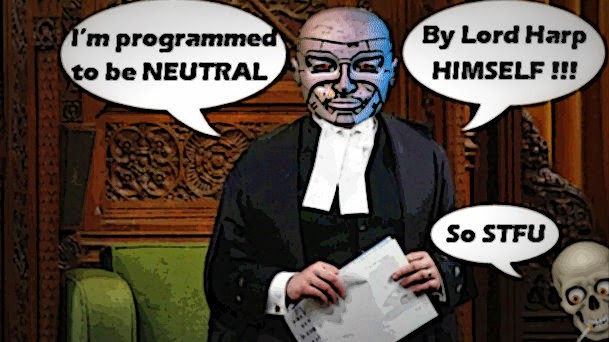 Or his master's voice.

And all I can say is, before we have to hold a mirror up to the cold blue lips of our democracy, to see if it's still alive.

When we fire his maniac master... 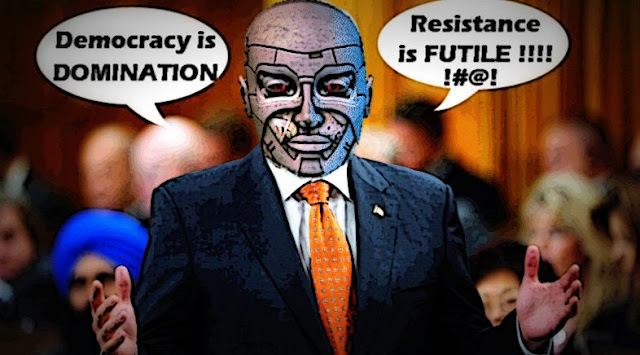 As ugly as this was....It was beautiful! You cannot make a better political ad for the expulsion of the Cons. Hope it gets a lot of play at election time. Scheer could not have indicted himself any clearer. The only thing I would add is Mulcair yelling:...I rest my case!.......after being "punished.

We can only hope that Rocco Galati and/or Clayton Ruby get sick to death of all this illegal bullshit and decide - amongst the 2 of them, to find a way to heave this group of sociopathic thugs!
And they sure as hell could crowdsource for their $$ - I'd gladly pay!

2007 Harper: “that any future military deployments must also be supported by a majority of parliamentarians" (speech from the throne)

Sorry, on this one I am compelled to disagree with you. Mulcair made a major mistake here in my view. I have no problem with his frustration with Calandra and his conduct, it was truly reprehensible, but it is not the first time we have seen this tactic not just from the CPC but from Calandra himself on such serious issues in QP. Mulcair's questions were clearly on point and substantive, I agree, and the response from the government totally disgusting. HOWEVER, where Mulcair went wrong was trying to involve the Speaker the way he did when he like any experienced Parliamentarian (let alone party leader) should know that the Speaker does not have a role in determining the validity of content in the replies to questions in QP. The wordings and forms followed, yes, but the content, no. So when he attacked the impartiality of the Speaker on this point despite this reality he took out his frustrations and anger on the wrong person and invited the reaction he got from Sheer.

I want it noted btw, that I have little use for Sheer as Speaker, I think he is one of if not the worst ever, but that does not change the ugly truth of how his job works, and how or system is structured. The level of ignorance I've seen in people in what they think the Speaker's actual job/powers are thanks to this issue has reminded me yet again just how poorly understood our system of government truly is even by fairly intelligent people in our society. However, when Mulcair went after him the way he did for the reason he did despite having been aware that he was expecting a Speaker to act in a manner completely atypical to the precedents and normal operating precedents involved for the Speaker from since long before the Harper regime Mulcair was showing as much contempt/disrespect for Parliament as Calandra was to it with his responses to Mulcair, and with as much basis for doing so. Frankly Simon this was IMHO a serious blunder from Mulcair, accusing a Speaker of that kind of bias is very close to nuclear level weapons in Parliamentary terms, and should never be done without as solid a case as can be made, and that case was not here in the substance, imagery yes, substance, no.

Mulcair showed his own contempt for Parliament with this action, and he also made it easier for Calandra to get away with his crap by making himself such a story with his conflict with the Speaker. It hurts me to have to side with Sheer on this one, but I do, because his ruling matches my own understanding of the basis of his job from reading Hansard/watching QP since the late 70s. That does not let Calandra off any hooks for his own contempt mind you, nor that I think Mulcair has real reasons to be frustrated at that treatment, but I truly think Mulcair let his temper get the better of him when he directed that anger at the Speaker (even if he truly believed what he said, that does not mean it was the right/wise/politic thing to do, and it did allow the "angry Tom" image to reform around him again) despite his should have known better about the role of the Speaker in QP.

I've got no problems in agreeing with people about the long overdue need to clean up Parliamentary process and procedure in many respects, including empowering the Speaker to require that there be some connection between question asked of government and answered instead of going totally off tangent, but the current reality is that this power is not one the Speaker has thanks to prior rulings going back to Speakers of real integrity unlike Sheer.

After all, the role of the Speaker is to facilitate debate, maintain basic decorum, but most of all to follow the rules as laid down by Parliament itself for his position. It is far harder for him to break precedent and give an independent ruling than it is for any judge in the judicial system and that is a real constraint. It is also why it is not the smartest move to accuse a sitting Speaker of partisanship/bias the way Mulcair did this week, especially when Mulcair has to know this reality at least as well as I do, and others who actually pay attention to process issues and realities.

I hated writing this comment Simon, but I felt it needed to be done, integrity and fairness to reality forced it from me. I do not disagree with how so many feel about this incident, but I have to disagree on the facts on the matter, and the way this was done because of what I know regarding those facts. Sheer may be the worst Speaker ever, but in this regard Mulcair asked of him more than he is supposed to do, and he should have known it when he did so, so therefore the Speaker could legitimately see his move as grandstanding and an attack on his Office and therefore requiring punishment, such as curtailing his questions as was done. Mulcair acted as disrespectfully to Parliament with this as Calandra, if in a different manner, and possibly in an even more serious manner. That really is a concern in my books from a LOO who is a lawyer like Mulcair, he really should have known better and controlled his temper targeting better. This is a real weakness for Mulcair, this angry Tom image, and he let it show too much and to the wrong target here. This is something he needs to watch out for, and his supporters need to not cheer so much for if they want to have any real chance in the next election of moving beyond where they are today as a party.