Did Brian Mulroney Order the Humiliation of Ezra Levant? 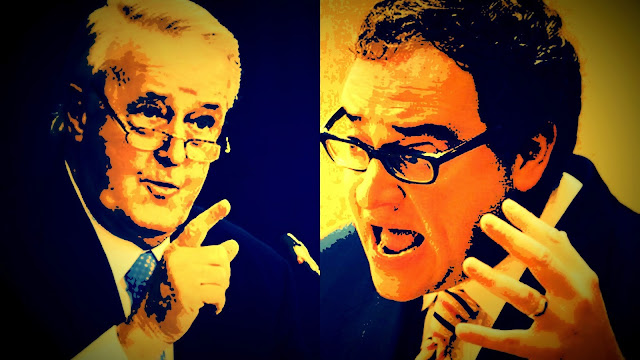 Yes, according to Robert Fife:


You know, the CTV reporter who first exposed the Senategate scandal.

And if it's true it couldn't be more delicious.

Or more humiliating for Levant.

But then of course, he has humiliated HIMSELF so many times before.

Like the time he mocked the reaction to the death of Jack Layton... 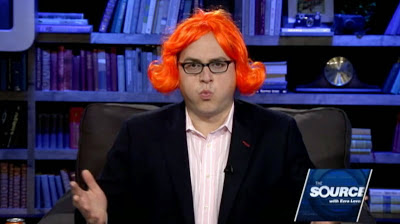 Which like so many of his ghastly performances said so much more about him that it did about any of that bully's many victims.

Who if they were still alive to defend themselves, or had heard of him, or watched Sun News even once, would treat him with the contempt he deserves... 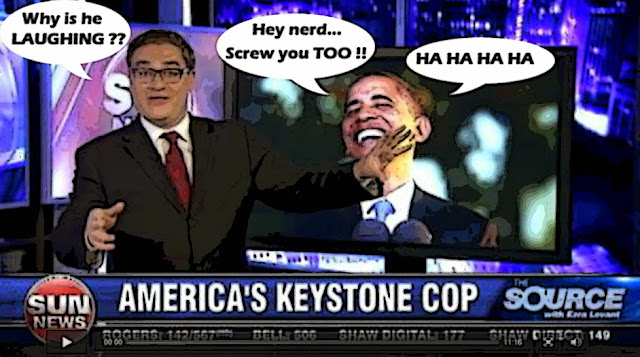 But of course, his sleazy attempts to smear Justin Trudeau have been the absolute limit... 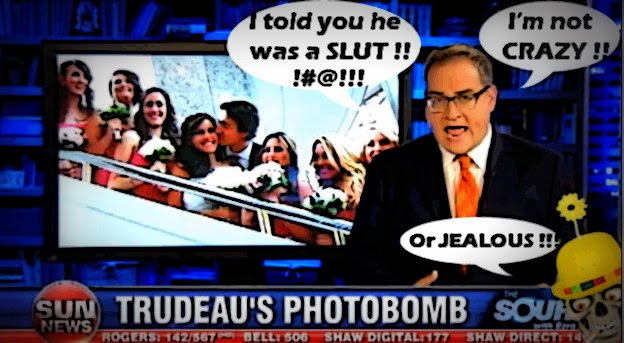 Where the bully, the beast, and the ugly Con loser come together in one steaming mound.

And insulting Justin's parents was the ugliest thing I have ever seen on Canadian TV, and should have resulted in Levant being fired IMMEDIATELY.

For exceeding the bounds of human decency. Period.

But the good part is that due to a wonderful twist of fate, the delicious humiliation of Ezra Levant, was apparently commanded by Brian Mulroney.

Because one, it reminds us that Mulroney is filling in at Quebecor for the REAL boss of Sun News Pierre-Karl Peladeau... 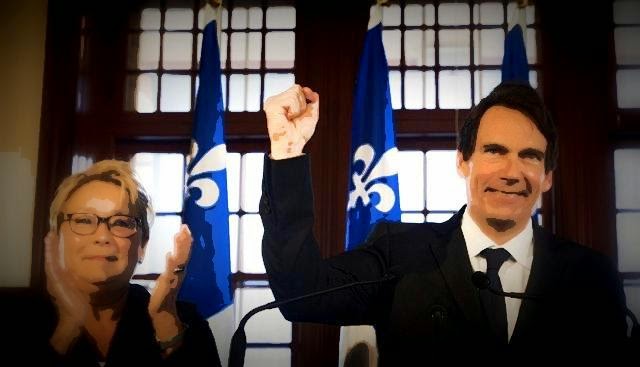 You know, the right-wing separatist millionaire who created Fox News North to try to destroy the CBC, but is too busy these days to spank Ezra himself.

Because he's running for the leadership of the Parti Quebecois.

And since he's the favourite, Sun News could end up being owned by the country's Separatist in Chief.

Which I think we all agree would be pretty embarrassing.

And would DEFINITELY distress their dumb as a spoon toilet viewers... 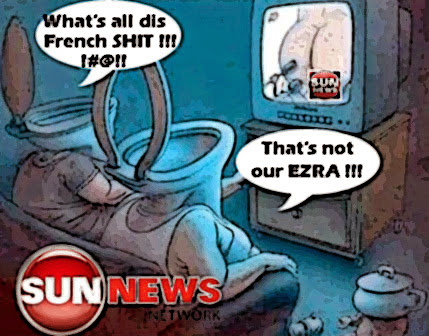 But of course the BEST thing about Mulroney's decision to force Sun News to apologize, and publicly humiliate Ezra Levant, is that by criticizing his deranged attack on Trudeau.

He is also implicitly criticizing Stephen Harper's equally obsessive and disgusting campaign to try to destroy the Liberal leader... 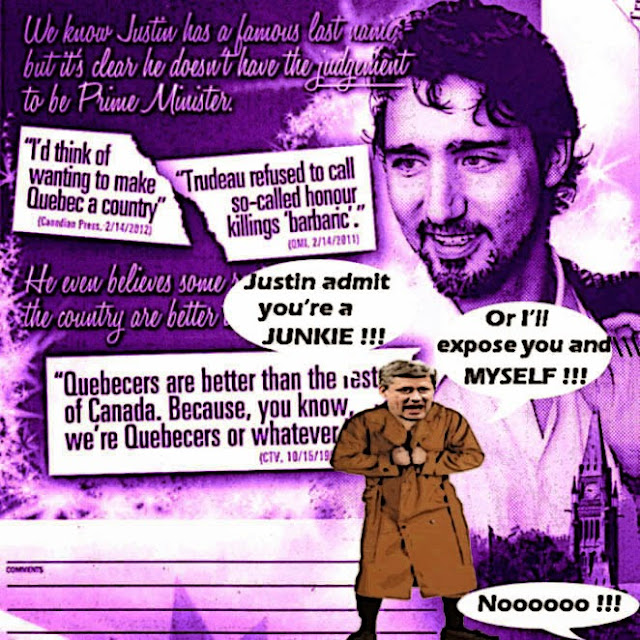 Which as we know is as sleazy, as un-Canadian, and as perverted as anything to emerge from Levant's nether regions.

And let's hope this is true too:


Because it's about time the Harper-PMO-Levant connection was exposed.

But yeah, that's who they are eh?

And it appears that even Levant now recognizes how low he has fallen.

For here he is, in one of his latest videos, portraying himself as a sad Con clown...

Will nobody dare tell him the ugly truth?

Will he NEVER understand that when he puts Trudeau and himself on the screen at the same time, he does himself no favours? And makes Justin look even better than he sometimes deserves.

Compared to him and Harper.

Poor Ezra, he must have dreamed of being a cool kid when he was young.

But fortune did not favour him... 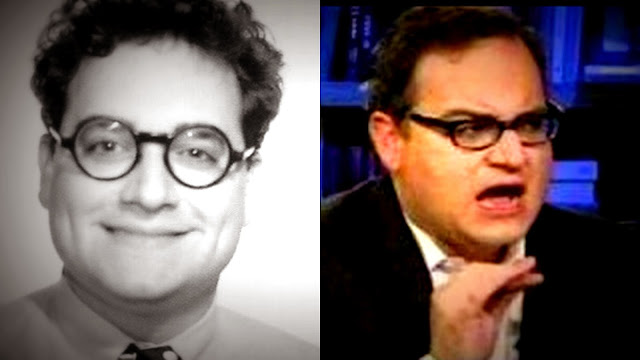 And age did not improve him.

He is still a ghastly bully, and the sleaziest act on Canadian TV.

And if Brian Mulroney and the Separatist Media Conglomerate are serious about cleaning up their toilet bowl of a news network. 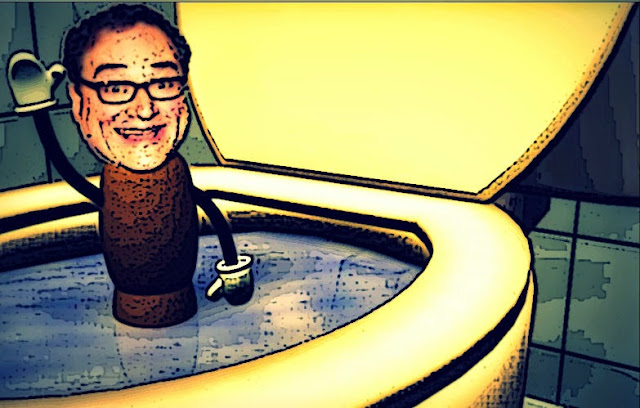 It is interesting that the neocon bosses have recruited a big gun in the form of Brian Mulroney to provide adult supervision to Steve Harper, Ezra, Karl and the Kids in Short Pants. The bosses understand that the current Reform party tactics and strategies could bring the whole Canadian neocon experiment to a halt if left to its own devices.

Levant really has a thing for dressing up in costume. That pot head Trudeau schtick is beyond pathetic - so much so, that it makes Trudeau look fantastic (and I'm not even a fan).

I have seen more credibility in a toilet then Ezra. He is like the screaming judge in Germany 1939-45. A screaming irrational party hack who needs 1000 B-17s to rain truth down on him.

all I can say, is ezra should develop a whole show as him being a pothead, as it mellows him out.

Mulroney rebuilt the Progressive Conservative brand in Canada, then it sent it down the toilet. What was left of the brand was bought out by a discount chain, called Reform. They renamed the chain, Conservative. Over a period of years that word has come to mean some very bad things in this country. Mulroney most likely would like to turn things around a bit.

As the current CEO of the corp. he can make changes and he appears to be doing it. Never liked the guy as a politician. Loved Stevie Cameron's book, "On the Take". But there still is a basic philosophical difference between Mulroney/the Progressive Conservative Party and Harper's Conservative Party. In my opinion one of the basic differences is/was the P.C. were still in favour of democracy. Harper and his herd, not so much.

Who knows in the end Mulroney may do more for Canada as a CEO than he did as a P.M. We can only hope.

"Neo-conservatism, I think is really the aggrandizement of selfishness. It's about me, only me, and after that, me. It's about investing only in things that produce a huge profit for yourself, and it's not about society as a whole, and it tends to be very insensitive to those people who, for one reason or another, have fallen beneath the poverty line, and its engaged in presumptions that those people are all poor because they are lazy. Neoconservatives believe that fundamentally. The truth of the matter is that the vast majority of Canadians beneath the poverty line in this country actually work. Some of them hold down two jobs, and don't actually
get sufficient income in order to meet their basic obligations. So it's a very different view, and I am a traditional Conservative, and I don't apologize for that."

hi anon...I think the Mulroney appearance is just a twist of fate, but I'm sure the Bloater must appreciate the opportunity because as you know he has not been shy recently about criticizing Great Ugly Leader. In the Con circles of Montreal, attacking your opponents in such a manner, even if they are Liberals, is not seen as something that should be encouraged. I hope that those kind of conservatives can regain control of the party one day, but I'm not optimistic...

hi Beijing....he really does like getting dressed up, and can't seem to realize that it only makes him look like an even greater asshole. And you're right, even if you're not a fan of Justin Trudeau, when you see him in that video next to Levant, he looks absolutely FANTASTIC... ;)

hi anon....you know although I like to portray Cons as I see them, I do hesitate to compare them to turds. But in the case of Levant I can't think of another thing to call him. His act is absolutely disgusting, and he seems to have no shame. I really can't wait until either he is fired, or Sun News goes down with everybody on board....

hi deb...I can't tell you how painful it was to watch that video. My companion Seb came into the room when I was watching, took one look at my face and burst out laughing. And the only reason I ran it was because it was mercifully short. But I still apologize to everyone. I hope that when he's fired he ends up as a street performer. So I can offer him a quarter if he tap dances and makes monkey sounds... ;)

hi e.a.f...there is a big difference between Harper and Mulroney. The Big M may have many flaws, too many to add up, but he is a better person and a better Canadian than Harper could ever hope to be....