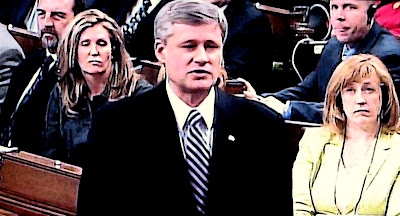 Take a close look at this photograph. Because for me it marks the exact moment when Stephen Harper lost his moral authority to govern.

The moment he stood up in Question Period today, and announced that he will seek to appeal this ruling.

"The facts, in our judgment, have not changed. "We will be looking at the decision very carefully and, obviously, considering an appeal."

Even though that means that Omar Khadr will continue to be held even longer in that hellish gulag called Guantanamo.

Even though the Judge couldn't be clearer.

"The ongoing refusal of Canada to request Mr. Khadr's repatriation to Canada offends a principle of fundamental justice and violates Mr. Khadr's rights," O'Reilly said in his 43-page decision.

And stated the ugly truth that cannot be hidden, and will not be silenced anymore:

To their eternal shame two Canadian governments allowed the Bush/Cheney war criminals to send a Canadian kid to a place like Guantanamo. Even though he was a child soldier.

Even though he had been badly wounded. 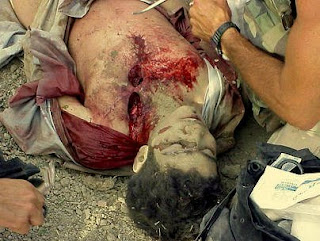 Allowed these monsters to keep him there for almost seven years and torture him.

Never lifted a finger to help him.

And COLLABORATED with his torturers.

How could we ever have allowed this to happen? How can we ever stand up for the rights of children and child soldiers after committing this human right's outrage?

You know...William Kuebler, his heroic lawyer, says Omar will probably not find out about today's decision for a few days. But I hope when he does it's as big a present as the Disney comic books he loves so much.

Because apparently he has been able to hold on to his humanity better than many Canadians have. Even in that horrible place.

And because his horror has been our shame. A black mark on Canada's reputation that will NEVER be erased.

Oh well. At least now I will never have to call Stephen Harper Prime Minister again.

Because after today he lacks the moral credentials to call himself a Prime Minister....and uphold our Canadian values. He should resign or be dismissed by all decent Canadians as soon as possible.

Until then all he'll get from me is this:

" . . .The ongoing refusal of Canada to request Mr. Khadr's repatriation to Canada offends a principle of fundamental justice and violates Mr. Khadr's rights," . . . .

Given that Harper is a Christian fundamentalist, he's obviously against "activist judges" and probably considers it an affront to his leadership that a Federal Court Justice should say such things while Khadr is "clearly" guilty.

So, he needs time to pick holes through a decision that has more thought behind it than Harper can summon in a year of policy wonking.

He hasn't had the moral authority to govern since the first election. He cashed in on the Liberal misfortunes and had to resort to attack ads to further advance his political career.

Now his days are indeed waning.
A long hot summer lies ahead and there will be a different political line up by this time next year.

What Simon said.
How much of a chance does the appeal have? Or is that just a face saving gesture.

Harper certainly has a mean streak! Allowing that poop on Stephan showed what a bully style he has. That is why they put him in the blue sweater. To make him look cozy and relaxed.

Simon: do you know the name of that woman who sits behind him. The one with the brownish, reddish,strawberry blondish hair? I see her everytime I watch House proceedings. She seems to be always enamoured with him. Here in your pic, she has a different look.
Being female myself, I often wonder what's the matter with these women.?
In the case of Omar, are they not mothers with deep sentiment for children and how they are treated? Attentive to their needs?

The seating plan is available at:

Oemissions, I suspect it's ingrained genderizing to hope women have more of a 'natural' charitable instinct than men do. The vicious girl gangs from kindergarten on up show they're just as tribal and authoritarian-prone as their xy-based counterparts, mothers or not.

Power is power, clinging to it at the expense of others is human and fellow-feeling, or lack thereof, is gender blind. MS's earlier photos of Jamaica, where you see women joining in the mob assaults on the queer victims, just highlights how women can easily turn on what might be their own children.

Hi Torontonian...living in Con Canada I've become so paranoid that I immediately thought that Harper was looking for a confrontation with the courts he hates so much.
But I think it's probably yet another example of Harper not being able to admit that he is wrong.
He must know that Khadr will have to return eventually...and that Obama would love to send him back.
So I believe he is just been stubborn, trying to score some points with his redneck base, and will sooner or later have to accept the inevitable.
But honestly, I would expect the Khadr case to be a non-partisan issue, and Harper's failure to do the right and decent thing absolutely disgusts me. He can't go soon enough...

Hi anonymous...I'm not a lawyer but since we have so obviously violated every law in the book I think the ruling is airtight.
And any other court in Canada would have ruled the same way.
I think the ruling does give Harper a way to save some face. But is he smart enough to go for it?

Hi Oemissions...as you know I honestly believe that Harper is a clinical psychopath...and thus incapable of empathy. I don't mean it as an insult, just as a statement of fact. But throw in the neocon shit and it makes for a particularly toxic mixture.
I'm glad Torontonian was able to help with the names of the MP's. I had no idea, but don't you love the expression on the face of the woman on the right? :)

Hi Niles...some of the things you say are true. But remember that the first generation of female politicians was pressured into acting like men...Margaret Thatcher being an obvious example.
And the fact remains that women in Canada are far less likely to support Harper than men. More likely to see the monster behind the mask.
Which unfortunately only proves Brother Niles, that they are smarter than us... :)

Back to the women behind Harper in the House. Usually the one caught on camera is Lisa Raitt, the former director of the Toronto Harbour Commission. The camera angle for Harper's replies in QP usually have her in the field of view.