The Death of Trooper Karine Blais 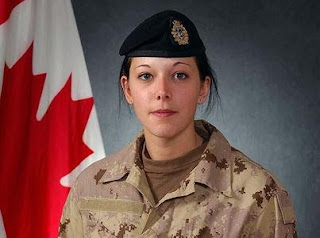 I've long believed that our military mission in Afghanistan is doomed. I think it's the wrong way to fight terrorism and religious extremism. I believe it's making Canada a more dangerous place rather than a safer one.

But that doesn't stop me from paying tribute to this brave Canadian soldier.

Because however misguided this mission is.... to me she is a HERO. For showing the brutish Taliban, and the poor oppressed women of Afghanistan, what a liberated Canadian woman looks like.

And for showing the little girls of Canada that they can be WHATEVER they want to be. Even a frontline soldier.

Which doesn't mean that I don't share the feelings of this relative:

"I think she did this for absolutely nothing... I ask myself what Canada is doing. We were blue berets, now we're fighters.

"I don't think it's our place at all, at all, at all. We should be leading peacekeeping missions, not combat missions like we're doing."

Or that I wouldn't give the same answer her family gave her, when she asked if they were proud of her.

"To answer your question, yes, we are always proud of you, despite the sadness that has enveloped us..."

Too bad she had to die in a country where one side murders women.

Mohseni said that women and men are not equal in Afghanistan and shouldn't be treated as equals, arguing that men are the breadwinners and that rural women are illiterate, making it difficult for them to provide financial support to the family.

"It is not possible for all women to pay the same amount of money as men are paying. For all these expenses, can't we at least give the right to a husband to demand sex from his wife after four nights?"

And nothing we can do will change those Medieval attitudes.

Karine Blais from Les Mechins, Quebec, showed those barbarous men what the future will look like. She IS a hero.

I wish I could just think of that.

Canada's military did do some Blue Beret work in the past, but even during those times the primary mission of the Forces was preparing for go-time with the Warsaw Pact. Within the forces Peacekeeping duties were often viewed as shirking and dodging the real work in Europe.

Prior to the brief era of Blue Beret operations Canada's military participated actively in all kinds of wars all over the world.

People need to get this clear - we have a military that trains to fight and gets into wars it has since before we were ever even a country on our own and it has ever since we were one. Some wars are cold, many are hot. Sometimes we do some honest to goodness peacekeeping. But as Romeo Dallaire found out the hard way, often peacekeepers don't get to do any good either, and they get killed too (the Belgians on his mission for example).

Of course you know that I regard your honestly-held position on Afghanistan to be: 1. Unreasonably pessimistic, 2. Reliant upon a too pessimistic view of the capacity of the Afghan people to successfully wage the kinds of struggles Canadians waged and won not all that long ago, and 3. Insufficiently informed about the necessary role 41 ISAF countries with troops in Afghanistan are playing in order to create the space for the Afghan people to continue in their struggle for democracy and freedom.

But if it is all the same to you, I will still call you a comrade, and say, hell, damn good post on this fallen sister.

Keep up the good work, Simon. No surrender.

Hi anonymous...don't get me wrong, I do support a strong well equipped FIGHTING force. But I also believe that having a mailed fist should also be accompanied by some of the special peacekeeping skills we have developed over the years...and have taught at the excellent institute in Kingston. By combining both I think we could use these special play an extremely useful and unique role in the world.

Hi Terry...thanks for your kind words. As you know I am extremely conflicted over the war in Afghanistan. But would be extremely happy to be proven a pessimist. Just like I have a special place in my heart for hopeless idealists... :)
Seriously though I respect your passion and your engagement. And since you also know that surrender isn't in my vocabulary,and that I march to my own tin drum, my affection for you remains undiminished. And I'm proud to be a comrade...