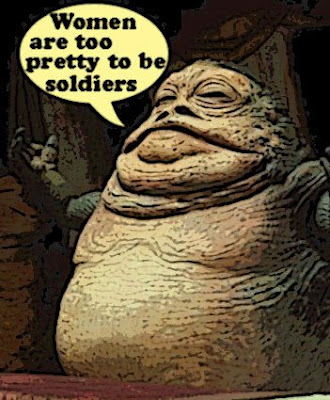 I don't usually care what the Jabbasaurus SoCon Michael Coren has to say about anything.

Because he's such a religious reactionary and disgusting homophobe he doesn't deserve to be listened to or read. And besides his plummy accent makes me want to scream. Or call him a (s)limey ARSE-hole.

But even by his Jabba blabber standards this is the limit.

So Canada sacrifices another victim on the altar of equality.

Last week a young girl dressed up as a soldier died in the increasingly futile and pointless war in Afghanistan....But what on earth was she doing in such a place and in such a job?

Because there are few if any women who have the skills required to serve as a front-line combat trooper.

Yes, yes, yes, I know it's fundamentally anti-Canadian to say this but I'd prefer to articulate the views of the silent majority than hide behind some modernist fetish that places more importance on the myth of absolute equality than the safety of a girl who should be laughing with college friends rather than fighting theocratic madmen.

Gawd. When the Jabbasaurus farted that one they must have had to clear the building.

But of course he would say that. Because the ... superstitious nonsense he believes in, was invented by hairy desert dwellers to keep women in their place. You know.... in the tent, with the goats, barefoot and pregnant.

And all this grotesquely sexist article amounts to is the most naked and disgusting defence of the patriarchy I think I've ever seen.

When in fact women in front-line positions have the same skills training and physical requirements as the men. I know a couple of female soldiers who could whup most guys' asses. And being able to serve and die for your country is an important measure of equality.

But what's their excuse?

Oh boy. These ridiculous old men still clinging to their dinosaur world. Where women are too PRETTY to fight and die. And daddy knows best. Will someone please tell them that the Stone Age is over ? And we're not going back.

In the meantime I'll cling to MY beliefs.

Trooper Karine Blais is a hero. 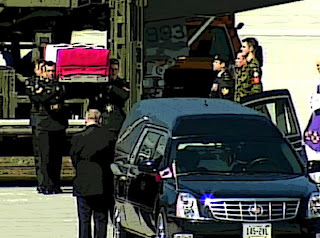 And a feminist one as well.

Coren has been on this subject like a broken record for the last week. It shows his patriarchal streak and his demeaning view of women.

No wonder he is where he is. CFRB and CTS TV and Catholic circles.

There's a near toxicity about him and if he were inanimate, I'd classify him as a hazardous material.

Hi Torontonian...a whole WEEK...OMG what a ridiculous prissy little fart.
As I said I do try to avoid him as much as is humanly possible. But I just found this article so incredibly smarmy and sexist I just couldn't resist.... ;)

I have to disagree with you, MS. She didn't die a hero. She died a soldier. A *soldier*. One that went through the CF training and made it past all those critical eyes to be okayed for overseas war zones.

She wasn't a "girl dressed up as a soldier". Ball boils on him, Coren tried to make her sound like a five-year old at play, or maybe a stripper.

Like she could have avoided an IED if she'd been a burly man towering over the field. Perhaps some of her CF peers, female and male, will find Coren to 'discuss' just how well they were all trained for close quarters.

But hey, it's good to know our troops are fighting for womens' rights to be judged on merit and not 'lady parts' over there in Afghanistan, when we're so obviously above such patronizing brutality back here.

Hi Niles...yeah maybe you're right. I probably should have said she was just another female soldier who like so many others over the last 20 years served her country well....just like any other male soldier.
But she's still a hero to me...