Omar Khadr and the Werewolf 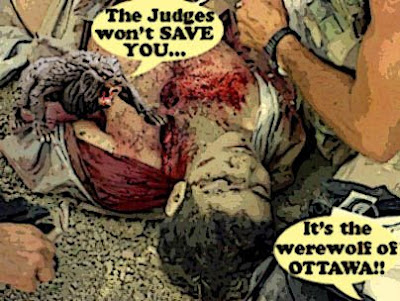 I had this horrible nightmare last night. There was this disgusting werewolf crawling all over Omar Khadr.

Mumbling something about appealing to his redneck base, how he was going to FUCK the judges, and how the little brown bastard hadn't been punished ENOUGH.

Which is when I woke up in a pool of sweat. Only to turn on the TV and see Lawrence Cannon accuse Khadr of killing Canadian soldiers.

And announce that the ReformCons were , ,,were MAYBE going to appeal.

Which left me shaking my head and wondering whether these foul incompetent Cons have lost the steering wheel....as well as their moral compass.

I mean I can excuse the Cannon. Everyone in Quebec knows that he's not playing with both barrels. Although only a vile Con could smear a defenceless kid...or turn tragedy into comedy.

But how can you excuse Stephen Harper for not being HUMAN enough to do the right and decent thing? For acting like a monster and savaging the rights of a Canadian child soldier.

I don't think you can. All I know is that Omar Khadr has suffered enough.

He needs to be brought home IMMEDIATELY.

But not in Guantanamo...where ALL days are bad days

When it comes to werewolves.

Have a great weekend everyone....