The Ugly Truth About Afghanistan 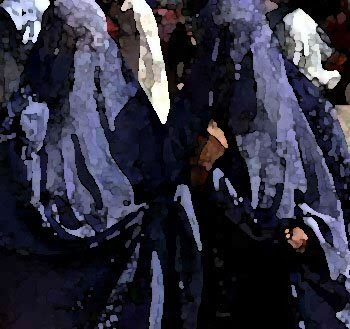 I'm glad to see the angry reaction over the Afghan government's plan to allow men to rape their wives.

But why are so many Canadians surprised?

The truth is that this particular law is the unremarkable outgrowth of an ideology, Islamic fundamentalism, that devalues women and still holds sway in Afghanistan.

Why are some still prepared to accept this outrage?

Some argue that, whatever law emerges, we have to respect traditional Afghan values. Would that hold if it were Jews who were being confined to their homes, or blacks prohibited from going to school? Restrictive dress codes, sexist rituals, inequality in the job market: these have been struggles for women in every culture and can only be resolved within those cultures. But forcing unwilling women to have sex, and imprisoning them in their homes constitutes abuse -- anywhere.

Why are some still peddling this garbage?

Now is not the time for Canadians to lose our heads over Afghanistan. Mindless panic on the one hand, and bubbling righteous indignation on the other, are bad guides to foreign policy.

A better life for women and for all who promote a more moderate Islamic society there is not just frosting on the cake. It is essential to the success of our overall project. To waver in our support of it would be not only wrong but foolish.

When the War in Afghanistan has NEVER been about the human rights of women. We haven't done a thing to end horror stories like this one.

And no matter how much we wish we could, we never will.

There is only so much that well-meaning, well-funded, outsiders can do if the dominant culture is irremediably tyrannical. As this realization dawns, public opinion will dictate our next move: out of Afghanistan.

But in a place like Afghanistan self delusion is worse...
Posted by Simon at 11:40 PM

Not to minimize the anger (or the need for it) over this latest example of the Afghan "de-mock-racy" that we're supposedly "over there fighting for"... but what I find interesting is that there has been such a national uproar over this news item, yet the silence was deafening over THIS news story:

quote: "The teenage convicts hold hands as they arrive at Kandahar prison by car, shackled in pairs at the ankles and wrists beneath their bulky red coveralls.

'The young ones are thieves and some are homosexuals, but mostly they are thieves,' says a prison guard who refuses to give his name.

Most of the 620 prisoners behind the walls of Kandahar prison are the usual assortment of adult male thugs and bandits. But scattered among them are women and children accused of so-called crimes that human rights organizations denounce.

Four years after the end of the brutal excesses of the Taliban government, Afghan authorities supported by the U.S.-led coalition, including Canada, are still jailing teenagers convicted of homosexuality and women accused of adultery, eloping or running away from their husbands.

The Kandahar prison, known simply as Mahbas - 'the jail' - to local people, is organized around four compounds ringed with small brick cells where often the only visible light is the red glow of a cigarette ember.

The prison has 11 women in one compound, where their dozen small children play. Three of the women prisoners have murdered their husbands, officials say. Most are in jail for offences not found in the Criminal Code of Canada or the US.

A couple are guilty of being 'Taliban women' while the rest are in for 'sex problems' and running away, according to Mohammed Aslam, the prison's head of security. He declines to offer much more of an explanation for the offences.

Human rights groups have their own interpretation. 'Dozens of women are imprisoned around the country for running away from abusive or forced marriages, or for transgressing social norms by eloping,' says the 2006 report on Afghanistan by Human Rights Watch. 'Some are placed in custody to prevent violent retaliation from family members.'

Amnesty International's 2005 report notes the same phenomena. It adds: 'There remained widespread confusion among officials in the criminal justice system, including judges, as to the exact legal basis of the 'crime' of 'running away.' Such an offence does not exist in the Afghan Penal Code.'

A Canadian unit from the Kandahar provincial reconstruction team paid a visit Monday to scout the possibility of starting educational training programs. They might also become managers for the ongoing renovation project and help equip the prison clinic, which has bare walls and empty shelves.

The main task of the PRT's civil-military co-operation unit is improving the professionalism and effectiveness of Kandahar's security forces.

Changing the law falls far outside their mandate. 'We are in a different culture,' said Maj. Ron Locke, head of the unit team. 'Different laws and different treatment standards are normal here. All we can do is try to influence them with advice and training.'" /end quote

That's the kind of thing we're up to, over there. So Harper can stow the neo-liberal "we're there to save the wimmin-folk" propaganda that he likes to spout -- it is tripe.

Maj. Ron Locke says "Different laws and different treatment standards are normal here. All we can do is try to influence them with advice and training." Well, thank goodness these troops aren't based in Jamaica, or Cameroon, or Iran... they might be braiding better nooses, or digging up fist-sized rocks for the benefit of the locals. I'd like to think we can do more than just "influence them with advice and training". How about letting the women and queers OUT OF PRISON? I'm sure some kind of secure facility could be found that isn't a prison. It is outrageous that 'uppity' women and queers should be left in prison 'for their own safety'... these people should be (at worst) in a hotel, not a prison.

Come to think of it, I don't really find the difference in reactions to these two stories by the general public to be "interesting"... I find it to be disgustingly predictable.

Hi 'berto...thanks for that story. I'm aware of the gay angle and I have written about it before. And after this I will write about it again. And let's not forget that delightful Afghan custom of raping boys...while our soldiers look the other way. Or escort vans carrying gays and young women to jail.
I don't know whether people are being selective...or whether it's just an exercise in mass delusion. We want to believe that our soldiers are doing some good, so we fool ourselves into thinking they are. When in fact we are up against centuries of religion and culture that no amount of killing and reconstruction will change.
I wish we COULD change things for the better, but I refuse to put belief before reason. I wish more Canadians would...