Susan Boyle: The Ugly and the Glory 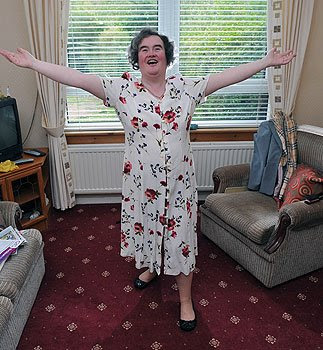 Well I see that Susan Boyle is on her way to becoming the biggest internet phenomenom EVER.

And just about EVERYONE has written something about her.

But I thought this feminist review was the most interesting.

Why are we so shocked when "ugly" women can do things, rather than sitting at home weeping and wishing they were somebody else? Men are allowed to be ugly and talented...But a woman has to have the bright, empty beauty of a toy - or get off the screen.

Susan will probably win Britain's Got Talent. She will be the little munter that could sing, served up for the British public every Saturday night. Look! It's "ugly"! It sings! And I know that we think that this will make us better people. But Susan Boyle will be the freakish exception that makes the rule. By raising this Susan up, we will forgive ourselves for grinding every other Susan into the dust. It will be a very partial and poisoned redemption. Because Britain's Got Malice. Sing, Susan, sing - to an ugly crowd that doesn't deserve you.

If American Idol and its many imitations actually featured a lot of people who looked like Boyle, then hardly anybody would watch.

What we want is young, pretty people to gaze at. We think we root for the underdog, but we don't really. We are a superficial, catty and vapid culture. We aren't interested in authenticity. We mainly watch TV shows featuring people we'd like to date, touch and have sex with.

Which is why I normally don't watch those shows. But will watch and cheer for Susan.

Because this story really moved me.

"I was born with a disability and that made me a target for bullies. I was called names because of my fuzzy hair and because I struggled in class.

"I told the teachers, but because it was more verbal than physical I could never prove anything. But words often hurt more than cuts and bruises and the scars are still there."

BTW did I mention that if you drive north from the Scottish village of Blackburn where Susan lives ....for just two and a half hours.... you come to the village where I was born?

Is that a close brush with greatness or what eh ?

Thanks for highlighting this. At the back of my mind I had an inkling of this. I could cut myself some slack my claiming that her performance pushed that aside. But I shouldn't. This soft discrimination is so pervasive and so damaging to everyday life.

BTW, My parents are from close to her group of villages. At least by Canadian standards of distance.

the review you quote raises a good point. While there have been female singers and actresses who have become popular based on their talent and perhaps in spite of their looks, appearance seems much more important in the way we judge women than in the way we judge men. See if you can think of ten relatively unattractive female performers who have made a career. Off the top of my head I not sure I can: Cass Eliot, Kathy Bates, kd Lang, Minnie Pearl, Lily Tomlin, Olympia Dukkakis, Margaret Dumont, Rosanne Barr, Margaret Hamilton....uh....okay I'm sure there are plenty more , but several on that list that i spent all of two minutes compiling are hardly major stars and at least three of them based their careers on the fact that they were unattractive. Try the same experiment with male performers and you'll a list in seconds. By the same measure, until recently we were as rule far more tolerant of pretty girls who had little or no talent than we were of handome men who couldn't act or sing (Teen idols being the exception of course)
As long as they stayed young and pretty that is (see the film Searching for Debra Winger sometime to further expand on this notion)

Another good example - musicians. Lot of famous male musicians are butt ugly but respected and popular for their musical talent. Popular, highly successful female musicians are almost always singers first and foremost - some accompany their own vocals and write their own material - but the star female instrumentalist is the exception, not the rule and those who do make a name for themselves as instrumentalists - Candy Dulfur and Bonnie Raitt spring to mind - are usually attractive.
Consider this: If John Coltrane, Frank Zappa, BB King or Jerry Garcia (to name only a few) had been born female, we'd probably never have heard of them.
I'm not saying this situation is the way it ought to be, just that it the unfortunate and unfair situation that we face in the world.

No disrespect but when the people pay attention and the money rolls in, I'm susre the carpet, furniture,drapes and wardrobe will get a makeover.

Nothing flashy, people from her part of Scotland aren't given to pretence but she will be improved in outward elements.

As for her voice, it may want some coaching but I don't think too much so.
Her life's journey has equipped her with the battery of emotions to best
convey the lyrics of songs.

I wonder if she would try Richard Strauss' lieder.

Hi Constance Vigilance...it's a pleasure because I hate sexism and ageism. I do think her performance did push some of that aside.
But what we really have to do is make sure it doesn't happen in our day to day lives.
Because it diminishes EVERYONE...

Hi Rev Paperboy...you make a lot of good points. Personally I find these talent shows and the judge's comments to be far too cruel.
And this one had a double edge. It was sexist AND ageist. As if she had to look like a Barbie doll. As if a 47-year-old didn't have the right to dream. I mean really.
And as you point out...Jerry garcia was adorable. But a sex object not so much... :)

Hi Torontonian...hmmmm...maybe you're right. Those munters from Aberdeen are the WORST...and since it's the Calgary of Scotland...they are all horribly greedy... ;)
As opposed to the munters from the Moray who are ALL absolutely FABULOUS.
However something tells me that Susan Boyle is going to keep her feet on the ground.
In fact, I just read that the only thing that has so far changed in her life is that her fame has caused the Blackburn Council to hurry up fixing her fence...

I think Susan is prettier than Celine Dion. And... I think she can sing better too!
I got a little fearful for her future... like what if the judges don't like her song next time, but then I listened to her 1999 version of Cry Me a River.
Beautiful.

ach noo simon lad, how are ye? a big aloha to ya!

susan boyle. even the last name is somewhat symbolic of how the mainstream views 'birds of a diferent feather'. why is it humans can't handle much outside 'their looks' and 'their fashion'? perplexing...i've never dressed 'normal' and some react, you can feel their repulsion.

when i had my cd out i knew, at the age of 40, that it would never be picked up by a studio...after all i was past their 'longevity limit'. the biggies consider their investment into signing someone on and how much they can get out of you , timewise, which of course equals money-wise. the music game is partially about human talent as a commodity. sick, but the music industry, like hollywood, is sick all around.

i hope susan never plucks her eyebrows or gets taken over by the 'glam' crowd. it may very well happen and i'm sure there's already a bevvy of companies lined up in the queue to have a piece of susan.

all i know is i cried and cried while watching/listening to her. a role model for not just the young but every person who never buyed into the bullshit and future and current generations who need to throw the bullshit away (because there's no deposit, no return on it).

let's add bullshit to our recycling regime, i'm sure it makes good fertilizer.

harper valley: I didn't cry, but I watched it often after it was noticed on either Dawg's Blawg or was it ?? Disaffected Lib? The first time I kept looking at the reactive faces.
I think people cry because we have all been hurt by other people's judgements and put downs.We weren't heard or listened to either.And... we know we have flaws but need to be accepted by somebody.

I was mercilessly mocked as a young girl,made to feel ugly.When Susan stepped out on that stage,I knew she,like me,was the girl who didn't get asked to the prom,the girl no one had a crush on...

Then this stunningly beautiful voice rings out,and you know,YES,this woman is finally gonna have her place in the sun!You just know she has been written off,all of her life,but she has this secret gift-and now she will be ignored no longer.All of us "ugly ducklings" felt the exhilarating thrill of that victorious moment!