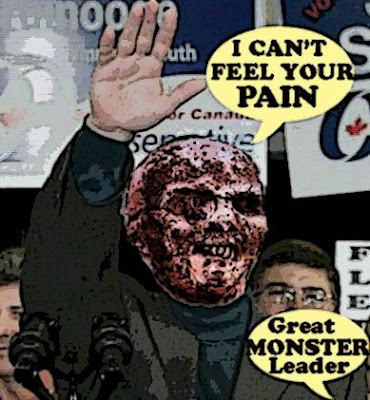 When I read what James Bow,one of the best and gentlest bloggers in Canada, had to say about Stephen Harper's Cons.

I cannot understand the government’s actions in this case....Don’t they realize how bad this makes them look? Don’t they care? This and this alone is enough for me to want an election so we can throw these bastards out.

Such a government can only be deemed markedly worse than any other government which has preceded it, regardless of any scandal you’d like to wave in my face. The time has come to punish this prime minister at the polls, and to send the Conservative Party back to the political wilderness where it currently belongs.

Because when James calls Harper's Cons mean-spirited bastards... I feel so much better about calling Harpo Great Monster Leader.

On the other hand why has it taken so long for James and a lot of other decent Canadians to come to that conclusion? Because the evidence has been there from day one of Harper's hideous un-Canadian regime.

What else can explain his decision to go after women and minorities, by ordering that the word "equality" be stricken from government documents. And killing the Court Challenge program?

What kind of cruel person would keep a Canadian child soldier rotting in a place like this?

What kind of bully would say he enjoys seeing fear in the eyes of other people?

What kind of political thug would turn our Parliament into a partisan pig sty...and launch the ugliest attack ads in Canadian history?

What kind of Prime Minister would condemn hundreds of thousands of Canadians to suffering by refusing to allow more Canadians to qualify for employment insurance?

What kind of human being can't feel the pain of others?

You know.... I think James and other decent Canadians took a little longer to appreciate the true nature of Stephen Harper because they couldn't believe that something so horrible could happen in Canada.

But who can blame them? Not me. Because although I'm going to keep fighting Harper my way....until the monster is driven from power. And I could never be as nice as James.

Except that for way too long, too many good people in this country were blinded by their own decency....didn't call a spade a spade...or a monster a monster.

And only after that monster is gone.

I feel the same as you about Harper since Day 1 of the 1st election campaign - which he won. It's been a very long 3 plus years & every day that goes by I shudder at what this megalomaniac is doing to this country of ours.

Got very depressed after the last election when he was voted in again. I couldn't believe it - that people could be so blind. But their eyes are opening now & we can only hope this monster & his thugs are thoroughly defeated in the next election.

I am 61 years old and i cannot remember a worse time politically in Canada. I have never known such hatred for a politician. Not even Jacques Parizeau and company got to me this bad. I once stood beside Harper in the Nanaimo airport before he was elected. I wish I had followed my instinct and kicked him in the balls right there and then on behalf of all Canadians. Before Harper Canada was a world leader and the best country in the world. Bastard is not too strong a word to describe him and his gang of nasty suits in Ottawa. I would trade them all in for a group of corrupt Liberals right now because they were nothing compared to what we have now. If we do not get rid of him soon we will look a lot like the USA, maybe worse in another ten years. Unthinkable and Unacceptable.