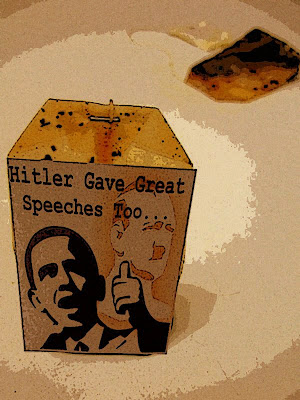 Golly. It looks as if the redneck, racist Republicons have failed to ignite a nation-wide revolt against Black Hitler and his Communist plans to steal their guns....and read their minds.

The day of "tea parties" pushed by Republican operatives and partisan advocacy groups such as FreedomWorks, that sought to protest the Obama government's tax and stimulus policies by encouraging people to 'wave tea bags' brought about only a few hundred "tea-baggers" in most parts of the U.S., despite relentless promotion by Fox News TV hosts.

Oh no. They set out to wave their bags and ended up biting them? Ouch.

And don't you LOVE this?

A 68-year-old woman at the Sunbury Pennsylvania protest had to be rescued by police from the Susquehanna River when she inadvertently fell in while trying to dump tea bags in it.

Caramba. I hope she wasn't rescued by a black man.

And then there's this dumbassitude:

According to reports, organizers of the D.C. event were told by National Park Service officials that the "million tea bags" they had hauled in on the back of a pickup would have to be taken away, rather than be dumped as planned. They reportedly complied with the request after realizing they didn't have the correct protest permit.

The Competitive Enterprise Institute, a local think tank, offered to provide its 12th floor board room as an alternate venue to dump the tea bags.

That'll teach them to get dumb rednecks to fill up a pickup AND fill out a permit. And what the fuck is the Competitive Enterprise Institute? Oh right.

Which just about tells you all you need to know about this so-called "grass roots protest."

Together with this ugly photograph... 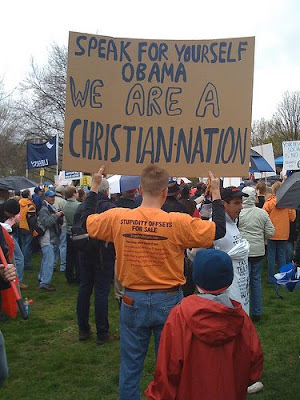 In short: A bunch of white old people and rednecks got together and tried to start a revolution...to drive the Fascist/Communist nigger out of the White House. And stop the fags from stealing their children etc etc...

And were used like dish rags by a bunch of rich people and companies that don't want to pay taxes.

But since the RepubliCons are now just a rump, and their failed Bush policies are rotting in the recession graveyard, nobody really cares what these tea-baggers do or say.

So all they ended up doing was making us LAUGH. And proving that you can't talk and tea bag.

Today it's the RepubliCons, tomorrow it will be Stephen Harper's ReformCons...the last of the Bush stooges.

But with enemies as dumb and as krazy as that....

Here is a link to the Tea Party estimates

On the surface, it looks that Denver led the pack with 5.000 but that's to be expected what with Focus on the Family and other Christian rightist organisations in that state.

In all, a pretty pitiful turn-out.
The right is crumbling like the statues of Lenin et al. in Russia and her former
satellites.

Some high schools do better with a pep rally than some of these cities do with a Tea Party.

Torontonian - Most conservatives were working at the time. When your supporters comprise primarily ultra-rich trust fund babies and lazy people suckling at the government teat, it's fairly easy to muster crowds on a Wednesday afternoon I'm sure. Also - I'd really like to know which issues I can disagree with you on without being called a racist. I guess "you're a racist" is the default insult you turn to whenever you disagree with someone? It's really just downright childish, but not as much as the incessant "tea-bagging" references. Get a job, grow up, and open your mind.