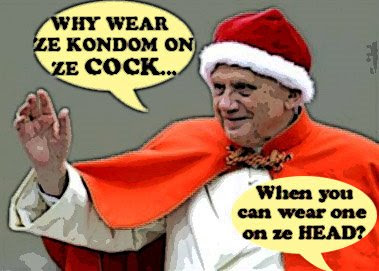 When I heard that Pope Benny said that condoms spread AIDS I was as shocked as this guy.

Benedict actually took it a shocking, deadly step further and announced to sick, poor, dying Africans -- 22.5 million cases of HIV and counting fast -- that condoms could actually make AIDS worse, and that everyone should, instead, do what he and his sour band of unhappies have done for the past 2,000 very repressed years and simply not have sex, unless you are married and unsoiled and maybe not even then, because if there's one thing his very cruel God will not tolerate, it's humans doing things with their bodies in any way other than what some vindictive bishop scribbled into an insufferable rulebook about a thousand years ago.

But then I thought wait a minute. Hold on eh?

Surely NOBODY is stoopid enough to believe that. Surely every sane person knows that the lives of millions of mostly women are at risk. Surely EVERYBODY knows the difference between syphilis and dementia.

My first reaction? Too bad this Jesus freak's dad didn't use a condom.

No wonder they believe in virgins who give birth ...or men who wear wings.

And of course.... you may not have to be a COMPLETE idiot to be a religious fanatic.

In Bulgaria, we also observe similarities between condoms and certain aspects of papal gear:

Did you know the Vatican was the only Western country to vote against a UN resolution calling for the decriminalization of homosexuality? Apparently they think hanging gays from cranes in Iran is good for the soul.

The condom worn over the Benedict's head makes sense. There's more than one knob on some people.

He and his haven't been chaste for 2,000 years. That order (along with celibacy) came down when the Church realized that its landholding priests, married (and to a lesser extent, cohabiting) (plus you must keep in mind, the upper echelons of the Church were pretty much defacto second and third sons of Europe's nobility and this was another sure avenue to acquire status, power and wealth from donations and conquest), were having to divide the land they held between their heirs. This lost the incomes of said lands from the coffers of said Church. Hence, ixnay on the official progssay.

This didn't mean priests (and nuns) didn't get it on with belles et beaus, and didn't mean they didn't use condoms. Lots of condoms.

*The research book "A Humble Little Condom"* is a sprightly read about the world that was, not what we're told it was from the pulpits. I recommend it. Even this 'layman's' (tahtoomcha) historical reference makes the Pope's attitude in modern times all the more heinous.