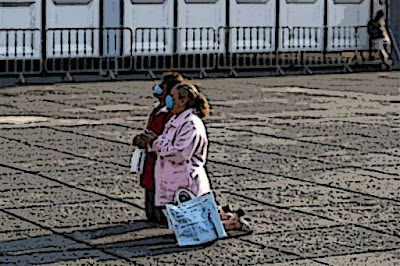 As the swine flu continues to spread around the world.

The billion dollar question is why is it so mild in most places and so deadly in Mexico?

It may be that we simply don't have enough cases to get a proper picture of the outbreak. It could be the virus is fizzling out...which H1N1 viruses often do as they pass from person to person.

Or it could be an echo of the Spanish flu of 1918. Which was mild when it first arrived in the Spring of that year. And deadly by the fall. 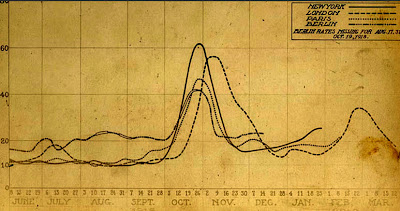 This old chart shows how the virus suddenly mutated into a killer. One that caused the immune systems of young and healthy patients to go into overdrive. Which also seems to be happening in Mexico and is another echo of 1918.

And the question is whether the virus has been in Mexico long enough to trigger a second wave...or whether the deaths are just a wrong turn for the virus as it mutates into a milder form. And learns to live with its hosts instead of killing them.

The problem is the longer these kind of viruses are out there unchecked by herd immunity, the more likely it is that they might mutate into a more lethal form, or swap genes with something like the Bird Flu virus....and that could be disastrous. Because while the Spanish Flu had an average mortality rate of 2.5 %....and the mortality rate of this virus is slightly higher....the Avian flu has a mortality rate of about fifty per cent.

The good news is that we should be able to answer these questions in a matter of days. And that whatever happens we are infinitely better prepared to deal with a pandemic than we were in 1918.

We have antibiotics, we have ventilators, we have new anti-viral drugs. Thanks to SARS and the Avian flu scare we also have all kinds of plans to deal with an emergency situation.

And above all there is an army of men and women in green and white who have been preparing for years to fight this battle. And we're READY.

So the only thing to fear is fear itself. And if we all do what we have to do.

We can still beat this bug.... 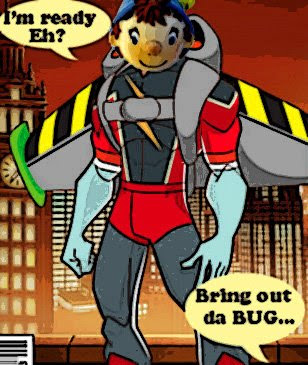 I'm waiting for the usual screeching about it being part of the biblical plagues visited upon mankind in the End Times for being so wicked and supportive of sinful pastimes. After all, this and the economic downturn too. Four Horsemen time, ya know.

If all that energy could be turned to practical applications, imagine the possibilities

Considering the lack of a considerable death toll from confirmed or suspected cases of swine flu in more developed countries in Mexico, I'm not too worried. You'd be a lot more likely to die too, even if you were a "healthy" young adult, if you were too poor to afford adequate health care, grew your crops with water full of untreated sewage from the major cities, or lived in a city where breathing the air equates to smoking two packs of cigarettes a day.
Not to rip on Mexico, of course. I'm just saying I can see why it's hit them harder.

Hi Niles....yes me too. But what's already going around in right-wing circles is the meme that it's really biological warfare. Expect that one to get bigger if the outbreak worsens.
Oh...I forgot...then there was the one where Obama unleashed the virus to destroy the cartels. They don't call them wingnuts for nothing eh? *gulp* :)

Hi Gay Young Liberal...yes I agree that Mexico's poverty and its health system might have something to do with the mortality rate.
But it's not only the poor who are dying, and when so many of them are healthy young adults it's definitely a cause for concern...