Swine Flu: When All the World's a Barnyard 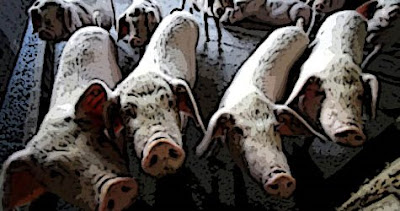 OMG. Hit me with a pork chop. With all the things that can kill us these days...the recession, the Cons, Pakistan, Iran...who knew it would be these guys ?

Or that the mortal danger would come from Mexico.

Caramba. Don't forget to keep your party sombrero handy eh? So you can wear it to your funeral.

Although also don't forget that we've seen this panic before.

U.S. officials ordered the manufacture of swine flu virus vaccine and the country proceeded to launch a mass immunization program that saw upwards of 40 million people injected with the vaccine.

The feared pandemic never occurred. But the vaccine appeared to trigger a high level of cases of Guillain-Barre syndrome, a type of paralysis that is often, though not always, time limited.

And the reaction was more dangerous than the disease.

On the other hand this is troubling.

Most of Mexico’s dead were young, healthy adults, and none were over 60 or under 3 years old, the World Health Organization said. That alarms health officials because seasonal flus cause most of their deaths among infants and bedridden elderly people, but pandemic flus — like the 1918 Spanish flu, and the 1957 and 1968 pandemics — often strike young, healthy people the hardest.

The leading theory on why so many young, healthy people die in pandemics is the “cytokine storm,” in which vigorous immune systems pour out antibodies to attack the new virus. That can inflame lung cells until they leak fluid, which can overwhelm the lungs

Because that's the same kind of mixture and the same deadly demographic that resulted in this catastrophe.

So I guess the questions that need to be urgently answered are these:

(1) What exactly is this virus... and is it being spread by humans? 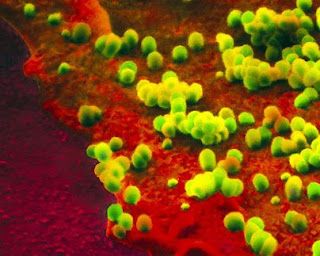 (2) Are the young and the elderly being spared because they are more likely to be vaccinated...or because their immune systems aren't as strong?

And of course the ultimate question. Is it just panic.... or the beginning of a pandemic that could make the recession look like a picnic?

Gawd. Just what we needed eh? Another reason to worry.

Another reminder of how puny we are.

And that all the world's a barnyard...

Labels: influenza pandemic, medicine, The End of Everything, The Greatest Depression

Good post Simon!
Are we getting swinedled?
Nathan Human Human at fadsmashers says its a franken virus.

Hi Oemissions...thanks a lot. I'm glad you liked it. My biology professor would have been proud of me... ;)
I've heard about the franken virus theories. I doubt it but you can't rule anything out.
And since genetic sequences of deadly H1N1 viruses have been made public anything is possible... :(