Jamaica: The Horror and the Silence 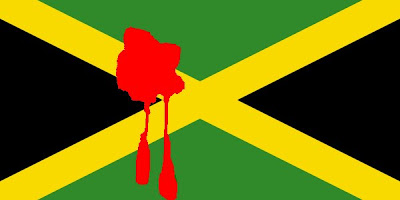 I'm glad those Canadian tourists got out of Jamaica alive.

I hope that before the scary end they had a good vacation..... in the most homophobic place on Earth.

In 2004, a teen was almost killed when his father learned his son was gay and invited a group to lynch the boy at his school. Months later, witnesses say, police egged on another mob that stabbed and stoned a gay man to death in Montego Bay. And this year a Kingston man, Nokia Cowan, drowned after a crowd shouting "batty boy" (a Jamaican epithet for homosexual) chased him off a pier.

One night last month, Andre and some friends were finishing dinner when a mob showed up at the front gate. Yelling antigay slurs and waving machetes, sticks and knives, 15 to 20 men kicked in the front door of the home he and his friends had rented and set upon them.

His skull has deep cut marks and his ear was sliced in half, horizontally. Doctors managed to sew it back together and he can hear out of it again. 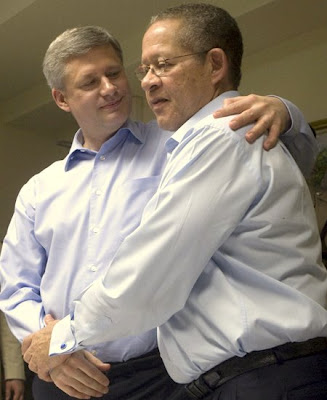 The ugly bigot who recently said this:

I was hoping the plight of gay people might come up at a news conference this morning. But it didn't. Harper didn't mention it .... naturally. And the media asked no questions.

But instead there was NOTHING about the poor gays of Jamaica. Nothing about this humble boycott.

Can you imagine how powerless I feel? The deadly silence continues.

And the horror goes on and on... 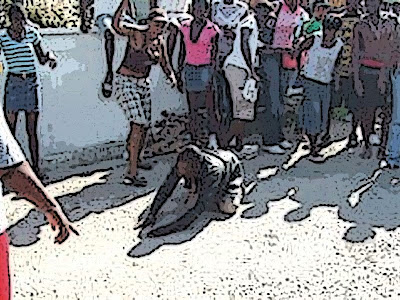 Harper looks like he's in love. First time I ever saw him look that way.Affectionate.

MS, given the official 'we ain't budgin' on buggerin'' err..stance, what is the likelihood that Jamaica has become yet another 'experimental lab' state for the neocon/socon ideology, as noted in blog columns recently? The talk is about the experiment finally being rejected in Latin America after lots of bloodshed and totalitarianism, but has it merely been shuffled over to the Caribbean islands?

I find it interesting that the so-called Conservative leaders are the ones most inclined to literally snuggle up in photo-ops, but only with like-minded autocratic authoritarians. I don't know about the affectionate idea though, it looks like a paused struggle to stop someone from groping anymore intimately. Maybe that *is* affection to some fellas.

Oh, and MS, sorry about sending you into complete chastity on the earlier subject matter re: Jamaica (snicker). I expect your Significant Other will somehow convince you 'safe sex' can have a lot of meanings.

Hi Oemissions...yes I must admit that the sweetest look I've ever seen Great Leader give anyone. He sure picks his sweethearts.... :)

Hi Niles...well I think the colonial influence and the church are respnsible for the "buggery" laws.
And as for the violence I believe it can be traced to two things. One the political violence of the seventies where the CIA was definitely involved.
And the fact that out of that violence ...and the poverty...came the violent gangs that spread to the U.S., became even more violent...and were deported back again.
If anyone wants to use that place as an "experimental lab" all I can say is keep your head down and good luck... :)

Dear gay brother, I just read your post. Such an outrage cannot be ignored. Please be assured that I am making arragements and I am mobilising all klansmen in Alabama and other states. We will give you an advanced notice before we travel to Washington,D.C. to demonstrate in front of Jamaican Embassy and make our voices heard and our burning crosses seen all across US.

Mmmm, no, buggery doesn't mean "holding hands". It means sodomy, and all the vile diseases and syndromes associated therewith. Kudos to the Jamaicans for protecting the morality and public health of their population,