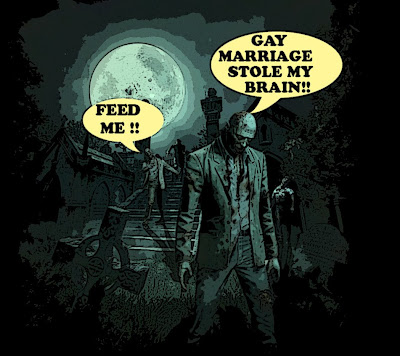 Uh oh. Yesterday I told you about the homophobe zombies' new attack ad against gay marriage.

Well today they're not doing so good. The zombies have run into a wall of scorn. That's what happens when you don't have a brain eh?

And the parodies and putdowns are multiplying...

And then there's the one that Fern at Dammit Janet found.

And the part I love the BEST.

The nasty homophobes forgot to register their domain. So now it's under new management.

Oh boy I LOVE my people.

You know we don't have much money. We're only a small minority and we have been forced to fight a million battles. From defending our right to love to defending the rights of kids not to be bullied to death.

So we can't even hope to match the $1.5 million those hideous homophobes spent on that zombie ad campaign.

But somehow with the help of our super fabulous straight friends and allies we always manage to fight back with the humble tools of the oppressed.

Like those brilliant YouTubes, my , excellent photoshops, and Mark's awesome drawings.

And the TOTALLY awesome part is that that no matter how much money and hate those zombies have, they will wither in the light of day. Like they do in the movies.

The rainbow flag of freedom will ALWAYS fly proudly. 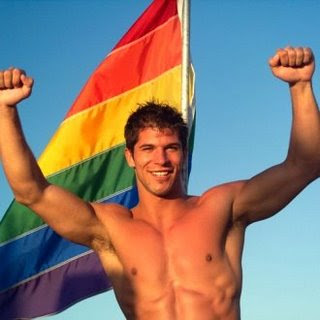 P.S. The nasty homophobes have been taking down YouTubes that include their material. So I don't know how long the video will last. But it doesn't really matter because it's the spirit that counts. And I'm still laughing....
Posted by Simon at 7:55 PM

Hey Simon,
I'm not sure which domain they forgot to register, because nationformarriage.org is still up and running... sadly. If only malicious internet activity designed to crash website servers weren't illegal.

Right on Simon. It's been heart warming to watch so many parody spots on youtube.

The bottom line is that those religious zealots may have money but they sure are lacking in creative talent.

1.5 million dollars for such lameitude? We are winning.

Did I not say yesterday that they were fighting a losing battle, they know it etc.. I hate being right sometimes. Wait a second. No, I don't. Not in this case. :-)

I do appreciate your point that it isn't coming quick enough. I can certainly empathize with that. But already a lot of things have happened in my lifetime that never thought would happen in my lifetime.

But somehow with the help of our we always manage to fight back with the humble tools of the oppressed.

Thanks, Simon. I have a strong sense that the generation(s) of (super fabulous) straight friends and allies younger than I are even more willing to join in that fight. It will happen.

Hi Gay Young Liberal...I think they had another cooler URL at least that's what it said at Joe My God which is where I ripped it off. Oh well...as I said...it's the spirit that counts... :)

Hi Beijing...yes I think that poking fun at them is the best weapon we have. And it's cheap !! :)
Really to argue over facts with them makes it look as if there is something to argue about. And I'm not prepared to do that anymore...

Hi Fern...heh heh heh...well if you put it that way...I agree.
For all the money and green screens that sure was a freaky ad... :)

Hi Frank...I hate to tell you but I saw a quotation from Martin Luther King the other day that said something like "wait usually means NEVER." Ahem ... :)
But I believe you when you say that change WILL happen, and that what is happening very slowly can suddenly become a flood of change bursting through a dam.
Of course if you're wrong I'll be REALLY pissed off... ;)
But yeah it's great to have so many straight friends and allies and I'm absolutely totally sure that with them we can't LOSE...