Billy Bob Thornton Gets the Gravy 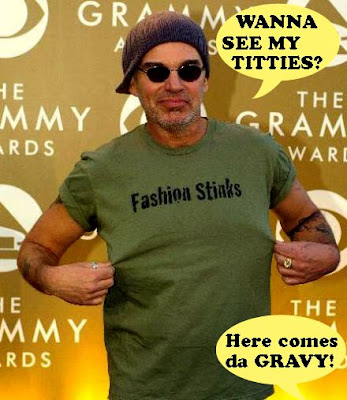 When I heard that Billy Bob Thornton had compared Canadians to mashed potatoes without the gravy I was naturally outraged.

How dare that grit lovin bubbah accuse us of being soft and mushy? When EVERYONE knows we're tough and tasty..... like french fries.

And we LOVE gravy.

Billy Bob Thornton elicited boos and catcalls last night at Massey Hall as he attempted to explain his bizarre behaviour during an interview on CBC Radio on Wednesday.

The explanation was met by further boos and catcalls of, "Here comes the gravy," a reference to Thornton's description of Canadian audiences as "mashed potatoes with no gravy" during his interview with Ghomeshi.

And there goes Billy Bob.

Like a possum with his tail between his legs. Or the redneck from Deliverance. SQUEAL.

I guess since he stopped wearing a vial of Angelina Jolie's blood around his neck he isn't the man he used to be.

Just like he will NEVER be a musician. Because I watched some of Boxmaster's videos last night. And anyone who paid to see that shite should have their ears....and their heads...examined.

But seriously.... a lot of Americans like to make fun of the fact that we are quieter and more polite than they are. Even though they fail to understand how EASY that is.

So I'm REALLY glad to see that we showed him that you can only push the quiet people around so much before we let him have it.

And I'd like to dedicate this farewell song to Billy Bob from a now UNITED nation. To remind him that although we are usually quite polite.

BBT reminds me of Ted Nugent.

There's not a lot upstairs.

The only thing about Canada Nugent liked was the spring bear hunt.

Maybe BBT will come back--chastened by the experience and wiser for it.

Give him a chance to redeem himself.

SpongeBob Uncle Fucka Thornton can put some gravy on a plastic spork and shove it up his a**.

Hi Torontonian...you know as bad as Billy Bob is nothing could be as bad as Ted Nugent. And I have to give the bubbah credit for doing the practically impossible and UNITING Canada.
So if he comes back and says sorry I MIGHT forgive him...

Hi Skinny Dipper...hmmm...a PLASTIC fork? Would that be painful enough? Actually considering how he's been made to look like a complete asshole he's probably been punished enough.
But think of it this way...we haven't sent the yankee enemy packing this way...since the War of 1812...
And that's good eh? :)

Here's the address of his publicist. Maybe we should send him some packs of gravy. And some medication for that flu he came down with so suddenly.

it takes real skill to act as spacey and random as Billy Bob did in that interview...