Another Good Reason to Boycott Jamaica

No. not this one.

Although I warned you that crime in that country is out of control, and that nobody is safe ANYWHERE.

Or the murderous homophobia.

Because that's been going on for years...and why we're already boycotting Jamaica.

Or the fact that Stephen Harper spoke to the Jamaican Parliament today and never said a word about human rights in that country. Or the gay pogroms.

Because he was too busy falling all over that country's bigot Prime Minister. 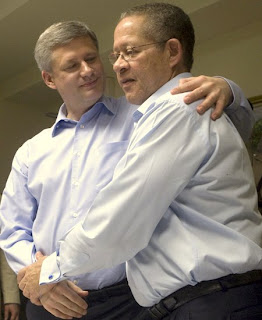 Ugh. How ghastly. I guess that's what happens when two homophobes try to hug each other.

But what's a little fondling compared to this latest bit of disgustingness?

Doctors from local hospitals in Kingston, Jamaica, report that they've been seeing a record number of broken dicks in the past few months. They attribute this to the increased popularity of "daggering."

Daggering, or "daggeration", is slang for very, very rough sex.

If you're a gay man you're hacked to pieces with machetes.

If you're a lesbian you are raped and/or murdered.

And if you're a straight woman you're DAGGERED.

Look I'm glad their dicks are snapping like twigs.

But why would anyone EVER want to go there?

P.S. After taking another look at that picture...maybe I was a little harsh on Great Loser Leader.

Maybe I just should have said...Hallelujah it's Spring !!!!!

I'm still trying to find something redeeming about Stephen Harper. Still looking ever since 1993 and still nothing.

The sooner we get rid of him the better.

Man, I must have led a sheltered life. I didn't know you could fracture a penis. Ouch. Sounds deserved, though.

He and his new BFF are dressed exactly alike as they clutch at each other. And badly. I wonder if he made any comment about the PM of Jamaica being of 'mixed extraction', since it's so common south of the US.

As for the 'daggeration', does anyone have any other sourcing for the supposed practise of 'rough sex' causing this? It almost sounds like an attempt to slant the information to hypersexualize het men of colour on the island...maybe in backlash to the homophobia? (it brought to mind those zomg stories of lipstick parties where teener girls competed to give head to teener boys - hypersexualization/myths of 'utes fallen away from 'family values')

I say this because of reading case histories for penile fractures presenting at ER. (yes, I'm morbid and amuse myself enlightening 'cool' young males around summer campfires. Better than monster stories for wide-eyed horror reactions) According to the medical attestations, it doesn't take 'rough' anything to pop the works. A 'normal' dive and miss of connection has more than enough force to expend impact (into even mattress) through a tumescent prick, bending and rupturing its hydraulics. (The smacking groin down onto a bike bar was a bit odd...but I digress)

If it is 'rough sex' as a new party game, are there corollary stories out there of a new tidal wave of Jamaican women being fu**ed/raped into warm jello? Because as you mentioned, you'd think there'd have to be.

Hi Torontonian...you've been looking since 1993? Yikes. But you could look for another hundred and you still wouldn't find any redeeming features. I can honestly say that I've never felt this way about another Canadian leader no matter how deeply I hated their policies.
And yes...the sooner we get rid of him the better...

Hi Dr Dawg...yikes neither did I. But then I'd never heard of teabagging either. :)
What appalls me is how violence has crept into every aspect of Jamaican life...from music to sex.
It's such a pity because it could be such a great place...

Hi Niles...good comment but I don't know what to say. And it's so hard to type with one hand on the keyboard...and the other shielding my crotch. Ouch !!! :)
Look as I told Dr Dawg, what horrifies me about all of this is how violence seems to be creeping into every aspect of Jamaican life. The U.S. State Department annual report has some horrifying stats about how women are treated...and how AIDS patients are neglected in hospitals.
I fully recognize that some attitudes have been conditioned by colonialism. And some male attitudes spring from the way they were treated as slaves. And then of course there is the overpowering influence of the church in Jamaican life.
But taking it out on the innocent is just wrong, and it's time to move on...

P.S. Now that you've told me how common penis fractures are I'm giving up sex.
I hope you're satisfied .... :(