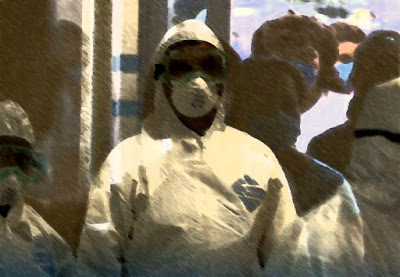 Well I see that Don Martin has swapped his fedora for a white coat....and declared that the swine flu outbreak is nothing to worry about.

It’s likely beyond containment now, but to describe the Mexican swine flu outbreak as a potential re-run of the Spanish influenza pandemic seems, subject to change without notice, wildly alarmist......Today’s swine flu is no 1918 influenza, so perish the comparison.

When in fact, although we shouldn't panic, we simply don't know enough to rule anything out.

What we do know is that patient zero got sick on April 2nd...and the first recorded fatality happened eleven days later.

Which means that the virus has been running wild in Mexico for at least a month. It has only just arrived here.

And we still don't know why so far it has only killed Mexicans.

Is it because there have been many more cases than reported...and there are some other underlying factors?

A couple of factors could be causing the greater death toll in Mexico, said Howard Markel, a physician and director of the Center for the History of Medicine at the University of Michigan.

"They may have had cases for several months now and probably have a greater number of people who have the disease, probably tens of thousands," he said.

Also, he said, the people who have died in Mexico could have had what he called "another co-factor," such as taking medicine or having pre-existing infections that would make them more vulnerable. It's also possible, he said, that those who died had an underlying genetic predisposition or condition.

Is it because they were poor?

Julio Frenk, former health minister of Mexico and now dean of the Harvard School of Public Health, holds an opposing view: The disease could be killing people who are not healthy because of their living conditions.

"There could also be some elements in the host," he said. "These are poor people. Maybe their immune response is not as efficient. So we're going to have to just keep trying to understand why this difference and whether that continues as the epidemic unfolds."

Or is it just the first relatively mild wave of what could become a deadly pandemic? Just like the one that broke out in the Spring of 1918. But didn't turn into an agent of mass murder until August....when the second wave hit. 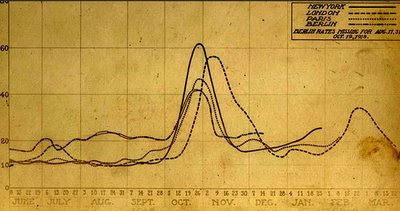 The bottom line: We still don't know anything about this new virus or where it's going.

Panic is bad, but so is denial.

“It is a tragedy only for people living ... in slums in Asia or Mexico. But will the honeymoon couple from Edinburgh die? No. A couple of Strepsils will do the job."

Don Martin should put his fedora back on.

Oh media, they always make everything bigger than it is. I even read an article in a local newspaper (obviously written by an ignorant) mentioning Stephen Kings book The Stand and the virus that played the main role in the story, Captain Trips. I mean seriously, out of the 152 deaths in Mexico, only 12 or so have been proven to be caused by the swine flu. Nevertheless, people are panicking all over the globe, pointlessly of course. Anyways, thanks for your article, I must agree with you completely...

Even if it only does affect "slum" dwellers with the fatality rates we're seeing in Mexico, that's going to mean a lot of deaths around the world.

There's a curious lack of real knowledge about the Spanish flu (not that nobody knows, but that the people talking about it these days seem not to). Thanks for injecting some facts into the discussion.

It's good of the wise pundit to dismiss the deaths of slum dwellers as being of little consequence. "...and so decrease the excess population" I guess.

It's not like overcrowded close living among people with lousy healthcare and a desperate need to keep going out in public while ill is likely to encourage any virus to mutate enough so it can endanger 'worthy' people after all.

There's a difference between panic and a hard 'stop, look and listen' when it comes to contagious disease. Our global interconnectivity these days makes the international travel cross-contamination of those dispersing from the Great War look like a glacial crawl.

What these S-M-R-T opiners need to do is viciously poopoo the idiot reactions about 'dirty mexicans', 'illegal immigrants', 'deliberate plague let loose to be an excuse for Obama to declare martial law', 'Biblical End Times' and encourage better community disaster plans knowledge so everyone can feel more empowered to help themselves, no matter how lucky we might end up this time.

Just for a change.

Well, here in the US, we now have our very first death from swine flu: a toddler in Texas.

Tragic, yes, but certainly not a healthy young adult. In fact a toddler is closer to one of the demographics (that being the very young and the very old) more likely to die from good old regular influenza. This, I think, means one of two things:
1. The virus is already mutating into a milder form
2. The virus has not yet mutated into a deadly form
Doesn't tell us much either way, but it's nothing to panic over yet.
Just something to be sad about.