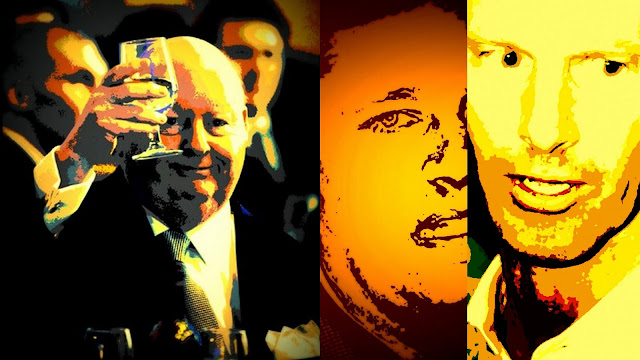 As you know the trial of Mike Duffy resumes on Monday, and as you imagine Stephen Harper must be shaking like a leaf, or a coward in a closet.

Or tossing and turning in his bed at night, wondering when Nigel Wright might be called to the stand.

And asked to explain, among other things, what exactly Boss Harper meant when he told his faithful henchman that the plan to bury a scandal  was "good to go."

Because as Michael Harris writes, while the trial may be farcical.

The trial (or is it ‘smile’?) of the century is about to resume. Before it’s done, Mike Duffy’s day in court could resemble an extended Rick Mercer skit. In the end, the former happy Buddha of the news biz could wind up convicted of … being a senator. (Unless, of course, the Royal Conservative Mounted Police learn that Duffy converted to Islam just before he took all that money.)

There are at least three ways Wright could damage Harper beyond recognition.

If Wright confirms that the PM knew more about the Duffy deal than he told Parliament, nobody will be able to put Humpty Dumpty together again. Nobody likes a liar — especially one who claims to be running the country in the interests of family values. (The Mafia used to say the same thing.)

By confirming what most people in Canada strongly suspect: That when Harper the control freak claimed he didn't know NOTHING about what was going on in his own office, he was lying like a thief.

Just like he almost certainly lied about the circumstances surrounding Wright's sudden departure... 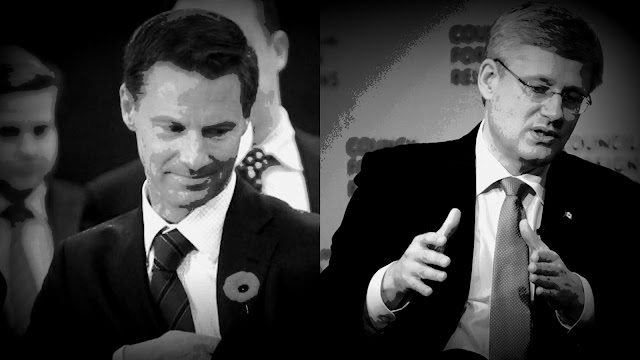 If Wright should state under oath that he resigned his post, the PM will have to explain why he publicly insisted that he had been fired. Spot the liar.

You know, the lie that is reported to have made Wright and his lawyers REALLY angry. For as you can imagine, after having done the honourable thing and resigned, Ol' Nige wasn't too happy to hear Boss Harper claim a few days later that he had sacked him like a servant.

To make it look like he just can't STAND the sight of corruption... 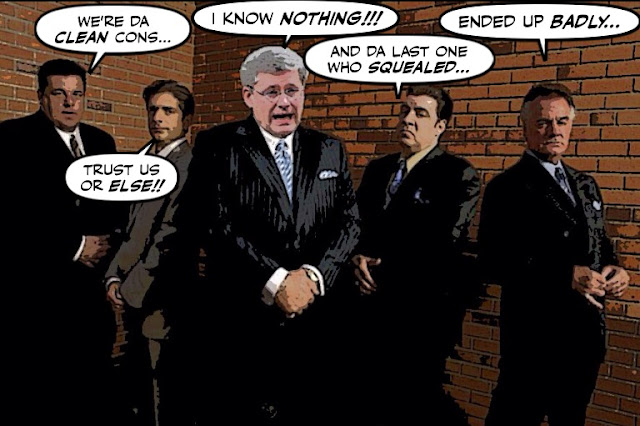 And then of course there's the sordid question of that cash-for-silence cheque that Wright wrote for Duffy to keep him in his words from going "squirrelly."

Finally, there’s the sticky matter of the money. The PM says he didn’t know a thing about the $90,000 gift paid to Duffy by Wright. He says Wright deceived him and everybody else. But the “good to go from the PM” email written by Wright after their February 22, 2013 meeting refers to the earlier cash-for-remorse-and-no-audit deal — when the amount Duffy owed was smaller, and CPC bagman Senator Irving Gerstein was going to pony up the party funds.

The one that must be making Stephen Harper go a little squirrelly himself... 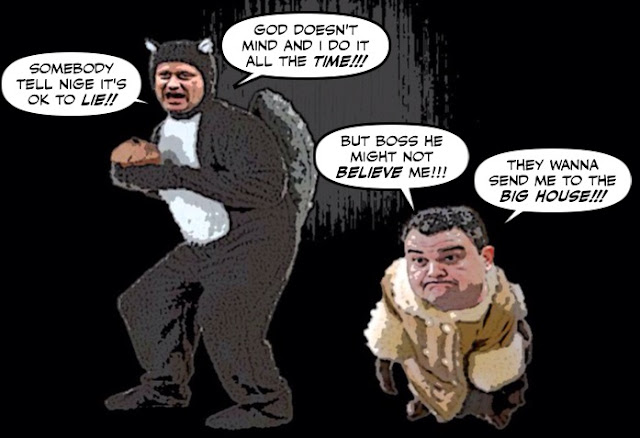 Because he must know that unlike himself, Wright isn't known as a compulsive liar. So he may not cover-up for him.

People who know Wright say he will not. For one thing, he’s a lawyer who understands the oath and, at the best of times, uses language like a man defusing a bomb. This is the worst of times, so Nigel will be checking his zipper twice before leaving the loo. For another, he’s a businessman who could be ruined by taking one for the team, because the truth might seep out elsewhere.

And of course the best news is that whatever happens at the trial, it can only remind Canadians of the Harper regimes's long and sordid record of corruption.

At a time when he's trying to portray himself in his latest ad as Big Daddy, the honest leader of the nation.... 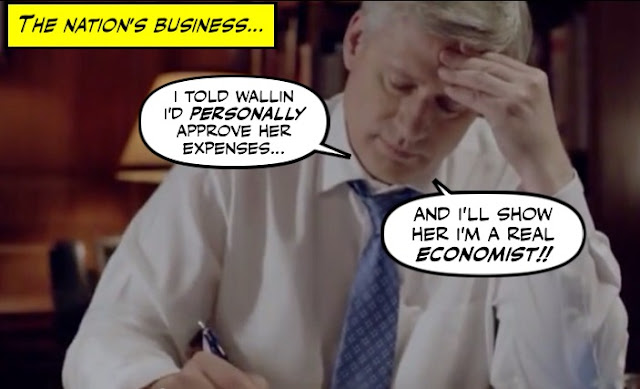 And NOT as this new Liberal version of that ad suggests, as Boss Harper, the grubby leader of the Con mob...

But yes, no wonder he's cowering in his closet, or tossing and turning in his bed.

He must hear the heavy foot steps coming.

And it must be quite a nightmare... 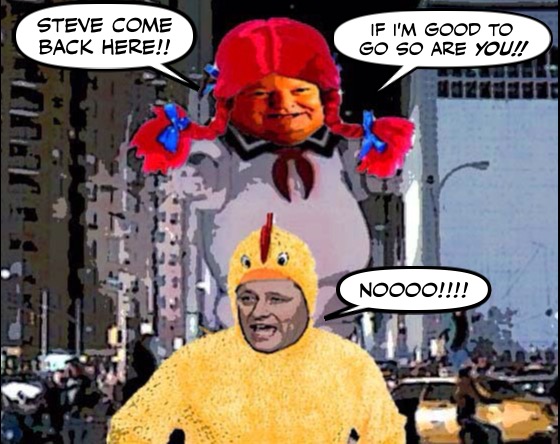 Yup. Get your popcorn now folks.

It's scandal time in Con Canada.

Chicken Harper is on the run. Again.

And about to lose his feathers...

It would make for good theatre to see this chronic pathological liar that hold the PM office take a hard fall, I can't help but wonder if he's behind the scenes pulling the strings, doing anything he can to make this go away. He has managed to corrupt the police force, why not the courts? We are dealing with a very sinister man, one who will not go down without a fight.

Great news. Although I did not always agree with their views the only ministers that seemed to have any principles in Harper's cabinet of bozos were Flahetry, Baird and Mackay. The last just announced his resignation today. Perhaps were can add Wright and Duffy to that list as they were true to a cause they eventually discovered to be bogus. Time will tell but Mackay's departure signals the ship is sinking fast.

Good news or what? The Lieutenant Mckay after Baird the Sargent abandon Harper. Ah spring is in the air and I feel a big orange crush steam roller coming over former Harper con strongholds.

Good news eh I wonder how many more will abandon Steve?

Cheers to you Simon,
What a good day this is,
Mogs

It's time Harper got a good look at the underside of the bus he threw so many under. Payback's a bitch Stevie.
JD

From a CBC list (lost link) I counted 31 MP's stevie has lost/is losing in the last year or so counting those who are not running in the next election. That is something like 20% or so (rough figures). While losing some of them has/would raise the sanity level of the caucus immensely, it means the Cons have lost any possible incumbency advantage in a lot of seats. I wonder just how Con vs MacKay Peter's seat is? :)

And a statement from the Liberal Party on *their* sudden opening on the ballot in Central Nova:

The Liberal Party of Canada confirms that David MacLeod advised the Party of his withdrawal as the Liberal candidate for Central Nova on Wednesday, May 27th. He reiterated to us his strong support for the Party and our Leader. His resignation is for personal reasons and Mr. MacLeod is requesting privacy. We would like to thank him for his hard work on the campaign and wish him success in his future endeavors. A new candidate for this riding will be selected through the open nomination process, the same process used in all ridings. Details about the nomination meeting will be posted on www.liberal.ca/open-nomination as they become available. With Peter McKay stepping down, we look forward to a vigorous open nomination to elect a new representative for the residents of Central Nova. -- Kady O'Malley

What will Nigel say? We can only guess. Harper knows what happened, but we don't know if Nigel will tell. He could also pled our version of the 5th. Harper won't tell the truth, so that is why he isn't a witness. it maybe that they are counting on Nigel Wright to tell the truth, hence he is a witness. no good lawyer asks a question he does not have the answer to already. This is going to be fun.

I think Harper knew Wright was going to make the Duffy "problem" go away (the PM is good to go) and may even have known Duffy was going to be given $90,000 from some source, but didn't know that it was coming from Wright's own funds.

I think MacKay had no principles when it came to his role in government. He sold out to take office. That was the end of any "principles".

I'm not so sure it came from Wrights own funds this Harper Con government has a habit of lies smoke screens and mirrors to pretend they are honest Christians ya right. I go to church Sunday and the rest of the week I bomb the shit out people I am not at war with. Some Christian attitude that is.

hi bcwaterboy...as you know I am deeply concerned about the behaviour of the RCMP, which has been acting like Harper's police. So yes you have to wonder whether this trial will be fair, and whether they will try to steal the next election. Because you're right, Harper is both desperate and dangerous and who knows what he might do?

hi Mogs...yes I'm glad you're as cheerful as I am, because those are good developments. The less incumbents they have the harder it will be for them to hold on to the seats they have. Something is stirring behind the curtain and it can only be good for us...

hi JD...I'm not sure the bus will crush him under its wheels, but it will leave some tire marks on him and he can't afford anymore scandals. The trial will keep him on the defensive and put a fork in his summer BBQ circuit, which will work to our advantage....

hi e.a.f...I have no idea what Ol' Nige will say. But he is a devout Christian and they are not supposed to lie. And I do know that he was very upset to have resigned, only to have Harper make it sound like he had fired him. And that one will almost certainly come back to haunt him...

never trust those devout Christians. Mom taught me that. They went to church on Sunday and ripped off others on Monday.

Parents can play a key role in education sector these are the views of scholars and researchers. They feel that in uneducated areas they need essay help online to first warn the parents about the advantages of education so that they sent their kids to school.