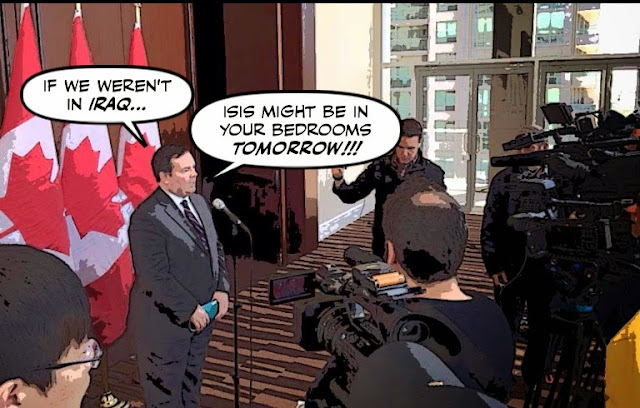 In retrospect it could only be called a triumph of bad timing. For there was Jason Kenney at the Canadian Club in Toronto, puffing out his chest like a chicken hawk, and claiming that the Great War in Iraq was going according to plan.

Despite the setback in Ramadi.

The seizure of Ramadi by ISIS is a regrettable setback, Defence Minister Jason Kenney says, but no indication that coalition forces are losing the battle in Iraq against the militant organization.

"Just imagine if we weren't there, how much more territory they would have claimed," Kenney told reporters following a speech to the Canadian Club of Toronto

Even as the Syrian city of Palmyra was falling to the ISIS crazies.

And just as Jeb Bush was endorsing his Great Leader.

Which can only remind Canadians of how wrong Harper was about the original Great War in Iraq. 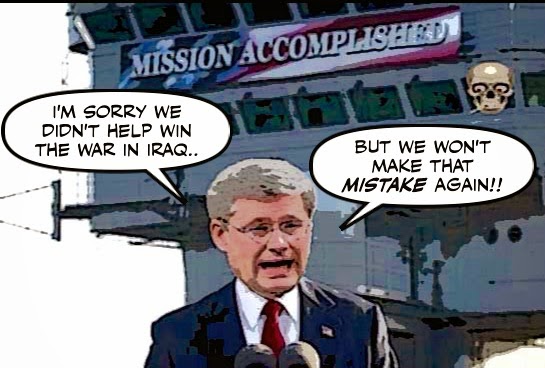 But that didn't stop the Con propaganda machine from taking advantage of the chubby chicken hawk's speech in Toronto, to attack Justin Trudeau on their Facebook site... 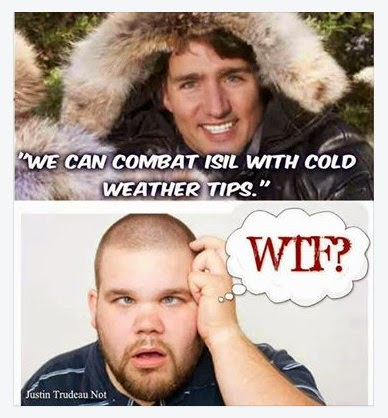 While suggesting again that only the Cons can keep our military strong.

On the same day that David Akin pointed out that the Con's military spending is so woeful or pathetic it should be an election issue.

As Liberal MP Joyce Murray noted when Defence Minister Jason Kenney appeared before the House of Commons defence committee last week, spending on defence, as measured by a percentage of the size of Canada’s economy or gross domestic product (GDP), will bottom in a few years under the Conservatives at 0.89%, the lowest level of defence spending by any federal government since the 1930s.

And has in fact been going downhill since the days when Justin's father was Prime Minister.

Do you know when Canada last spent 2% of its GDP on defence? You might be surprised: It was the government of Pierre Trudeau in 1971-72. We’ve never been above 2% since and the trend line now, under the Conservatives, is going in the wrong direction.

But even that didn't stop the Cons from fluffing their chicken hawk pigeon feathers.

For a few hours later there was Stephen Harper expressing his strong support for the Poroshenko regime in Ukraine. 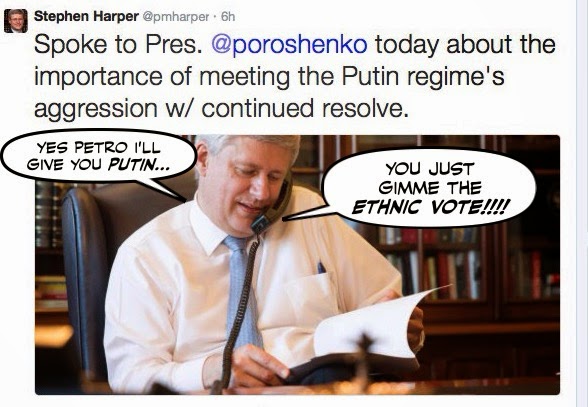 Even as his friend Petro was talking about a "real war" with Russia.

Except that the next election has now become a race against time.

Either we defeat those dangerous hopelessly incompetent Cons, or they will lead us to catastrophe... 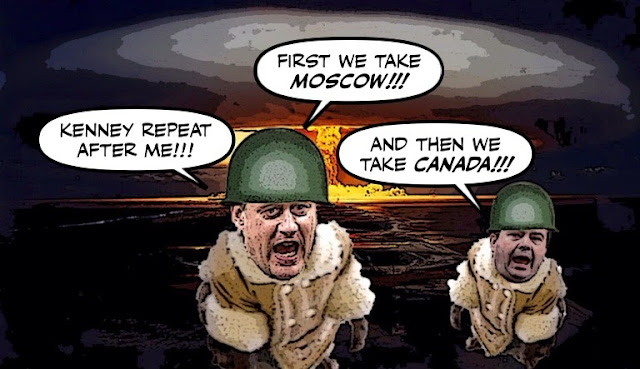 And oh yeah, this one's for Kenney...

If you're religious please pray for our troops.

Or better still, considering the situation.

Please pray for us ALL...

When this lovely war is over? Never humans have a propensity for war I have never seen anything like it in the rest of the universe let alone in the omniverse. What I make of this is that the majority of humans are not human at all they are angry killer robots trained to hate each other from birth. Ya let's sing a song glorifying war and murdering other peoples. How noble is that? That is why you fooled slaves had noblemen in the middle ages they were just better at enslaving you and killing you what was noble about that? Oh and lets not forget after they pillaged you they would rape your daughters and sons. Their appetite was insatiable not much has changed. Kim Jong-un III [Harper] is a prime example I bomb all week then Sunday I go to Christian [Satan's church] and Monday I resume bombing.

I am tired of it all I want to retire elsewhere I have tried to help but to no avail...

People do not see the big picture they have blinders on that society taught them to wear.

As much as i enjoy your blog Mr. Montreal Simon I have to regroup and try and get activists [not nasty ones] to organize to defeat the BC liberals who are in Kim Jong-un's III [Harper's] back pocket. And the Harper who has turned us into the 'North Korea' of North America. By the way I am learning sewing as I can no longer be a Master Carpenter/Joiner because of my knee injury and my first sewing project was in honor of your blog a flag "In case you haven't noticed" [your words] I sewed a rainbow flag. It is beautiful my wife likes it too. It has the seven colors of the rainbow.

Cheers buddy cheers keep up the good work do not stop until we defeat the Harper-con beast...
To be continued.
Mogs Moglio

Speaking of Chicken Hawks. I thought we were in a war with ISIS? Our biggest problem not enough targets? So WTF is going on here?

Fact or fiction: Have the Cons REALLY spent more money on military spending compared to the Liberals?