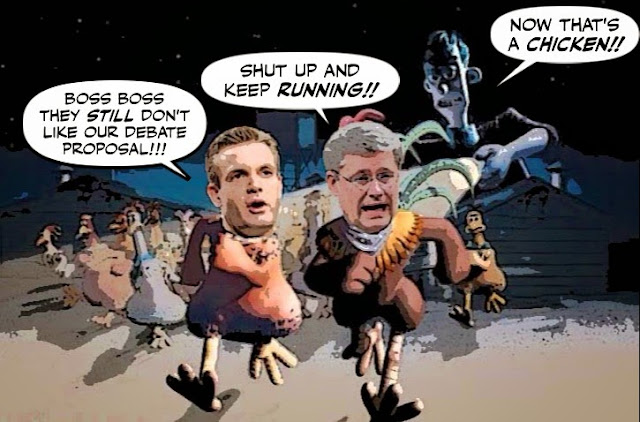 They want to hold their own mini-debates, and prevent as many Canadians as possible from watching them.

So they won't take part in any organized by the country's major broadcasters.

The Conservatives have rebuffed the latest offer from Canada's major broadcasters to host two nationally televised leaders' debates at the height of the federal election campaign.

Even though only they can deliver a massive audience, and provide French Canadians with the country-wide coverage they deserve.

And the fluffer and failed TV executive Teneycke, couldn't be more brutish.

"If they don't, because they're scared, then they won't."

When nobody is more scared to have his ghastly record attacked on TV in front of millions of Canadians, than Chicken Harper himself... 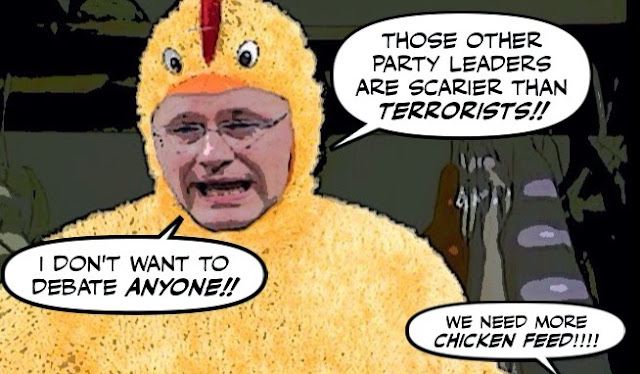 Because he is a Great Chicken Leader, as well as a Great Closet Leader, and this is just the latest example of his ghastly cowardice.

It really is beyond belief what those Cons are doing to our country and our democracy.

But the good news is this latest outrage will only reinforce the impression left by his not to heroic ordeal in that closet.

And he can forget about trying to portray himself as a Great Strong Leader from now on. For nobody will believe him. And we WILL use that against him.

We can ridicule him on social media. We can put up posters in our neighbourhoods, or turn up at his rallies dressed as chickens, or make clucking sounds wherever he goes.

Even greet him all over the country with a little chicken dance...


Yup. Let's make him pay the price for being such a coward.

Let's brand him as a chicken. Let's embarrass him beyond recognition.

Let's have a little fun, and laugh him out of office... 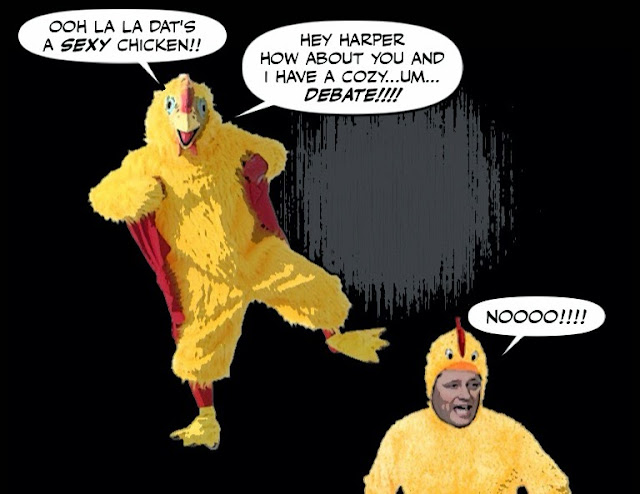 The opposition parties should all buy ads which say something like "If he doesn't even bother even to show up for the TV debate that will have the widest national audience, how do you think he will be accountable to you if you re-elect him" ?

Obviously he is scared to have the opposition leaders hold his feet to the fire for all his misdeeds in front of many Seniors, his strongest supporters, who will be mainly watching through the TV and not other media.

What is Kory Teneycke on??? He talks like a drugged robot. Watch him as he listens to Rob Silver:

Wouldn't you like to hear Harper actually answer (not deflect) these questions on TV during the debates?

This would make a great TV/social media ad during the election campaign...

Back in 2005, Opposition leader Harper said: "My instinct is when somebody doesn't answer questions, even simple and fairly innocuous questions in a straightforward manner, there may be something else."

What a poor excuse for a P.M. and a sad sack of shit, passing himself off as a P.M..

And most of the MSM (mainstream/lamestream media) seems afraid of Harper. The only people out there who aren't afraid to strongly criticize Harper and the Cons are: Simon, Michael Harris, The Tyee, and a few cartoonists such as Greg Perry.

Looks like Harper's plan to turn down the 2 consortium debates (one English/ one French) is backfiring on him:

hi Kathleen...yes that's what I was saying as I dressed Harper up on one chicken suit after the other. Seb had to drag me away from the computer I was having so much fun. But I must say yellow does suit him...;)

hi anon...yes that is a good idea. The opposition parties must really go after the Cons on that one. And if the are aggressive enough they can strip Chicken Harper of his tail feathers before the debates even begin...

hi David...I don't know, but I saw that interview and he did look awful. He has aged incredibly in such a short time. But then the Sun TV experience must have shaken him to his core, and going back to work for the PMO at a time like this one is hardly what I would call therapy... ;)

hi David...thanks for that one, I've saved it for my video archives, and will hand it over to the Chief Prosecutor at the Harper trial after I've finished with it...

hi e.a.f.... now that's the spirit !!! Just remember to flap your wings when you say it, as I've been doing all day. To have Stephen Harper morph into a chicken is more than even could have hoped for.... ;)

hi David...yes I know. Part of the problem is that the publications like the Globe and Macleans are all in there going after a slice of the pie. But then the MSM has let us down from the moment the Cons came to power...

Hi David...I'm pretty sure that they will be forced to agree to a debate on Radio Canada, for depriving French Canadians in other parts of Canada of a chance to watch a French-language debates would kill them in Quebec...

Chicken Little is trying to rig the Federal election to his advantage again. The Harp is controlling the venue and the agenda. He will use any means necessary to retain his divine right to rule. Forget democracy and freedom of the press. He only wants to talk about his oh so equal budgetary solutions really only for the few and terror, terror, terror. Lets all vote for the Harp or else are daily lives may be turned upside down by the squirrely bunch of Tories led by a master puppeteer.