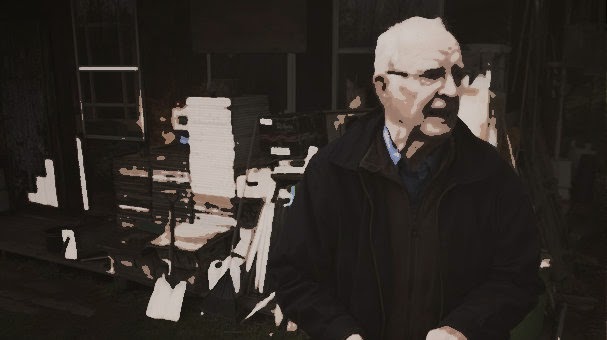 As the world celebrates V-E Day, on the 70th anniversary of the great victory over the Nazis.

And Stephen Harper uses the occasion to celebrate himself.

A disturbing question must be asked.

Are him and his foul Con regime sheltering a Nazi war criminal?

Russian authorities are asking Canada to extradite an alleged war criminal of Ukrainian ancestry who’s lived here for more than 60 years, a request that appears designed to embarrass Ottawa while relations with Moscow remain frosty over President Vladimir Putin’s aggression in Ukraine.

The Investigative Committee of the Russian Federation, a law enforcement body that reports only to Mr. Putin, on Friday called on Canada to deliver Vladimir Katriuk, a Quebec beekeeper now in his 90s, to Moscow so he can be tried for alleged war crimes.

For whatever spin the Globe may choose to use to report this story, it was a monstrous massacre. 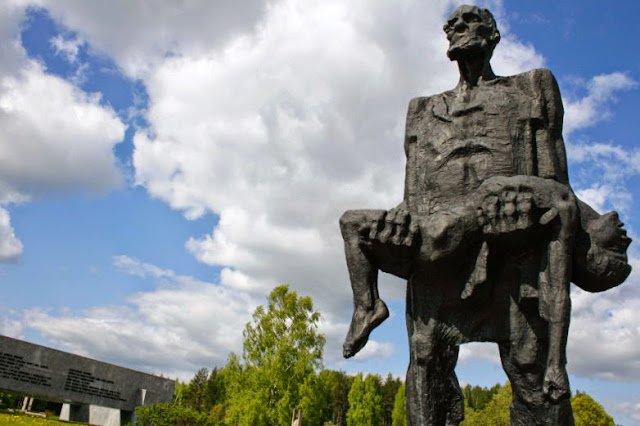 Khatyn or Chatyń was a village of 26 houses and 156 inhabitants in Belarus, in Lahoysk Raion, Minsk Region, 50 km away from Minsk. On March 22, 1943, the entire population of the village was massacred by the 118th Schutzmannschaft Nazi battalion. The battalion was formed in July 1942 in Kiev and was made up mostly of Ukrainian nationalist collaborators from Western Ukraine.

A horrifying crime against humanity.

Troops from the Dirlewanger Brigade, a unit mostly composed of criminals recruited for anti-partisan duties, entered the village and drove the inhabitants from their houses and into a shed, which was then covered with straw and set on fire. The trapped people managed to break down the front doors, but in trying to escape, were killed by machine gun fire. 147 people, including 75 children under 16 years of age, were killed — burned, shot or suffocated in fire. The village was then looted and burned to the ground.

And even though Jewish groups and even some of their own MPs have called for action.

Russia’s request shines a spotlight on a case that has upset Jewish Canadians and war-criminal hunters for years. In 2015, the Simon Wiesenthal Center’s Annual Nazi War Criminals Report ranked Mr. Katriuk second on the list. Back in 2012, Conservative MP Mark Adler suggested via Twitter that Mr. Katriuk needed to leave. “Vladimir Katriuk hid his past as a Nazi collaborator. We must never forget. Collaborators’ lives shouldn’t end on a soft Canadian pillow.”

On Friday, the Harper government refused to address the request and instead immediately shifted the topic back to to Russia’s aggression in Ukraine. “While I cannot comment on any specific extradition request, to be clear, we will never accept or recognize the Russian annexation of Crimea or the illegal occupation of any sovereign Ukrainian territory,” said Clarissa Lamb, press secretary for Justice Minister Peter MacKay.

For they will do ANYTHING to pander to the ethnic vote. And this couldn't be more outrageous.


Did you see this ad this week in a Ukrainian-Cdn newspaper? (Toque tip to @LP_LaPresse ) pic.twitter.com/UCb4Jf3Uah
— David Akin (@davidakin) May 9, 2015


Are those grubby Cons seriously suggesting they are GODLY? Is that Jesus Harper and his twelve disciples?

OMG. How low can they go? Boss Harper really will do ANYTHING to win the next election.

And all I can say is aren't you getting tired of the way the Cons are using ethnic politics as a blunt weapon against the rest of us?

Will there not be justice for the murdered men, women and children of Khatyn?

When can we take our country back?

Send the Cons back to Alberta Paraguay.

And fire this morally depraved leader... 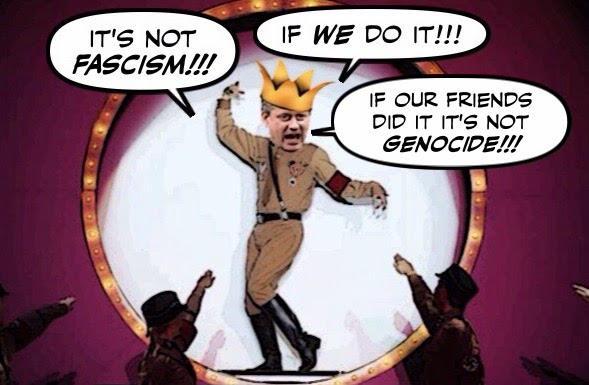 There are about the same number of Ukrainian-Canadians as there are Canadians of First Nations ancestry
(about 1.2 million each)

But as most First Nations don't vote, he could care less. Remember when he told Peter Mansbridge in an interview that an enquiry into missing and murdered Aboriginal women isn't on his radar:

Do you think all Ukranian Canadians will respond to this? Most that I grew up with don't even buy this paper. Most that I grew up with had parents who came early in the twentieth century and they have integrated and intermarried. They may or may not send their children to Ukranian language classes but they don't read that paper and they are too smart to be fooled. They have the same loyalty to Ukraine as I have to Slovakia which is where my father parents came from in 1892, which is none.

Oh you can send them here to Alberta if you want, Simon. Their reaction would be priceless.

Fascinating...I have never understood why Khadr gets stonewalled by the Cons, and this creep gets protected...
The maternal side of my family are Ukrainian and Polish Jews, and according to my family history, the Ukrainians were often the gleeful supporters of Nazi occupation, and they made willing and enthusiastic concentration camp guards..this is another example of what can happen when Canada decides that the Cold War of the 50's is back, and Russia is the devil incarnate..
How could the Cons here support the rightwing zealots in Ukraine now and simultaneously turn this war criminal over to the Russians without looking like the hypocrites they are?
Answer: not gonna happen...

Um ya okay right it is alright harboring a mass murderer that committed WAR CRIMES but Omar must be persecuted at all costs. Does anyone else see how insane this is? I hope the Ukrainian population sees this that Harper is harboring a Ukrainian war criminal that slaughtered a ton of their own people.

Putin understands Geo-politics Harper does not and Putin cleverly is out maneuvering Harpo in that chess game. This news could not have come at a better time. Now we know Harper supports war crimes and wants to punish children. Canada was one of only two UN members that refused to support the vote for the ban on Nazism. Now we know why Harper is a Nazi at heart...

Mr. Katriuk probably dines in secret with Mr. Harper. And Putin demanding his extradition is doing it to Harper because he knows it is an election year. Things are fading to black for Harpo this is going outrage many Canadians it has pissed me right off if I did not hate Harper before now I despise him.

It would be interesting if Putin did a big press release in the E.U. and N.A. about this. Putin is so much smarter than Harper, and in the end, it might just be that harper goes and Putin stays. I just don't get why Steve dislikes Putin so much. they are so very similar and Steve is taking Canada into the direction Putin has taken Russia, ya, know, silencing the press, one way or another, changing legislation to deal with your enemies, so now the question not only is what is the difference between the Cons and the H.A., what is the difference between Putin and Harper? Putin wears better suites and not as much make up. Oh, and I think Putin really is tough, Steve, not so much.

Harper in a hand bag a very depressed man.