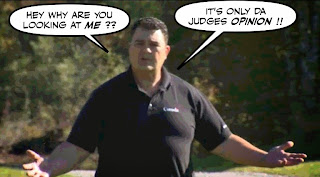 Uh oh. Beat a drum slowly. Or if you're in the Harper PMO beat a gong furiously.

A judge has found Peterborough, Ont., MP Dean Del Mastro guilty of spending too much in the 2008 federal election and falsifying a document to cover it up. Del Mastro now faces the prospect of losing his seat in the House of Commons and possibly being sentenced to up to a year in jail and a $2,000 fine.

And despite what the Office of the Commissioner of Elections says:

"Anyone convicted of having committed an offence that is considered to be an illegal practice under the act is not entitled to be elected or sit in the House of Commons for a period of five years from the date of conviction," Michelle Laliberte, a spokeswoman for the Office of the Commissioner of Elections, told CBC News.

The Deaner is undaunted.

Speaking to reporters outside the courtroom, Del Mastro indicated that he has no plans to vacate his seat. "I intend to still occupy it. I've got a mandate from people in the city of Peterborough." The judge's ruling "was not a final decision," he added. "I've in no way broken any of the laws governing elections." He seemed unfazed by the judge's finding that his testimony wasn't credible. "I know what the truth is. That's her opinion. My opinion is quite different."

And says he's planning to appeal. Despite what his lawyer says:

His lawyer, Jeff Ayotte, appeared to downplay the likelihood of an appeal. "Issues of credibility are difficult to appeal," he noted. "At this point it's tough to say if we will appeal at all.… It's certainly impossible to say at this time on what grounds we would appeal."

And all I can say is it doesn't look good eh?

And boy are we going to miss him.

For how can we forget the way as Stephen Harper's PARLIAMENTARY SECRETARY, charged with the ETHICS dossier, he defended the Con record... 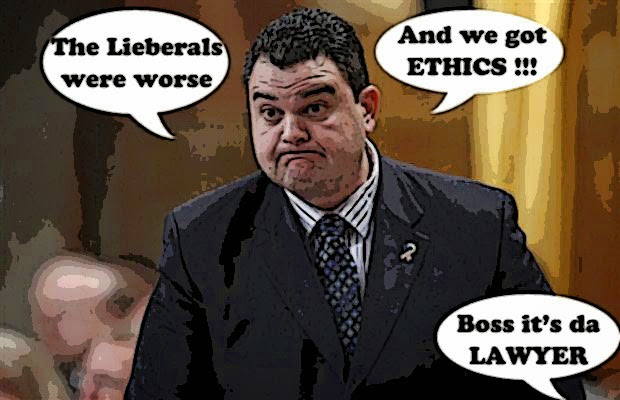 Or the way he went after their enemies, like Adam Carroll in the famous Vikileaks case... 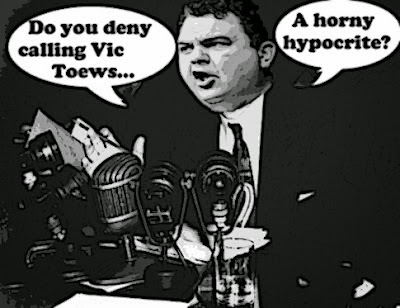 Or the hungry way he went after the CBC... 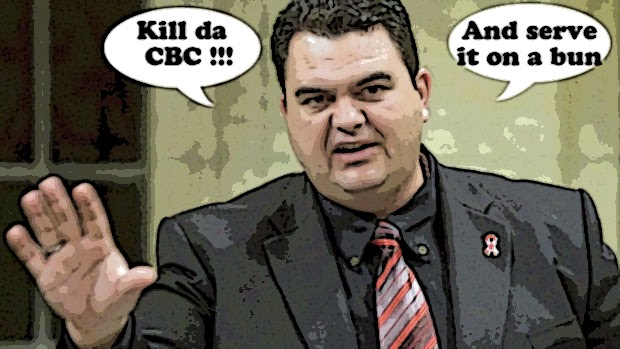 Who can forget the colourful way he answered questions in the Commons?

Or this moving moment...

But of course Canadians will draw their own conclusions. Like the judge did:

In her decision, Judge Lisa Cameron said that in her view, from the timing of the contract and its language, it "is plainly a contract for election services." She also said that she found Del Mastro wasn't credible, "frequently obfuscated" during his testimony and that there were a number of inconsistencies.

And I'm sure they will remember that the Deaner may be the latest Con to get in trouble... But there are so many others... 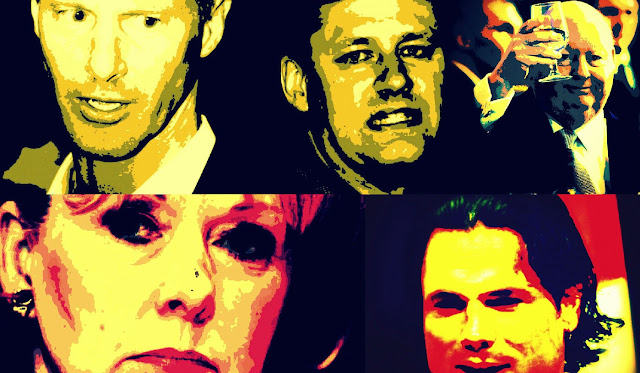 And they were ALL appointed by Stephen Harper.

Who must be deeply worried about the effect all of this could have on his own good reputation.

If he had one.

For who can forget the way Boss Harper defended his faithful Parliamentary Secretary...

Until he dumped him like a sack of potatoes.

A spokesman for Prime Minister Stephen Harper said the government accepts the court's decision. "Mr. Del Mastro has not been a member of the Conservative caucus for some time," Jason MacDonald told CBC News by email.

Except that I have a feeling that the Deaner is still going to play a BIG role in the next election campaign.

And that if after the Cons are defeated, they decide to hold a reunion.

I hope they invite me eh?

Del Mastro was interviewed (via phone) a few minutes ago by Rosie Barton on CBC's Power & Politics. He said he has a right to an appeal, and claims there is "new evidence" he would introduce. He also said he has every intention of running again in 2015 but first has to concentrate on the appeal.

Dean the dishonourable should have a little more respect for the learned and Honourable Ontario Court Justice Lisa Cameron.Referring to Justice Cameron as her shows disrespect.The justice's opinion does count and better watch you don't get a warning about contempt from your lawyer.

As for you Dean,you're opinion no longer counts.Not everyone in Canada is gonna fall for your BS or crocodile tears.Jeeez man,grow up and take responsibility.

Awesome piece once again, Simon! Of course, I did have a chuckle.........the ending is powerful!

Del Mustro's comments regarding the Judge were hilarious. He must think he is more important than the judge. Yes, he most likely does think that. The cons don't have must respect for Judges because the Judges at the Supreme Court of Canada, have more than once turfed con legislation. Del Mastro most likely thinks a Judge's decision doesn't apply to him, because, well he was stevie's mouth piece.

Now we have to see if he comes and sit in his seat in the House of Commons and what will happen if he does and will any of the cons defend him. That will be the "really really big show" as Ed. Sullivan used to say.

When the election comes it might be best if the opposition parties simply ran a list of con appointees who "violated" the law, that ought to demonstrate the cons are cons and not fit to be M.P.s. Then if another party lists the violations of our democracy, that would help and Ms. May could list the violations of the environmental policies which the cons ignored. Yes, each of the 3 parties take a "piece of the action"

Then the electorate can just vote which of the 3 other parties they want, because no one ought to want the cons. O>K. I forgot the Quebec M.Ps some are from other parties and I expect them to point out how poorly Quebec has done under the con regime and how poorly their culture was represented by the cons. Yupp that ought to it. A coaltion of all the parties would be much better for Canada. They can rotate the Prime Minister ship, if they have to and can take turns living at Sussex Dr, Oh, and nobody uses the government jets. They all fly commercial.

I like the way the Del Mastro court decision was introduced by Carol Off on CBC's As It Happens:

A man of strong convictions -- three of them.

"Dean’s done — and Harper’s eye for talent is as keen as ever" by Michael Harris
http://www.ipolitics.ca/2014/10/31/deans-done-and-harpers-eye-for-talent-is-as-keen-as-ever/

The judge found Del Mastro and McCarthy guilty on all counts, although the fourth was stayed at the request of the Crown, as it was the same as the third.

This is what I love about Conservatives. They talk a great deal about law and order for the rest of us but when it comes to their own breed, they can't take responsibility for their own actions and own up it like adults. There is truly a sense of entitlement here that the rule of law just doesn't apply to these scumbags because their greater mission in life (to keep Liberals from power) is worth breaking any law and skirting any rule. , Perhaps Del Mastro would prefer to be hauled away in handcuffs to force him to 'step down' because this is what is badly needed to bring people like this back down to Earth.

I like how this song uses Dean's fake crying: